Is it possible to draft the ultra-Orthodox and integrate them into Israel's society and economy in a mutually-agreeable manner that encourages solidarity between the different sectors of the Jewish people? Prof. Yedidia Z. Stern shares thoughts on wars between brothers and brothers-in-arms. 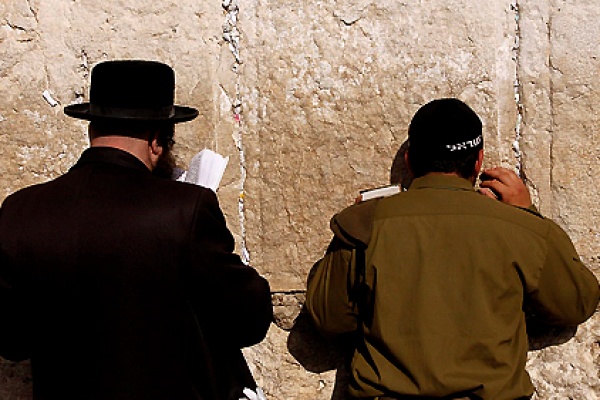 Few issues have occupied Israeli society for as long and with as much passionate debate as the ultra-Orthodox draft.  The intensity and tenor of that debate has grown to a deafening roar over the past year, resulting in the downfall of the last government, serving as a central issue for voters in the last elections, and occupying the heart of the negotiations that led to the current coalition. A parliamentary committee is currently refining legislation on this issue that the Knesset will vote on in the fall. Will the resulting arrangement mend relations between the Haredi community and the State of Israel or trigger a culture war between Jews? Is it possible to draft the ultra-Orthodox and integrate them into Israel's society and economy in a mutually-agreeable manner that encourages solidarity between the different sectors of the Jewish people?

First, the facts: Israel's ultra-Orthodox community numbers some 700,000 people, which is approximately 10% of Israel's population and 12% of its Jewish population. The community’s growth rate is extremely high; about half of Haredim are children under 14. Some 20% of Israeli elementary school students attend ultra-Orthodox schools, which represents an increase of over 50% in the past decade. Approximately 7,000 ultra-Orthodox men become eligible for the draft at age 18 each year. The overwhelming majority of them defer conscription by committing to full-time Torah study, which also precludes them from working. The employment rate among Haredi men aged 25–64 stands at only about 40%, leading to the troubling situation of 56% of ultra-Orthodox families being officially defined as poor. Moreover, the opportunity cost to Israel's economy overall is staggering; economists estimate that the Israeli economy loses over 8 billion NIS ($2.2 billion) a year because Haredi men do not work.

In the last decade, changes in ultra-Orthodox society have begun to erode the walls surrounding the community. The current Haredi leadership is less concentrated and hierarchical than previous leadership, and members of the community have direct access to information via the Internet. Recent years have seen a significant rise in the participation of ultra-Orthodox men in military and civilian service, university and professional studies, and the labor market. The deterioration of the community's economic situation has spurred the younger generation to consider a more productive lifestyle. These changes have been taking place with the tacit consent of the ultra-Orthodox leadership and sometimes even their overt encouragement, and seem to reflect a profound process of social change in the ultra-Orthodox public.

While the number of ultra-Orthodox men serving in the IDF and civilian service has increased eightfold in the last six years, the overall national service rate is still disappointing; only a third of the cohort, some 2,500 men, serves in any way. For this reason, in 2012 the Supreme Court struck down the Tal Law, which had permitted a blanket deferral of military service for all Haredim, and ruled that it is contrary to the principle of equality. The Court tasked the Knesset with arriving at an alternative arrangement.

Following my service on the later-disbanded Committee to Advance Equality in Sharing the Burden (Plesner Committee), I drafted, in conjunction with my colleague at the Israel Democracy Institute Attorney Haim Zicherman, a proposed framework for the ultraOrthodox draft, which strikes a balance between the principle of equality and the value of Torah study. Exempting an entire sector from the draft is intolerable because it is discriminatory. Equality is both an ethical goal and a fundamental right in the Jewish and democratic state. It is not, however, an absolute value. In this case, equality must be weighed against the value of Torah study—a value that is of national importance, contributes to Israel’s unique identity as the nation-state of the Jewish people, and is the means by which the ultra-Orthodox define their lives. But Torah study is also not an absolute value. Both these values must be balanced while striving for a third value: social solidarity.  How can this be done?

A precise definition of the problem is necessary to arrive at a solution. Ultra-Orthodox rhetoric portrays military service as a waste of time that detracts from Torah study. This is nonsense: saving lives is a central precept of Jewish law. In truth, the Haredi leadership is afraid that army service will erode the ultra-Orthodox identity of the younger generation.

The Haredi rabbis are right: An 18-year-old from a religious ghetto is likely to have difficulty maintaining his Haredi lifestyle in the adrenaline-laden environment of an infantry platoon. A liberal society should not use the compulsory powers of the state, in the form of the mandatory draft, to alter the identity of its citizens. Accordingly, ultra-Orthodox men should be allowed to postpone their military service until after their religious identity is firmly established. A higher draft age, however, would decrease the caliber of service, increase its financial cost, and limit the contribution of Haredi soldiers to the army.  A reasonable balance between these conflicting considerations calls for conscripting the ultra-Orthodox at age 22, when 73% of Haredi men are already married and have firmly consolidated their identity, but are not yet burdened with supporting a large family. If these men serve for two years, they can begin their professional studies and economically productive lives at 24, the age when the average Israeli starts college.

Consensus must also be reached regarding the number of Haredi men who will be drafted. Experts estimate that two-thirds of ultra-Orthodox young men would like to enter the working world. They wish to make a decent living while maintaining a Haredi lifestyle, but remain in yeshiva because of political, social, and institutional barriers within the ultra-Orthodox community. For this reason, the new legislation should set conscription rate targets which will draft at least 2/3 of Haredim who are not fully committed to Torah study by 2019.

The Knesset is considering the alluring idea of imposing criminal sanctions on ultra-Orthodox who will not serve.  However, this is a strategic mistake.  The ultra-Orthodox public will rally around its most extreme leaders if young Haredi men are sent to prison en masse. Such a scenario will lead to one of two disasters: either civil war will break out in Israel, or the State will retreat and not enforce duly passed legislation, thereby undermining the rule of law.

How then, can the objective of conscripting 2/3 be achieved? The Israeli government currently allocates roughly 1 billion NIS ($280 million) a year to support Torah study. This is a significant sum without which the Torah world cannot exist. This allocation should be reduced annually if the ultra-Orthodox community and its institutions do not meet the conscription goals prescribed by law.  On the other hand, state allocations should increase if the goals are met.  This arrangement will provide the right incentives for the Haredi spiritual and political leadership to remove the internal obstacles that prevent yeshiva students from leaving the yeshiva. The "community of scholars" may grow smaller, but it will be of a higher caliber, free of pretenders, and worthy of its name.

It is important to stress that ultra-Orthodox service must be in the IDF, not in civilian service. The combination of long sidelocks and army berets, of soldiers bearing arms and religious books, will be a powerful symbol of the shared destiny of all Jews, both for Israel's general public and for the ultra-Orthodox sector. Civilian service cannot yield this important symbolic achievement.

It must also be noted that military service of thousands of ultra-Orthodox men is liable to change the character of the IDF. Ultra-Orthodox soldiers will demand service in separate units in order to protect their lifestyle, which may lead to the exclusion of women from certain positions and army bases. Any arrangement must ensure that no group is excluded in order to meet the needs of another. A balance must be struck that will protect the heterogeneous nature of the army and prevent the exclusion of women from any role.

Ultimately, the conscription law must be a balanced arrangement that reaches consensus among Israeli Jews on sharing the burden of sovereignty. A large group of ultra-Orthodox men, but not more than one-third of the cohort, will continue to contribute to the country through Torah study; the majority, however, will be drafted into the IDF at an age and under conditions that enable them to preserve their religious identity and lifestyle.

Retired Supreme Court Justice Ayala Procaccia has said that equal conscription must be reached “step by step, without breaking the existing system, without destroying the delicate social-human fabric, without wielding an axe that is likely to cause irreparable damage to society.” What is needed is “a path of respect and understanding of the other, while constantly striving for rapprochement.” We would do well to heed her words.

Prof. Yedidia Stern is Vice President of Research at the Israel Democracy Institute and a Professor of Law at Bar-Ilan University.

A version of this article was published in the Jerusalem Report as "War Between Brothers in Arms" on August 21, 2013.