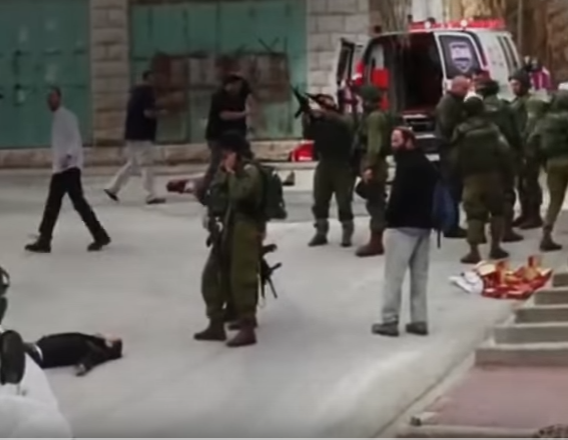 Today, the IDF's military court will hand down its verdict in the case of Elor Azaria, the soldier accused by the military prosecutor of shooting and killing a terrorist who no longer constituted a clear and present danger.

It is an appropriate moment to recall the recent experience of another soldier in another army.

On the morning of September 15, 2011, Taliban troops attacked a British forward position in southern Afghanistan’s Helmand Province. An Apache helicopter was sent to repel the attack, and its pilot radioed that he had scored several hits. A Royal Marines patrol dispatched to the scene discovered among the casualties a wounded Taliban fighter.

What happened next was recorded on a video camera affixed to the helmet of one of the British troops.

The commander of the squad, Sgt. Alexander Blackman, ordered his men to move the wounded terrorist to a patch of ground not under camera surveillance.

He also instructed a medic to withdraw from the area. Blackman then shot the terrorist in the chest, and while doing so muttered his own version of a line from Shakespeare’s Hamlet: “Shuffle off this mortal coil, you c**t. It’s nothing you wouldn’t do to us.”

Almost a year later, British police came across the video while investigating an unrelated crime. They passed it on to the British Armed Service Prosecuting Authority, which recommended that all members of the patrol be court-martialed for murder. This was the first time since World War II that British soldiers on active duty had faced such charges.

Two of the suspects were released as soon as the trial commenced in October 2013. Two other members of the patrol were subsequently acquitted, leaving Blackman as the only defendant to be convicted.

The military court handed down its verdict in November 2013. It rejected Blackman’s claim that he had acted out of fear that the wounded captive was still capable of endangering the troops under his command, and convicted the sergeant of murder.

Addressing Blackman, the presiding judge was adamant: “You treated that Afghan man with contempt and murdered him in cold blood. You have betrayed your corps and all British service personnel who have served in Afghanistan, and you have tarnished their reputation... While we acknowledge your personal circumstances and the immense pressure you were under, we note that thousands of other service personnel have experienced the same or similar stresses. They exercised self-discipline and acted properly and humanely; you did not.”

He added: “If the British Armed Forces are not assiduous in complying with the laws of armed conflict and international humanitarian law, they would become no better than the insurgents and terrorists they are fighting.”

Subsequently, Blackman was sentenced to 10 years’ imprisonment and given a suspended sentence of a further 20 years.

The “Helmand Incident,” as it came to be called, immediately became a cause celebre in Britain. The BBC broadcast portions of the incriminating video, which was also made available online and raised an outcry.

The press covered the trial extensively.

Blackman’s family campaigned vociferously in his defense. His immediate commanding officer published an open letter expressing his full support for Blackman, a soldier with a spotless 15-year record of service, who had frequently displayed courage under fire.

Opinions concerning the Helmand Incident polarized still further once sentencing passed. Among those who justified the severity of Blackman’s punishment was General Sir Nicholas Houghton, supreme commander of the British armed forces, who firmly stated: “Murder is murder. This is a heinous crime.”

Others voiced a very different view.

Several retired officers publicly decried the court for not sufficiently taking into account the complexity of the situation in Afghanistan, Blackman’s record, or how the sentence might affect the fighting spirit of other troops ordered into action.

Encouraged by The Daily Telegraph, a respected national newspaper, over 100,000 citizens signed a petition on Blackman’s behalf. Furthermore, and notwithstanding a directive issued by the defense minister, over 1,500 servicemen in civilian dress marched in protest against the sentence in central London. In October 2015, the commander of a Royal Marines regiment resigned his commission in protest at what he called the military command’s betrayal of its troops.

Despite the firestorm of public controversy, the court’s sentence stood.

Blackman’s repeated appeals for alleviations in his punishment (the most recent lodged just last month) have generally been rejected, although an approach to the Appeals Commission has been allowed.

There are several obvious differences between the Helmand Incident and the Elor Azaria affair: the arenas in which the shootings took place are totally dissimilar, as is the status of the two soldiers – one a long-service professional in an all-volunteer force, the other a young conscript. But there are also similarities: the tumultuous political and public debate, the mass mobilization of civilians and soldiers on behalf of the accused, and the criticisms leveled at the judicial system.

Surely the most important lesson to be learned from Blackman’s case, however, is that the legal process is being allowed to run its course. For the sake of Israel’s democracy, that must also be the outcome whether Azaria is acquitted or found guilty.

This article was first published by the Jerusalem Post.