The people had their say in these elections. A majority of the Arab Israeli public (65%) turned out to proclaim a resounding vote of confidence in the Joint List.

The elections for the 23rd Knesset brought with them an unprecedented success for the Joint List, as it won 15 seats in the Knesset—the largest number of seats ever won by Arab parties in Israel’s national elections. Moreover, the Joint List also attained historical firsts in several other respects. This was the first time a woman was elected to the Knesset from all of the four parties that make up the Joint List: in total, four Arab women were elected, comprising 27% of the Joint List’s Knesset members. The List is also the Knesset faction with the greatest diversity among its members: ten Muslims, three Christians, one Druze, and one Jew. 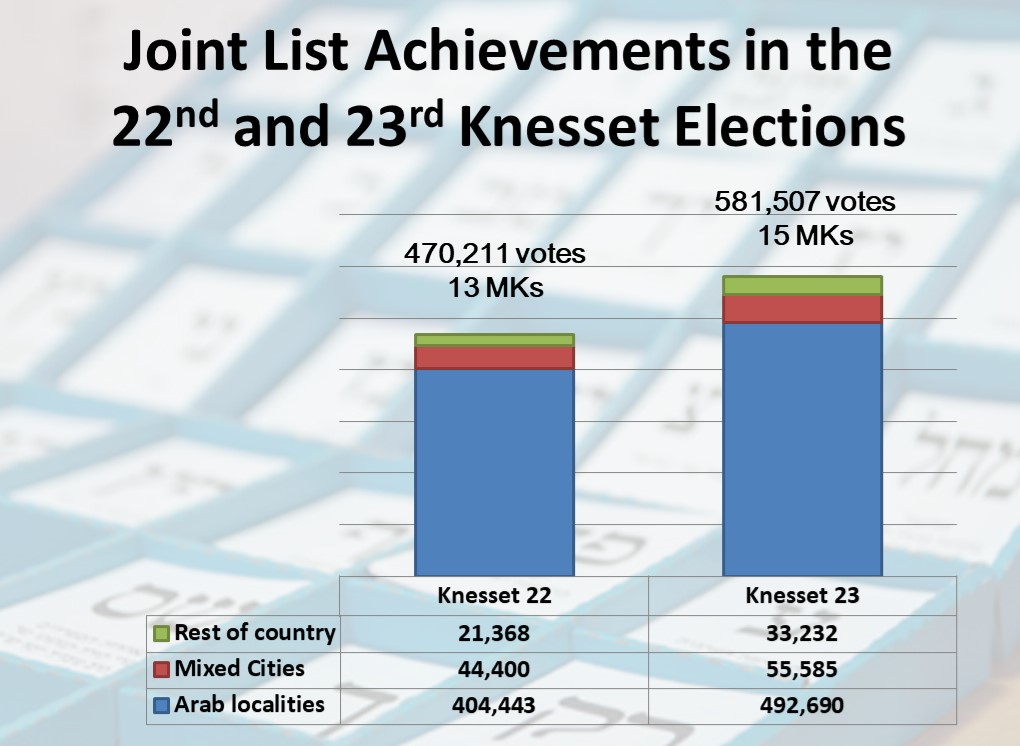 These historical milestones were achieved thanks to a dramatic rise in voter turnout in Arab towns and cities, which reached its highest level of the last two decades—64.8%-even higher than the turnout in the elections to the 20th Knesset (63.4%), when the Joint List was first formed. Another notable result highlighting the unprecedented achievement of the Joint List in these elections, was the number of votes it received outside of Arab towns and cities, yielding it more than two Knesset seats. In these elections, among the total number of Joint List votes, the proportion of those from mixed cities and with other locales was the highest ever: (15.3%), even higher than in the elections to the 22nd Knesset (14.0%) and the 20th Knesset (13.2%) when the Joint List was formed. 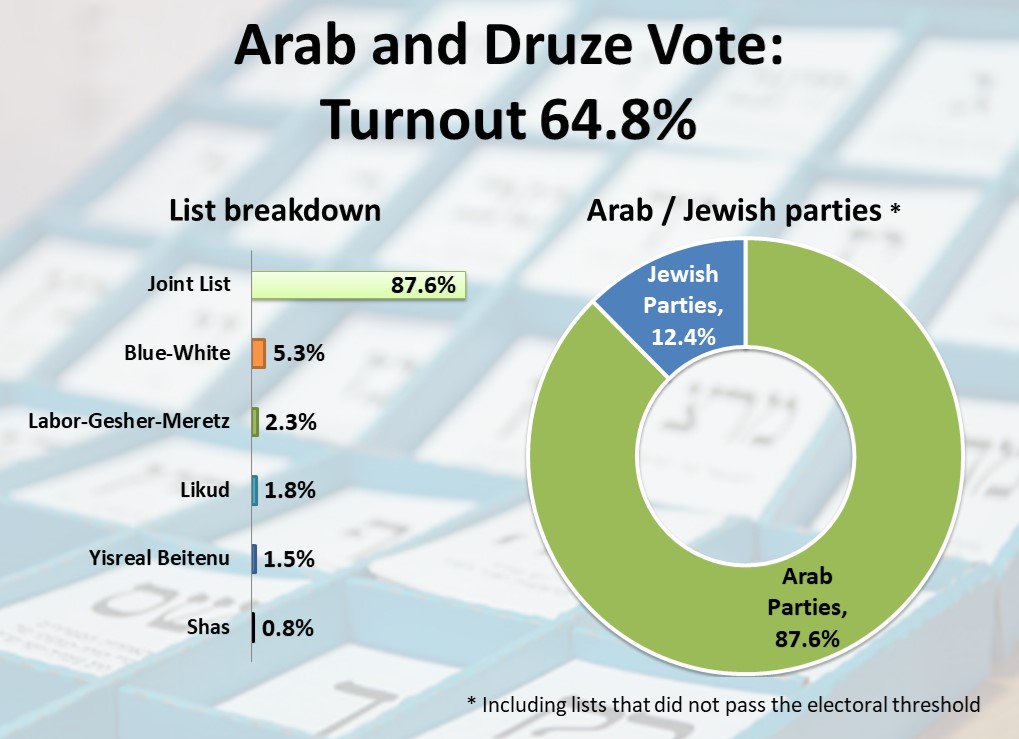 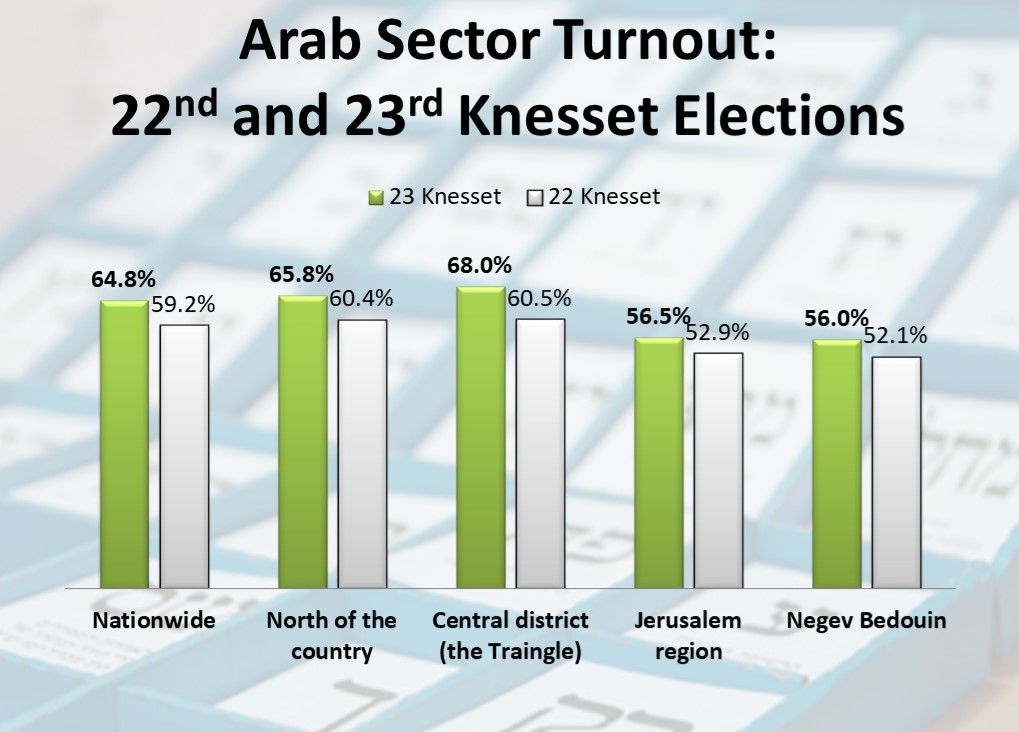 Not only was voter turnout particularly high, but support for the Joint List also rose significantly as compared with the September 2019 elections. This increase was evident across all the Arab population groups in northern Israel, including Bedouin, Christians, and even Druze. 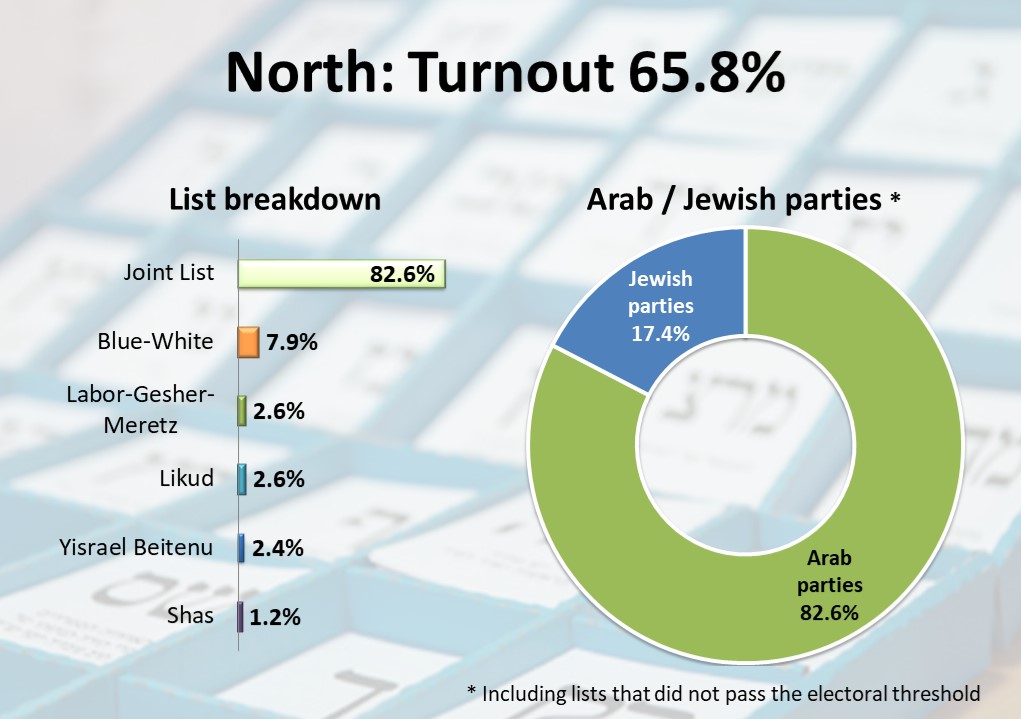 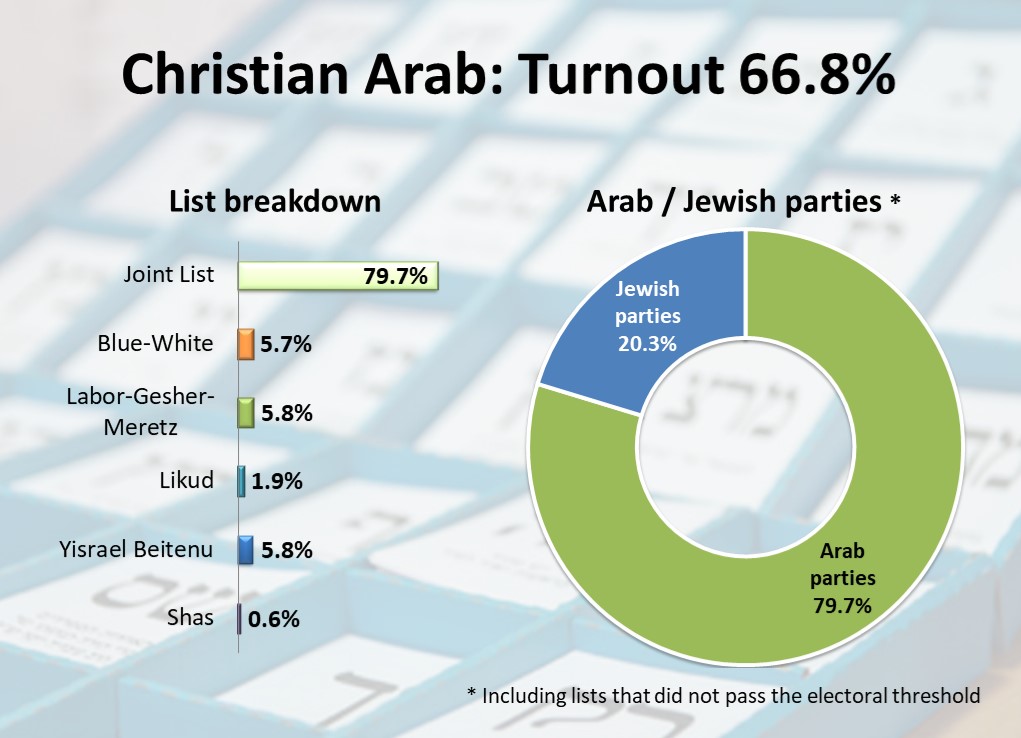 However, it is striking that the support among Druze voters for the Joint List in these elections (21.1%) was almost double than in the April 2019 elections (11.4%). The stable level of voter turnout among the Druze electorate in the last three elections, alongside the increase in votes for the Arab parties represented by the Joint List, indicates a rise in support for Arab parties among Druze voters, at the expense of their traditional support for Jewish parties.

The question of how residents of the Triangle region would vote attracted a fair amount of attention in the lead-up to the elections. This was due to the possible impact on voter turnout with regard to the “deal of the century” plan, announced some six weeks before the election, and specifically-- in light of the plan’s controversial proposal to consider the annexation of some towns and cities in the Triangle to a future Palestinian state. The Arab response to the “deal of the century” was unequivocal: voter turnout in the Triangle region was particularly high. 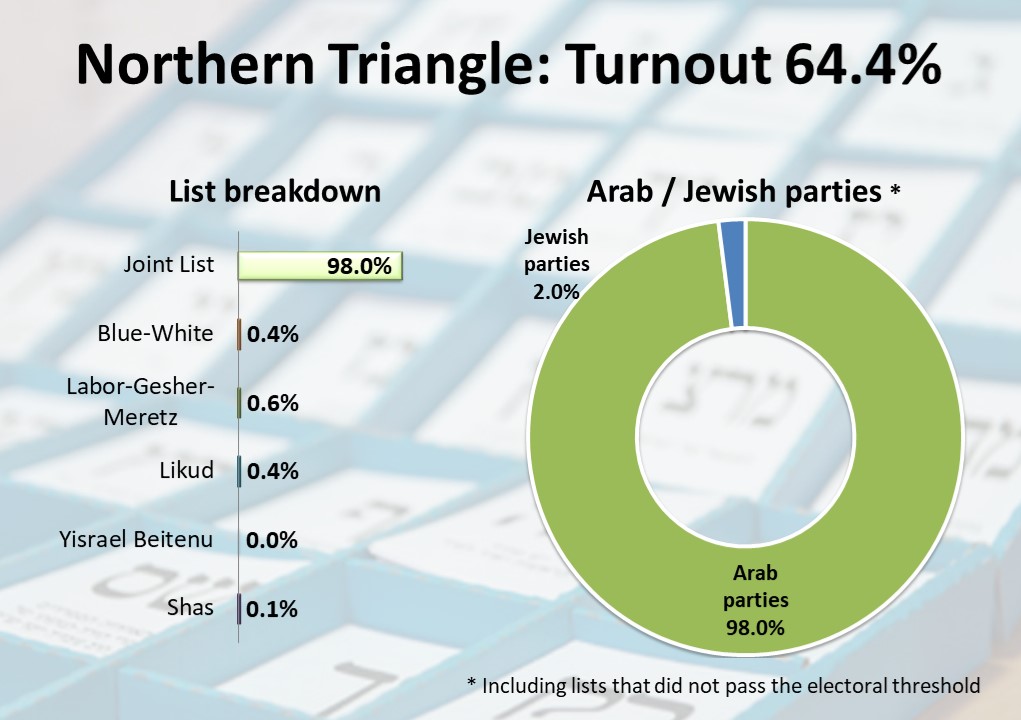 The data on Arab turnout in the Jerusalem area refers to three small villages located in the Jerusalem corridor, with some 7,000 voters. The biggest and most well-known is Abu Ghosh (about 4,800 voters). The turnout in these three villages in the last election (56.5%) was only slightly higher than in the September 2019 election 52.9%). However, there is a noticeable increase in support for the Joint List in the last election (82.1%) compared to the support it garnered in September (72.8%).

The Jewish parties have been in turmoil: the Likud has doubled its strength compared to the previous elections in September (from 3.8% to 7.8%), while Blue and White lost more than half of its strength (from 12.2% to 5.6%).

Bedouin in the Negev 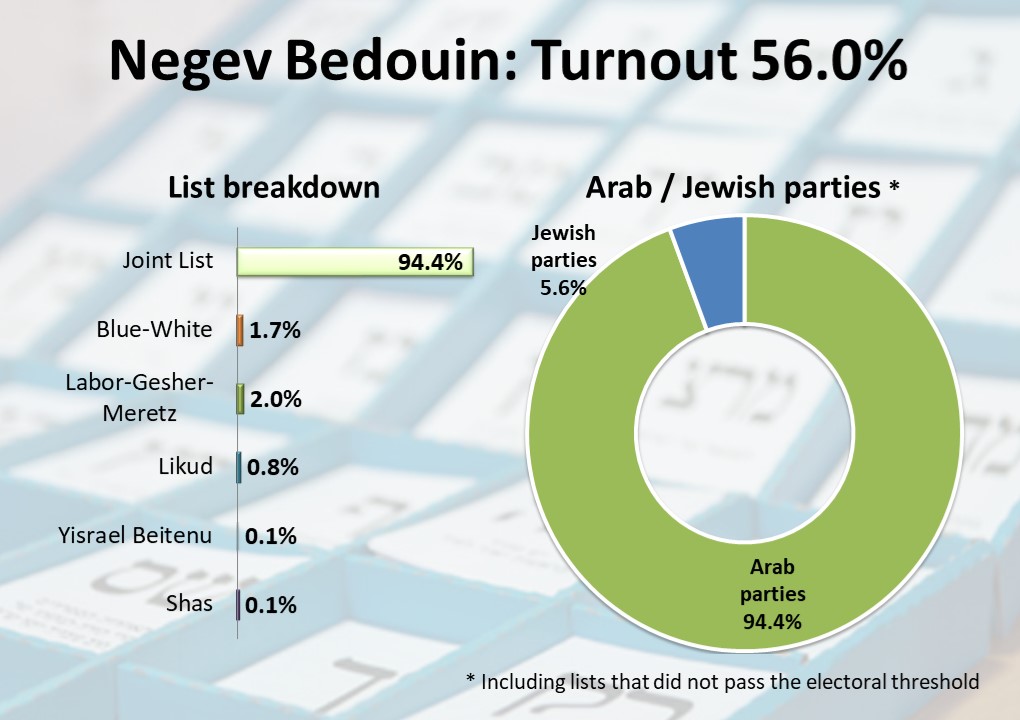 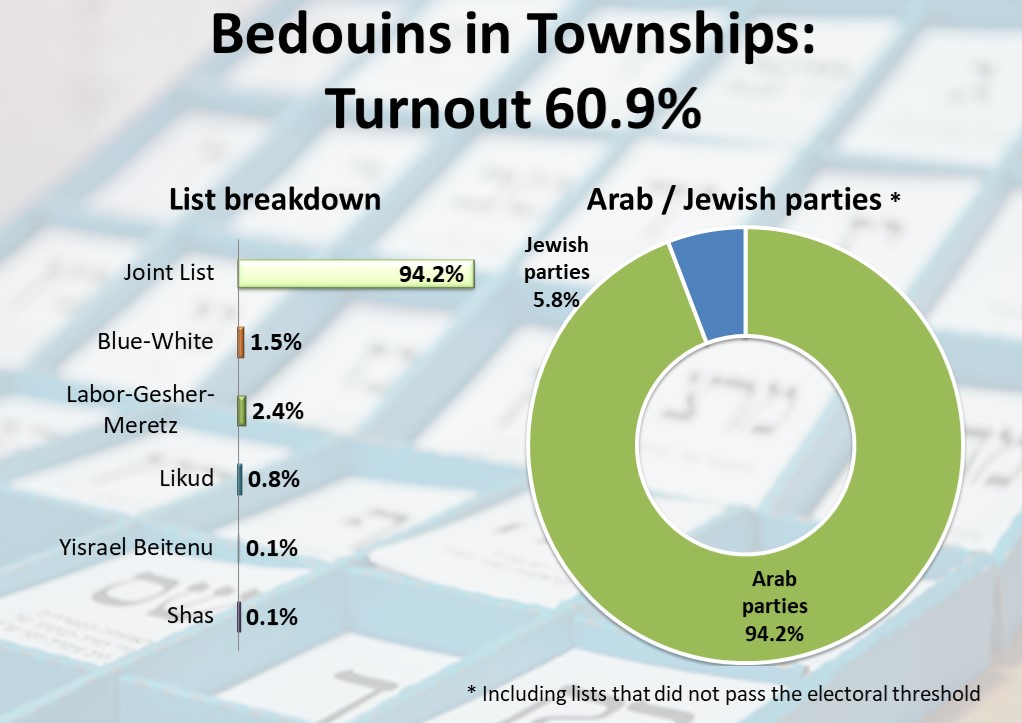 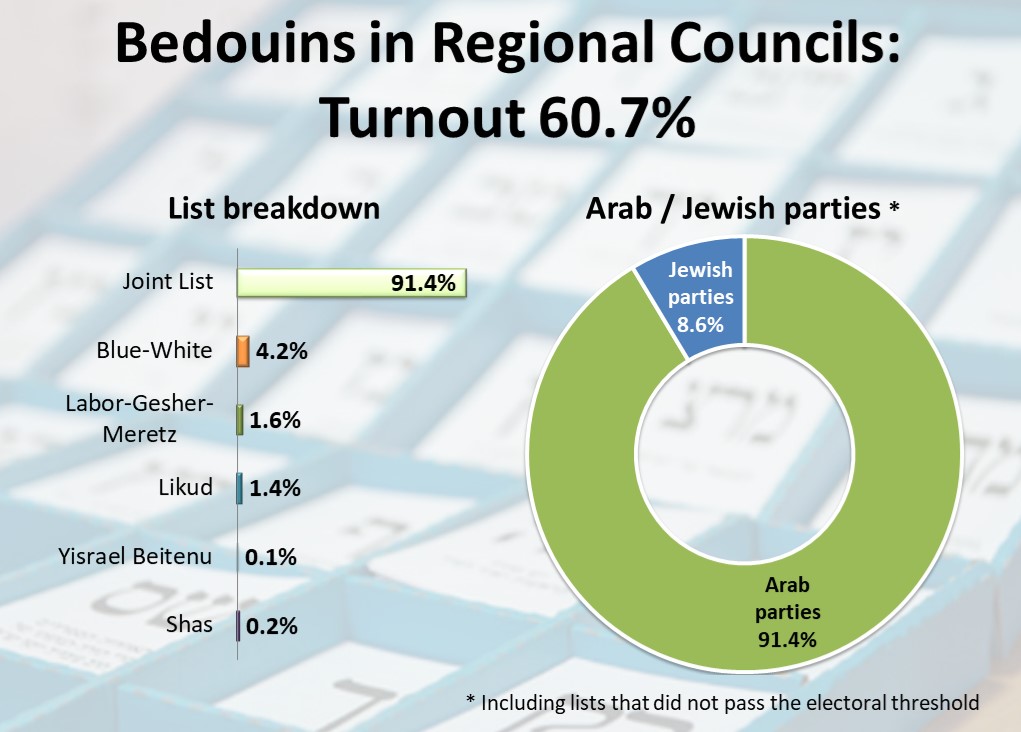 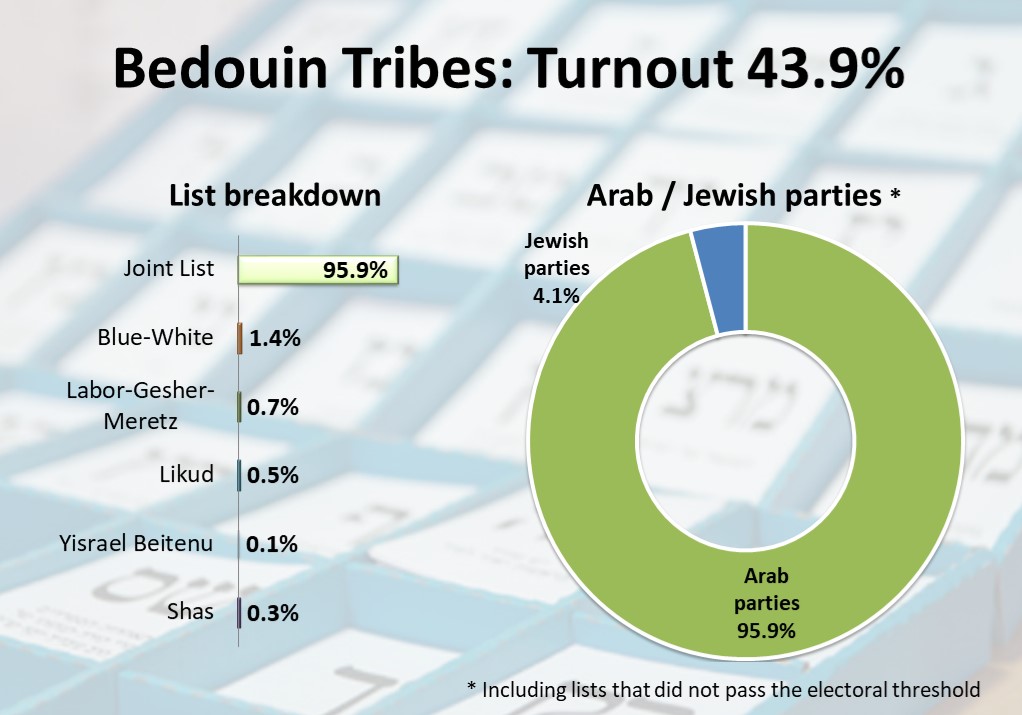 Voting patterns among Arab residents of mixed cities were analyzed based on a sample of voting stations meeting both of two conditions:

(2) Noticeably higher than the percentage of Arab residents in the city’s population. 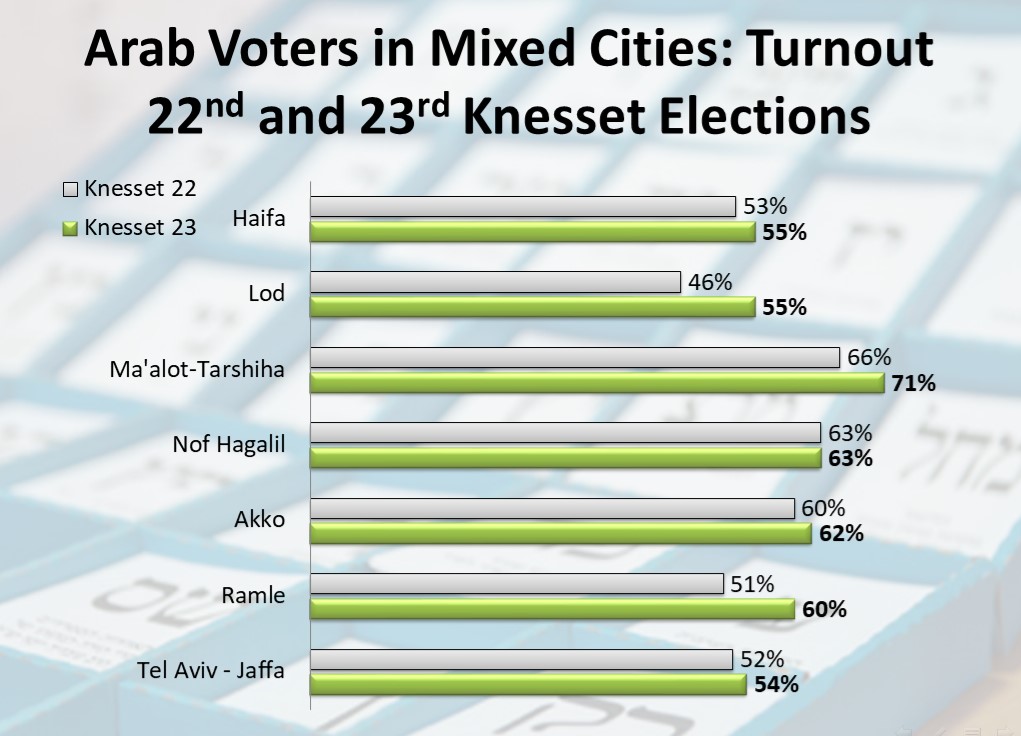 The massive vote for the Joint List in Arab localities came at the expense of the vote for Jewish parties in these localities. Support for Jewish parties dropped to an all-time low. The party receiving the greatest support was Blue and White. However, unlike the September elections, when the number of Arabs casting their vote to Blue and White, was large enough to win Blue and White one Knesset seat, this time – the Arab support came in at less than one seat. The Labor-Gesher-Meretz ticket lost half of its support relative to the combined number of votes gained by its component parties in the previous elections. The only party to somewhat increase its support from Arab voters was the Likud, while Yisrael Beytenu and Shas suffered a slight decline.

However, unlike the September elections, when the number of Arabs casting their vote to Blue and White, was large enough to win Blue and White one Knesset seat, this time - the Arab support came in at less than one seat 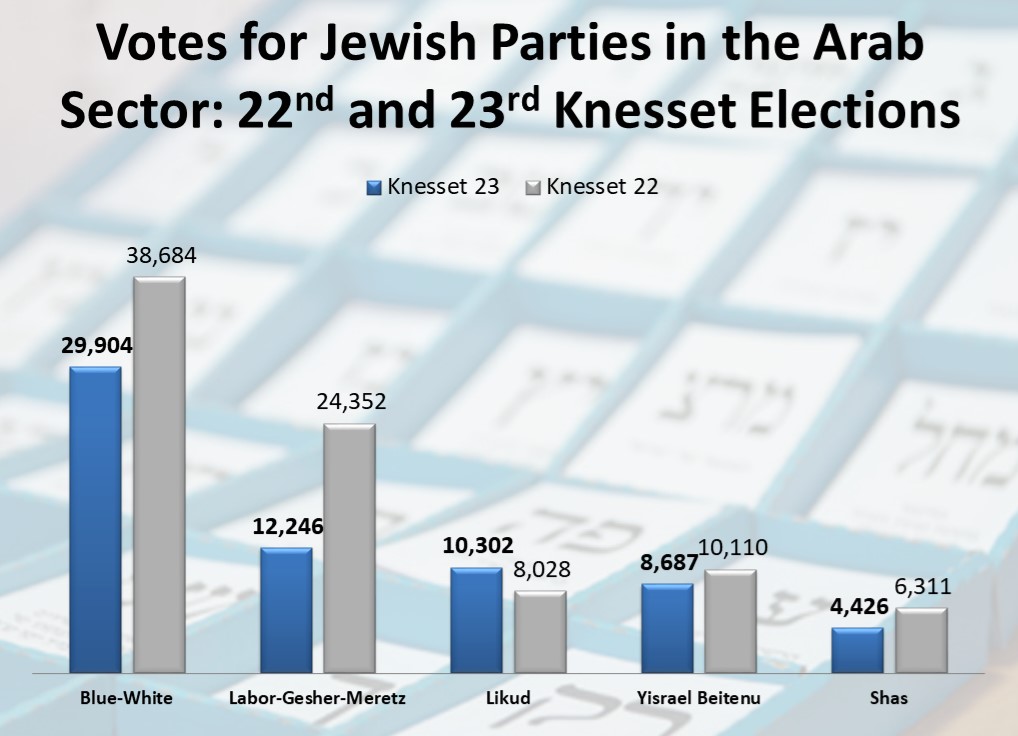 At the same time, it should be noted that in the recent elections, the percentage of “wasted” Arab votes—that is, votes for candidate lists that did not pass the electoral threshold—was the lowest on record, at just 0.5% (compared with 1.5% in 2015, 2.6% in April 2019, and 1.6% in September 2019). Contributing to this result was the fact that there were no other Arab lists on the ballot, apart from the Joint List. Thus, the main decision facing Arab voters in these elections was not which party to vote for, but simply whether or not to vote. Having decided to go to the ballot box, almost all Arab voters chose to vote for the Joint List.

Only three non-Jewish candidates from Jewish parties were elected to the Knesset , all of them Druze: Fateen Mulla (Likud), Gadeer Kamal-Mreeh (Blue and White), and Hamad Amar (Yisrael Beytenu). In total, 17 Arab and Druze Knesset members were elected, more than in any previous election.

The people had their say in these elections. A majority of the Arab public (65%) turned out to the polling stations to give a resounding vote of confidence to the Joint List. There have been three elections held in the last year, and naturally, public attention has been drawn away from the regular functioning of Knesset members in Israel’s parliament, and toward the election campaign and politicians’ wooing of voters. The Arab members of Knesset cannot rest too long on their laurels: the size of their accomplishment is matched by the extent of their constituents’ expectations. They must prove to the Arab public that the trust it placed in them, is justified. Achieving direct impact on government policy so as to address the burning issues on the Arab public agenda in Israel (violence, crime, employment, and housing and construction)—and in particular, enhancing the legitimacy of Arab citizens in Israeli public discourse—will serve to fortify the trust of the Arab public in the Knesset.