The Israeli Voice Index for April 2020, found that 52% of Jewish Israelis support Prime Minister Benjamin Netanyahu's stated policy of extending Israeli sovereignty in the West Bank, however only 32% believes Israel will move forward with this in the coming year. 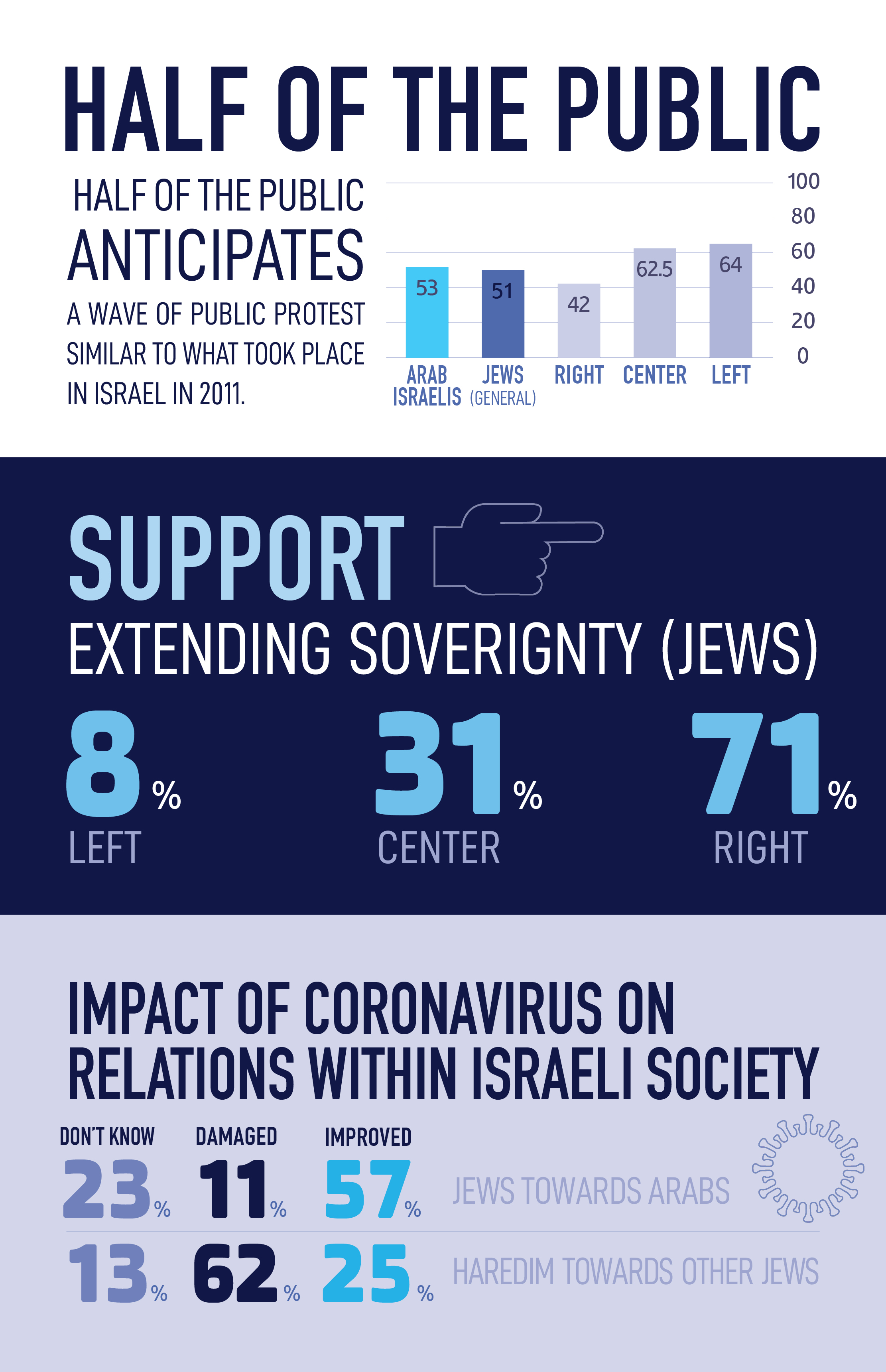 * Slightly more than half of the public anticipates a wave of public protest of the kind that arose in Israel in 2011.

* Between a government of the kind that is taking shape and a fourth round of elections, a majority of the public currently prefers the first possibility.

* A little more than half of the entire public, but a clear majority of the Jewish public, supports applying Israeli sovereignty to parts of the territories. However, only a minority believes Israel will take such a step in the coming year.

* The public is divided on the question of what status to give the Palestinians who live in the territories to which Israel will apply its sovereignty. However, the highest rate – about a third –considers that they should not be given more rights than they have at present.

Apparently because of the security calm, and perhaps also because of the fact that the public’s attention and all the prime minister’s speeches have been directed at dealing with the coronavirus crisis and not at the security issue, this month saw a considerable increase (14%) in the rate of optimists about the future of Israel’s national security. At the same time, the large disparity between Jews and Arabs remained: the rate of optimists in the former group climbed to 75% while among the latter group it stands at only 43%. A segmentation of the Jewish sample by political camp reveals a majority of optimists on the security issue in all the camps, but the size of this majority varies: left – 53%, center – 69%, right –82%.

Because, along with the health crisis, Israel has also recently undergone a political crisis, it is not surprising that the rate of optimists about its democratic future is lower than concerning its security future, though here too this month saw an increase compared to March (11.5%). The rate of optimists on this issue in the entire public comes to 45.5% (Jews – 49%, Arabs – 26%). The gaps on this issue between the political camps (Jews) are huge: left – 7%, center – 34%, right – 64.5%.

Relations between Israel’s Social Groups amid the Crisis

Much is being said about the potential for change in Israeli society’s intergroup relationships under the pressure of the coronavirus events; have they improved or been damaged? As the next diagram shows, the entire public estimates that the relations between Jews and Arabs and also between the police and the public have improved, while the relations between Haredim and non-Haredim and between the public and the government have been damaged in this period.

The relationship between Jews and Arabs: Although a majority (57%) of the entire public says the relationship between Jews and Arabs has improved, a segmentation by nationality shows that the Arab interviewees thought so at a higher rate than the Jews – 65% vs. 57%. Furthermore, a high rate – about a third – of the Arab respondents said they did not know what has happened to these relations during the period in question. On this issue we found almost no differences between the three political camps (Jews).

The relationship between the public and the police: As noted, the prevailing assessment is that in the coronavirus period an improvement has occurred in police-public relations (51%). Among the Jews 52.5% think so, and among the Arabs 45%. A segmentation by political camp (Jews) reveals that on the left only 37% see an improvement compared to 56.5% in the center and 54% on the right.

The relationship between the public and the government: Despite the perception of an improvement in police-public relations, the most common assessment is that the relations between the government and the public have been damaged (60%). The rate of Jews who believe these relations have been damaged exceeds the rate of Arabs who see it that way (52.5% compared to 45%). The explanation for the disparity could be that the Arab public’s view of the relations with the government was worse from the start, and hence this public perceived a little less damage. A segmentation by political camp (Jews) reveals that on the left the rate who see damage in the relations with the government is highest (87%); the center has the same perception but at a lower rate (64%); while on the right about half think such damage has been caused (50.5%).

The relationship between Haredim and non-Haredim: When it comes to the relationship between Haredim and non-Haredim, only a minority, as mentioned, thinks that in the coronavirus period these relations have improved, while the majority considers that they have been damaged (improved – 25%, damaged – 62%). Interestingly, the Haredim assessed at a lower rate than all the other religious groups (Jews) that the relations between them and Israelis in general had improved in the coronavirus period (Haredim – 17%, religious – 29%, religious traditional – 32%, nonreligious traditional – 40%, secular – 21%). A segmentation by political camps (Jews) showed that in all the camps only a minority sees an improvement in the relations, but it is smallest on the left (17%) and larger in the center and on the right (respectively 29% and 28%).

In your opinion, how has Israel’s coronavirus crisis affected each of the following relationships? (%, entire public)

The Chances of a Large-Scale Social Protest

We asked: “What, in your opinion, are the chances that a wave of public protest against the government will soon begin similar to the social protest in the summer of 2011?” The prevailing opinion (51%) is that such a wave of social protest is likely (38% do not anticipate such a development). On this issue the Jewish and Arab publics make similar assessments. There are, however, large gaps between the expectations of the different political camps (Jews). On the left and in the center, the majority anticipates such a protest (respectively 64% and 62%); on the right only a minority, though considerable (42%), sees it as imminent.

What, in your opinion, are the chances that a wave of public protest against the government will soon begin similar to the social protest in the summer of 2011? (%)

If you had to choose between one of two possibilities: the formation of a government, which appears imminent, or a fourth round of elections in the summer, which possibility would you prefer? (%)

As the diagram below shows, a majority of the voters for all the parties (including Blue and White voters), except for Labor-Gesher-Meretz and Joint List voters, prefer the possibility of a new government of the kind that is taking shape.

If you had to choose between one of two possibilities: the formation of a government, which appears imminent, or a fourth round of elections in the summer, which possibility would you prefer? (%, by voting in the latest elections)

Applying Israeli Sovereignty to Parts of the Territories

We asked: “The coalition agreement signed between Likud and Blue and White says that after a discussion between Netanyahu and Gantz, a plan coordinated with the United States for applying sovereignty to parts of the West Bank/Judea and Samaria will be brought for the government’s and/or the Knesset’s approval. Do you support or oppose such an application of sovereignty in the near future?” Among the Jews a small majority of 52%, compared to a minority of 9% among the Arabs, supports such a step. A segmentation of the Jewish public’s responses by political turns up very large gaps: a minority on the left and in the center, but a majority on the right favors such a move:

We went on to ask: “And what, in your opinion, are the chances that Israel will indeed apply its sovereignty to parts of the West Bank/Judea and Samaria in the coming year?” Among both the Jews and the Arabs, only a minority expects this to happen (Jews – 33%, Arabs – 25%). In each of the political camps (Jews) as well, only a minority thinks it will come to pass in the coming year: left – 27%, center – 18%, right – 42%.

If Israel annexes territories in Judea and Samaria/the West Bank, what political status should it give the Palestinian residents of these territories after the annexation? (%, Jews and Arabs)

A segmentation by political camp (Jews) shows that on the left, a majority (65.5%) supports, in case of annexation, granting full citizenship to the Palestinians in the territories to be annexed. The center is divided, with the highest rate (26%) not wanting to give the Palestinians there additional rights, while the right – but at a higher rate – takes the same view (47.5%).

If Israel annexes territories in Judea and Samaria/the West Bank, what political status should it give the Palestinian residents of these territories after the annexation? (%, Jews, by political camp)

The Israeli Voice Index is a project of the Guttman Center for Public Opinion and Policy Research of the Israel Democracy Institute. In the survey, which was conducted on the internet and by telephone (supplements of groups that are not sufficiently represented on the network) from April 30 to May 3, 2020, 615 men and women were interviewed in Hebrew and 154 in Arabic, constituting a representative national sample of the entire adult population of Israel aged 18 and older. The maximum sampling error for the entire sample was 3.7%± at a confidence level of 95%. The fieldwork was done by the Midgam Institute. For the full data file see: Data Israel