The prevalence of poverty and its impact on the ultraOrthodox population’s standard of living is far greater than among the general population. Although poverty in the ultra-Orthodox community has decreased substantially since 2008, this decline has been slow, and the rate remains very high.

The percentage of Haredim below the poverty line (54%) is much higher than in the general population (22%), with almost half (49%) of ultra-Orthodox families and almost two thirds (62%) of ultra-Orthodox children living in poverty. However, it should be noted that after a decade in which the percentage of ultra-Orthodox families living below the poverty line ranged between 50% and 58 %, the poverty rate is declining.
Standard of living is closely linked to households' levels of income and expenditure. The gross monthly income of an ultra-Orthodox family averaged NIS 12,616 in 2015 — far lower than that among other Jewish households (NIS 20,807). This low income level can be attributed to the fact that the ultra-Orthodox nuclear family often depends upon a single breadwinner who is likely to spend fewer hours on the job in a lower-paid occupation.
A look at monthly expenditures shows that in 2015, on the average, ultra-Orthodox households spent NIS 13,676 per month — 15 % less than other Jewish households, even though on the average --Haredi households are larger. The gap can be attributed to ultra-Orthodox culture, whose very essence emphasizes modesty and thrift, as well as to the existence of community-based commercial centers targeted towards this population, where products can be acquired cheaply and sometimes even at no cost.

Among ultra-Orthodox households, mandatory expenditures such as income tax, National Insurance payments, and health insurance are, on average, only one-third of those among other Jewish households (1,261 NIS as compared with 3,583 NIS). 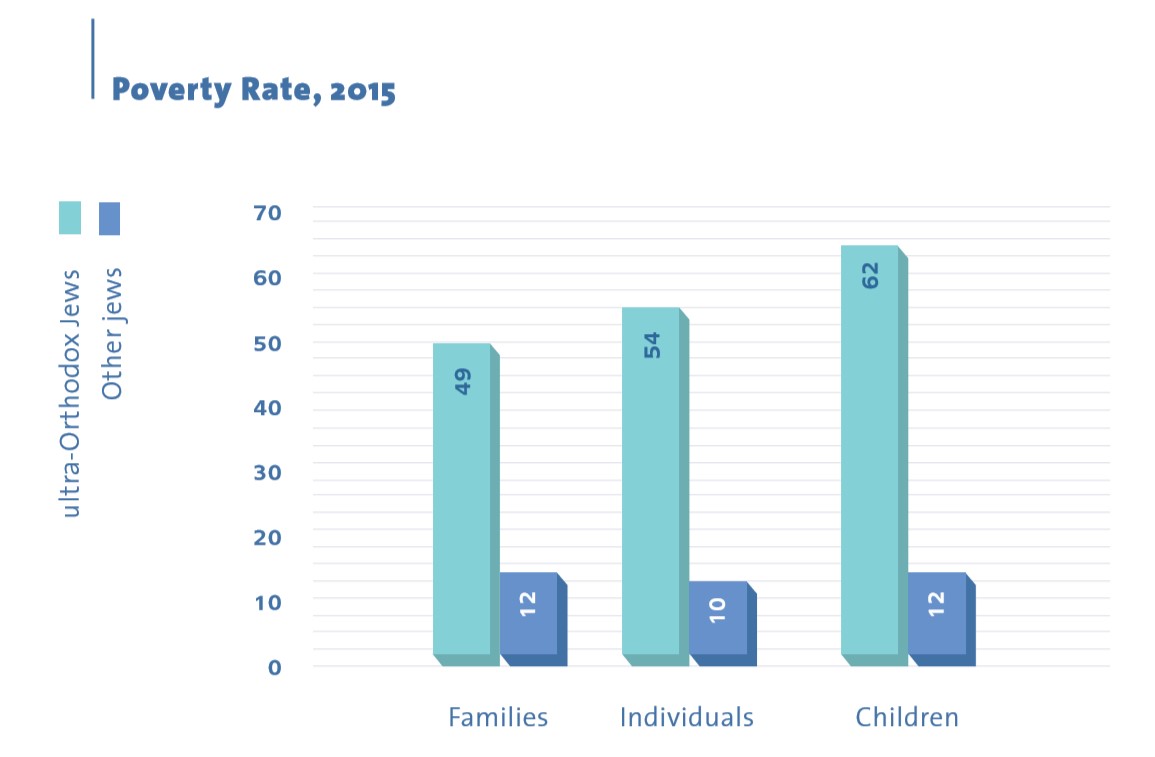 An analysis of behavior patterns related to standard of living indicates that gaps in standard of living between the ultraOrthodox and the general Jewish population remain wide; for example, gaps in car ownership (41% among Haredim as compared with 79% of the rest of the Jewish population) and in the use of public transportation for travel to work (25% as compared with 14%). The only area in which we found full parity between the two populations was in homeownership (75 % for both).