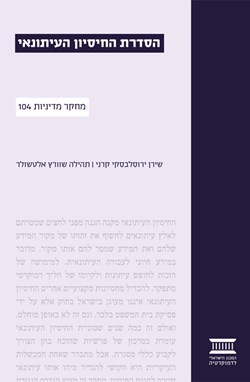 Regulating the Confidentiality of Journalistic Sources in Israel

Journalistic confidentiality is not protected under Israeli law, although it has received some protection from the courts. This policy paper provides recommendations for systematic regulation of journalistic privilege in Israel.

The reporter’s privilege (RP) protects journalists from pressure or coercion to expose the identities of their sources and disclose the information they provided. The insistence on source anonymity may well have originated in apprehension about possible damage to the source’s good name, privacy livelihood, or property, and even threats of physical harm or death. The information received from such sources is essential to journalism, a free press, and the democratic process.

In Israel, RP, unlike other types of professional confidentiality, is not guaranteed by legislation, but is mandated by court rulings alone, rendering the protection far from absolute. Over the past few years, RP has featured prominently in discussions of several public issues, such as those involving Liora Glatt-Berkowitz, Anat Kamm, Miriam Tzachi, and the blogger Eishton among others. These affairs demonstrated the necessity of systematic regulations addressing RP. Several proposals for such legislation have been advanced, but none became law.

A. Definition of which journalists are entitled to RP

One key factor undermining attempts at RP legislation is the difficulty of defining which journalists will be its beneficiaries. Legislative proposals presently being considered by the Knesset would sidestep this obstacle by leaving the decision to the discretion of Government ministers or other State authorities. We believe it would be wrong to do so, because the Executive Branch might be tempted to narrow its definition and reduce the scope of the protection provided.

Our proposed definition is derived from the objective of confidentiality maintenance of trust between source and journalist so as to facilitate gathering of information. It also addresses journalistic practice in the Internet Age, when the chief contributor to the marketplace of ideas and opinions is not the printed press, but the blogosphere and social networks, and journalists are not limited by the medium in which they function. On the other hand, the proposed definition is not so broad as to have any substantive adverse effects on the evidence and witnesses the courts require to uncover the truth in matters that come before them

The proposed definition is as follows:

A journalist is any person who engages actively or professionally in gathering information and distributing it to the public; alternatively, any member of Israel’s media professions who works in news production whether as a salaried employee or a freelancer.

For the purposes of this definition, “information” means any declaration of fact, opinion, or idea in a textual, audio, or video format.

Should people who do not contribute substantively to the dissemination of information required by the public attempt to invoke the protection provided by RP, the courts would be authorized to limit the scope of the protection that this definition accords through interpretation or legal doctrine (e.g., abuse of legal rights). On the other hand, confidentiality will also apply to those who assist journalists, as well as to journalists’ superiors, in keeping with the proposed definition.

B. Who is entitled to journalistic confidentiality

According to the conception currently prevailing in the courts and in proposed legislation, confidentiality applies to the source and not to the journalist. Consequently, it is the source who is entitled to forgo this privilege. This approach conforms with the notion of professional confidentiality, in which it is the client who is granted the privilege. At the foundation of this conception is a desire to encourage clients to convey information to professionals and receive the best possible service from them. We believe that RP demands a different logic, however, as it seeks to promote the journalists’ objective of gathering information and ensuring its free flow to the public. Consequently, RP is an institutionalized form of confidentiality rather than a professional one, based on the rationale of social benefit, rather than privacy.

We maintain that RP should be interpreted as applying to journalists. If a source refuses to reveal his/her identity and the information conveyed, but the journalist seeks to make them public, the courts may permit such disclosure. If the respective positions are reversed, however, the courts need not interpret the source’s consent as a waiver of confidentiality. Only in extraordinary cases will court rulings obligate journalists to reveal their sources and the information provided. Notwithstanding, we note that where the journalist is reticent, sources may still reveal the relevant information outside the courts if they so desire.

While our proposal empowers journalists in their interaction with their sources, we also believe that an optimal balance of the relations between them requires two types of source empowerment:

The proposal originates in our basic idea that it is appropriate to empower journalists so that they can do their job and help maintain the democratic process, while encouraging sources who are ethically motivated to provide information.

C. RP as protection from interrogation and searches

Practices that authorize the interrogation and searches of journalists, whether by law-enforcement authorities or the courts, threaten RP. If the authorities can pressure journalists, intercept their communications, or follow them, there is no need for legal procedures to rescind RP, because the authorities can obtain the information by these means in any case. In the spirit of the Maoz Commission Report and the recommendations advanced by Dr. Yisgav Nakdimon—and in response to the special threats prevailing in the Digital Age—we recommend instituting the following measures to ensure that RP applies equally to investigation and search processes:

D. Conditions for revocation of RP

The key condition for revocation of RP should be the imperative need for disclosure of the matter in question. We believe that it should be possible to revoke confidentiality only if disclosure of the information possessed by the journalist would contribute substantively to the judicial process.

We maintain that even if the four conditions of the Citrin Rule are met and information submitted by sources must be revealed, the law should mandate that the scope of disclosure be limited to what is required by the relevant public or private interest. Proportional disclosure is also stipulated in foreign legislation and recommendations, such as those issued by the Council of Europe.

In its deliberations, the court will take three additional considerations into account: whether RP is being invoked in civil or criminal proceedings whether the journalist is serving as a witness or litigant, and whether disclosure is essential for a defendant’s conviction or exoneration.

E. Abrogation of the contract between journalist and source

As a result of the Glatt-Berkowitz and Anat Kamm affairs, which are still being adjudicated, the courts will have to establish hard and fast rules regarding journalists’ obligations towards their sources. We propose allowing the imposition of contractual responsibility on journalists who violate RP subject to the following considerations:

To help sources prove the existence and terms of the agreement, we propose posting a basic version of an agreement between source and journalist on several accessible websites, such as that of the Government Press Office major newspapers and television stations, and social media. This basic agreement would include the following essential points:

We recommend that legal proceedings to revoke RP take place behind closed doors, as the Evidence Ordinance requires in cases involving professional confidentiality. We believe that legal proceedings about claims of confidentiality should be suspended pending clarification of this issue. Furthermore, even in cases in which RP was revoked and the journalist was required to testify, the courts should retain the option of hearing such testimony behind closed doors. These procedural conditions would help avoid undue harm to the interests of sources and journalists.