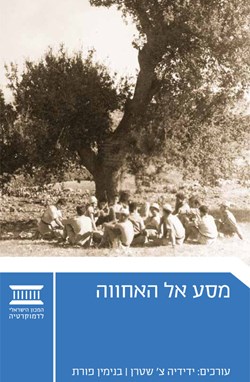 In Search of Solidarity: An Israeli Journey

An anthology that seeks to restore Israeli solidarity to the center of the Israeli public discourse and make it a significant factor that shapes our shared life. It investigates the roots of Jewish fraternity, and includes articles by scholars of law, philosophy, psychology, sociology, rabbinics, politics, education, and linguistics.

Israeli society gives the appearance of fragility, with a constant sense of life on the brink, the anxiety of teetering on the lip of the abyss. One symptom of Israeli anxiety is that Israelis turn every internal debate into an existential threat. The opponent is always labeled a rightwing fanatic or a crazy leftist, a religious zealot or the modern version of Amalek. Israel’s most implacable enemy, its greatest and most serious threat, can be found in the decline, real or imaginary, of the sense of solidarity.

This anthology seeks to restore the glory of Israeli solidarity, return it to its place at the center of the Israeli public discourse, and make it a significant factor that shapes our shared life. It does so through an investigation of the roots of Jewish fraternity, by applying a healing touch to the exposed and infected nerves of Israeli solidarity, and by conducting a self-reckoning that explores the past but also contemplates the future. The ability to draw from the wellspring of Jewish brotherhood and reconstruct that solidarity in the Israeli public space is critical for enabling Israeli society to survive and flourish.

“Solidarity” is often viewed as some sort of kitsch that tends to sweep genuine problems under the rug, cut corners, and radiate a phony sense of togetherness. It is as if “love of one’s fellow Jew” (ahavat yisrael) were a magic formula with the power to cure real problems. That is not what we have in mind. The revival of solidarity is a complex challenge. “Love for one’s fellow Jews” requires a perspective that is not simplistic and demands that we pay attention to the different, the diverse, the conflictual. Solidarity can confront key issues that are found in Israeli society. It is relevant to dilemmas related to the public economy, distributive justice, social responsibility, the nature of the education system, relations between Left and Right, legal institutions, and the Hebrew language.

What is the economic significance of Jewish brotherhood? Does it dictate philanthropy or a redistribution of wealth? Does the concept of Jewish brotherhood support Israeli solidarity or undermine it? What place is there for non-Jewish citizens of Israel in a public space that has Jewish brotherhood as its common denominator? These and other questions are addressed by the articles in this collection, which were written by scholars in a variety of disciplines: law, philosophy, psychology, sociology, rabbinics, politics, education, and linguistics.

Israeli society gives the appearance of fragility, with a constant sense of life on the brink, the anxiety of teetering on the lip of the abyss. No wonder! Since the earliest days of Zionism, the Jews of the Land of Israel, and later the citizens of the state, have faced a broad, complex, and almost impossible spectrum of existential threats and challenges: foreign and defense policy, war and peace, settlement and borders, economy and society, religion and state, Israel and Diaspora Jewry, Jews and Arabs. In the countdown to every new year, headlines warn that a decisive juncture has been reached; in every election campaign, the pundits proclaim that the fate of the state and nation hangs in the balance.

We must not make light of the objective difficulties and trials that confront Israeli society. It is hard to find their counterpart in any civilized country. Of course there is also the subjective and psychological element, which aggravates and intensifies challenges that are already complex. In Israel, many internal debates are blown up into existential threats. One’s opponent is labeled a right-wing fanatic or a moonstruck leftist, a religious zealot or the modern version of Amalek. A bill submitted by the Right or a public halakhic ruling will frequently be denounced as the death-knell of democracy; a ruling by the High Court of Justice or program of the Left will be suspected as presaging the end of Zionism. Every side is certain that those on the other side, and the other side alone, are behaving like hooligans who, during the siege of the city, set the granaries on fire and bring the Third Temple crashing down on everyone’s head. The Other—political, religious, social, national—has become Hell. There is good reason that when Israelis long for the good old Land of Israel they yearn for Haim Gouri and Sasha Argov’s plaintive ballad in memory of the fallen of the War of Independence, “Friendship.”

Any attempt to enumerate the social fissures ripping Israeli society to shreds will leave us baffled: the tension among the Haredi, the religious, and the secular that remains unhealed; the ever-growing economic disparities; the deep abyss separating Right and Left; the ethnic genie that still emerges from the bottle from time to time; the walls that divide recent immigrants from the long-settled and native-born; the knotty and charged fabric of relations between Jews and non-Jews, and especially between Jews and Arabs.

It is only in rare moments of grace, when the fierce debates that rage in the public arena yield to the common denominator, that the faith in the wondrous Israeli ability to cope with colossal challenges is vindicated. But in the daily routine, where the sense of fraternity seems to have been lost and fellowship is in retreat, the existential challenges mount higher and seem to constitute an impassable barrier. Israel’s most implacable enemy, its greatest and most serious threat, lies in our inability to reach a consensus, in the decline, real or imaginary, of solidarity.

Israel is the nation-state of the Jewish people. Does its cultural, national, and religious distinctiveness harbor a true potential for recovering the lost splendor of solidarity? The articles in the present collection examine the possibility of restoring solidarity to the center of the Israeli public discourse and making it a significant factor in shaping our shared life, inter alia, through an investigation of the roots of Jewish solidarity, a healing touch applied to the exposed and infected nerves of Israeli solidarity, a sharp reckoning that looks towards the past but also contemplates the future. Martin Buber is supposed to have said that, in the wake of the Great War, freedom moved west, equality traveled east, and everyone forgot about fraternity (Muki Tzur, in this volume). The time is ripe and the need acute for a new and timely reconstruction of the moments of solidarity that accompanied us in the past, for a public soul-searching about the place of fraternity in our shared life. We believe that the ability to draw from the wellspring of Jewish solidarity and reconstruct that fraternity in the Israeli public space is a critical key for our society’s ability to survive and flourish.

“Solidarity” is liable to sound—and frequently for good reason—like sentimental pap, rustling in a cheap cellophane wrapper, sickeningly sweet. The solidarity discourse tends to sweep genuine problems under the rug, cut corners, and radiate a phony sense of togetherness. This is the kitsch of love for one’s fellow Jews (ahavat yisrael), an involuntary evening of a reluctant public songfest. That is not what we have in mind. “Love for one’s fellow Jews” is not an instant formula for solving the problems of Israeli society; fraternity is not a magic spell. Reviving solidarity is a complex challenge. It requires a perspective that is not simplistic and demands that we pay attention to the different, the diverse, the competitor. Indeed, “love for one’s fellow Jews ... is not just a matter of emotions; it is also an important field rooted in the Torah, a multifaceted science that is broad and deep” (Rabbi A. I. Kook, Orot [5745 (1985)], “Orot Yisrael” 4.1).

Solidarity is a privilege that exacts a price. It does not offer only benefits, a comfortable and well-padded life, but also demands, first and foremost, major sacrifices, while calling for concessions that are not obvious. To forge solidarity in Israel, the warring parties and rival poles must give up their stubborn insistence on realizing some of their dreams in order to achieve broad public agreement about realizing the rest of them.

This kind of solidarity has the power to face up to key issues that resound in Israeli society and to encourage new and out-of-the-box thinking. It is relevant for dilemmas related to the public economy, distributive justice, and social responsibility, of course, though it does not necessarily lead to foregone conclusions. It may turn out to be no less relevant for other domains, such as the character of the education system, relations between Left and Right, legal institutions, and the Hebrew language.

We also need to think about the tension between Jewish brother-hood and Israeli solidarity. Are they really the same thing? Can the language of biblical fraternity cast light on the contemporary Israeli argot and its use of “my brother” and “my sister” as general terms of address? What is the connection between “brotherhood,” which summons up the intimate bond among siblings, and “solidarity,” which may make us think of the close relations among soldiers in the trenches? On the socioeconomic plane, does Jewish brotherhood lead to right-wing philanthropy or left-wing distributive justice?
Where will non-Jewish citizens of Israel be placed vis-à-vis Jewish brotherhood, which tends to erect barriers against the outsider? These are only a few of the difficult questions that lie at the very core of the issue of solidarity; they are addressed in various ways throughout this volume.

The essays that follow were written by outstanding figures in their respective fields. We have sought to offer the broadest possible panorama on our topic. Accordingly, the articles are rich and diverse, both with respect to their authors’ affiliation and with regard to their outlook. Solidarity is scrutinized from legal and linguistic, historical and social vantage points; in educational, media-related, and military contexts; and with reference to the public discourse in Israel. Some authors are searching for the solidarity that has vanished, while others warn against the vain charms with which it seduces its lovers.

We could not realistically include articles from every field we would have liked to consider and from every relevant point of view. But, in the words of Rabbi Tarfon in the Ethics of the Father, it is not our job to finish the task—yet we have done our utmost not to desist from it, either.

The book is divided into three sections: “Solidarity—Essential
Foundations”: essays about the fundamentals of Jewish and Israeli identity as viewed from the perspective of solidarity; “The Solidarity Discourse”: critical examinations of the public dialogue in Israel today; and “The Practice of Solidarity”: a range of proposals for action plans based on the ideas of solidarity. It goes without saying that this threefold division was imposed only to create a framework for the material. Obviously, the texts are more complex and could be classified in many different ways.