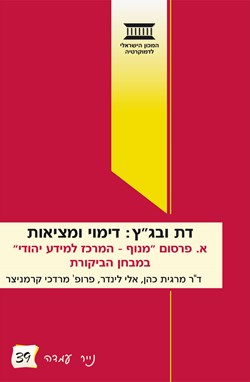 Religion and the High Court of Justice (Part 1)

This position paper is the first in a series of publications examining the role of the Supreme Court in Israel's legal and public spheres. This paper offers a survey of Israeli High Court of Justice rulings on matters of religion and state, in light of public criticism of the Court's over-involvement in deciding issues of political significance.

This position paper is the first in a series of publications examining the role of the Supreme Court in Israel's legal and public spheres. Critics of the Court's output, especially when sitting as High Court of Justice, argue that it has escalated its degree of activism and intensified its involvement in decision-making at the political level. The authors of the series aim to provide a comprehensive framework for examining these arguments and for clarifying the Supreme Court's proper role in Israel's public arena. Within this framework, the authors critically examine several assumptions on the Court's output, common to both supporters and opponents of its actions. The series of publications will examine these issues on both the theoretical and empirical-quantitative levels.

This paper forcuses on a short publication by 'Manof: The Center for Jewish Information', which identifies itself with the ultra-orthodox sector, and purports to analyze the judiciary's role in issues of religion and state. The publication seeks to prove, through a database of rulings, that since the 1990s there has been a "sharp rise in the number of anti-Jewish and anti-religious rulings", claiming that it has risen in recent years up to 100 percent. The number of errors in the publication and the level of their severity, as well as the manner in which the argument regarding the Supreme Court justices' background is made, justify a more comprehensive examination of the report and a presentation of its actual value. Such correction is important for the maintenance of a continuing discussion on religion and state, based on accurate data.

Manof's report has two sections. The first is a quantitative study of 160 decisions, and supplies statistical conclusions about the nature of judicial output in this field. As stated… a first error that reveals the quality of the research.

An examination of the publication reveals several fundamental faults.

A. Manof's Database of High Court of Justice's Decisions on 'Religion and State'

B. On the Composition of the Supreme Court

As for "finding a strong correlation between personal judicial attitudes and decisions on religious issues": in the summary, 'Manof's researchers simply state the following: "since the personal attitudes of the justices on this subject are known, it is easy to discern the personal attitudes and identified lifestyle vis-a-vis the judicial decisions." In addition, the authors offer a table that supplies some personal information about residing justices, intending to prove insufficient representation of 'religious' communities. A considerable number of the aforesaid arguments receive no substantiation in this two-page part of the publication. Moreover, the publication does not grapple at all with the serious issues involved. It does not discuss methods of identifying different social groups, nor does it rely on theories of the judiciary. In fact, only two criteria seem to be relevant: a person's religiousness/ secularity and his ethnic origin. Even these two criteria are not well developed, as the authors ignore the multiple social structure of Israeli society (for example, mixed ethnic origins and new immigrants). It is unfitting to assess a person's suitability for a position solely on the basis of these two criteria, while ignoring requirements of education and expertise. In any case, the writers' exaggerated determinations have no basis in reality.

The representation issue is not a simple one. However, it would seem that this isnot the issue that disturbs the authors. Had the Supreme Court justice to come from among their social group, or, alternatively, had the Court fully supported the authors' views, it is safe to assume that no objection would have been raised. This part of the publication, besides being rife with blatant factual errors, is deficient in oversimplifying the issue and presenting it in crude lines that ignore the richness and complexity of Israeli social reality, especially in light of the aspiration to maintain a strictly professional court.

In conclusion, the publication analyzed in this position paper was shown to possess significan deficiencies, which render it an unreliable source for further discussion of the important issue it approaches. We chose to deal with it, despite its errors, since it is currently being used in the public debate. Genuine dialogue between sectors can exist only on the basis of a correct reading of the facts, and we hope that further analyses will proceed in this fashion.