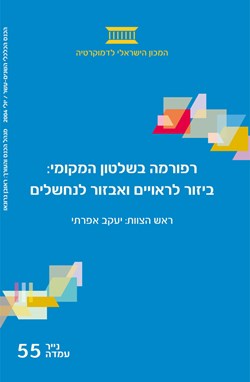 Decentralizing the Deserving and Equipping the Disadvantage

Examination of Israel’s local governance as a whole reveals severe administrative and budgetary problems. Does the reform created within it actually widen the gap that exists between strong and weak authorities, instead of narrowing it? This paper analyses changes that were made in the system of local governance in the aftermath of the economic and security crisis of the early 2000’s.

Among Israel's local authorities one witnesses a great variation in the quality of budgetary management and service provision. In general, changes in the legal and budgetary environment in which the local authorities have operated since the mid-1990s have brought about a situation in which the authorities’ bank debt has remained stable, while its size relative to the authorities’ income, GDP and population has decreased, despite the fact that aggregate grants from the Israeli central government to the authorities have not grown in proportion to these variables. Thus, from the end of 1997 to the end of 2003 the local authorities’ overall debt (including overdrafts) remained almost unchanged, and relative to population size, income and expenses, actually decreased. Of the local authorities, about 160 decreased their per-capita debt during this period at fixed prices, while about 100 increased this debt. As a result, a significant level of operative stability was achieved by the local authorities until the crisis of 2003-2004. This crisis to a large degree reflected the dramatic changes made in the size of governmental budgetary transfers. Examination of Israel's local governance as a whole, however, reveals severe administrative and budgetary problems in many local authorities, although the media tends to exaggerate these problems at the expense of the sound management practice that prevails in many of them.

The changes that took place in local authority budgeting during 2003 and 2004, including the attempt to introduce an additional drastic cut in the aggregate grant for 2004, did not take into consideration the differences that exist among the authorities. General programs, which are not based on detailed familiarity with the local authorities affected, are always problematic. This kind of approach impaired implementation of the local authority unification plan (the unification that did take place was unprecedented), and resulted in the shelving of most of the additional cuts planned for the 2004 local authority budgets, and created the potential for long-term damage to budgetary management. There was also an obvious asymmetry in the economic recovery plan: the wage cuts and property tax increases mainly aided one group of local authorities, while the grant reduction injured another group of authorities. These ill-considered and hasty attempts to institute comprehensive reforms without taking into consideration the differences between the various authorities caused great instability in the authorities’ financial management. The struggle that ensued in the wake of these reform efforts undermined basic norms of governance in many local authorities.

Efforts to address budgetary issues in a comprehensive manner reflect a more profound problem. On the one hand, the multiplicity of local authorities in Israel occasions frequent governmental involvement in their administration and supervision. On the other hand, the government does not have the capability to effectively monitor what goes on in the authorities. Moreover, the attempt to exert control over such a large number of local authorities requires the adoption of a uniform policy toward the authorities, with no distinction based on the quality of their administration, size, and external influences –distinctions that would ease the burden of oversight borne by the central government.

The current crisis in local governance may lead to developments in a number of directions: (1) deterioration of local governments, characterized by erosion of services at the municipal level, with residents, particularly those with the means to do so, paying for more and more services privately while the weaker populations make do with inferior services; (2) greater involvement of the central government in the provision of local services, whether directly or through privatization which “bypasses” local governments – a situation in which the central government has great influence on control and on setting the ground rules with regard to local services provided by external contractors; or (3) greater efficiency and improvement of local government services, whether through streamlining the existing system or through a process in which local governments become less involved in the direct provision of services and more involved in “navigation” and control of services provided by contractors and private companies hired via concessions. Since the first of these developments is undesirable from both a social and an economic point of view, and since experience elsewhere in the world points to the probable creation of forces that would seek to expand the role of local government in the provision of public services in Israel, it is important that tools be developed to make it more efficient, while strengthening the relationship between the will of residents of various localities and the composition of the “package” of services and payments provided to them. Due to the complexity of the problems to be addressed, it is highly expedient that solutions be developed based on a long-term perspective and with clear goals in mind; nevertheless, these changes must introduced carefully and gradually.

Principles of the proposed change in the relationship between the central and the local governments are as follows: