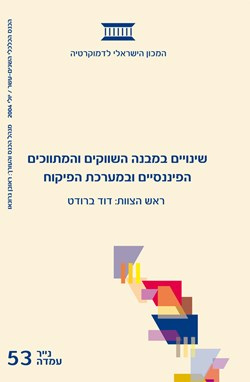 A proposal for resolving the problem of concentrated ownership and conflicts of interests in Israel’s financial markets in order to encourage the creation of financial intermediaries outside the banks that can compete with the traditional banking system and improve the quality of the consumer products.

A proposal for resolving the problem of concentrated ownership and conflicts of interests in Israel's financial markets in order to encourage the creation of financial intermediaries outside the banks that can compete with the traditional banking system and improve the quality of the consumer products. The proposal was prepared by a research team headed by Mr. David Brodet for the Caesarea Economic Policy Planning Forum. The topic was chosen as an area of focus for the Forum together with MK Avraham Hirschson, Chairman of the Knesset Finance Committee, in order to help him and his committee assemble a strategic legislation plan.

A. The Market Structure and Financial Mediation Suitable for the Israeli Economy

The team discussed the functions of ownership,  asset management,  marketing and consultancy , as well as the underwriting activities of the financial mediators. The main objectives in these areas are to increase competition within the sphere of financial mediation –especially vis-à-vis households – and to minimize the potential for abuse arising from conflicts of interest. The way to attain these goals is to build a capital market of well-developed extra-banking financial brokers having a large volume of activities alongside the banking system,  wherein all mediators compete among themselves in all areas of the capital market.

The proposed solutions are based on the recognition that every financial mediator involved in a number of activities has a potential conflict of interests. Thus, whatever structure is suggested for the capital market, it will not completely eliminate the potential for conflicts of interest, but increasing the number of players in every area of activity could help diminish the ability and motivation to exploit such conflicts of interest.

The team’s recommendations in these areas were formulated in an attempt to cope with complex dilemmas in the area of proprietary rights, stability of the financial system and applicability in the present reality of the Israeli economy.

Ownership and asset management – there are two different positions with respect to the required solutions:

Position A: Separation between ownership and management of assets (provident funds, mutual funds and educational funds) presently held by the various financial mediators. Every financial body holding these assets will administer them through a separate corporation and will be obliged to choose between the continued holding of majority ownership (80%) and relinquishing most of the funds’ administration and transferring responsibility for ownership while administering the funds’ assets.

Position B: Conversion of companies administering provident funds and mutual funds into public companies, and obligating the banks and insurance companies to remove themselves from at least 80% ownership of provident funds and education funds and 60% ownership of trust funds. Moreover, their ability to administer the assets of the funds will be limited to a maximum of 20%, with the rest being transferred to external investment management.

The team’s recommendations (according to the two positions) offer a gradual plan for applying the proposed reform, which will first be directed to the large banks with assets amounting to more than NIS 8 billion in each of the instruments, and then to financial bodies with smaller assets.

Insurance companies will be entitled to hold bank stocks up to no more than 5% and without a controlling interest, according to the criteria established by the inspector of banks.

All financial mediators will be entitled to market all financial products, including insurance policies, provident funds, trust funds and pension funds. Every financial mediator is obliged to carry out every buy and sell order given by a client, regardless of the ownership of the product that the client wishes to buy or sell.

The present consultancy law creates a potential for conflict between the legal environment and the business logic of the consultant employed by banks and other financial mediators. Existing legislation, which does not allow parties whose products are marketed by the bank to receive any fee, creates interest to mainly sell in-house products. When additional financial bodies become involved in the ownership and administration of funds, the problem of lack of objectivity in consultancy will be significantly curtailed as the distinction between “home” and “external” products will blurred.

The team recommends that the consultancy law be changed so that the banks will be able to formulate a package that includes a limited number of products recommended by their investment consultants, after publishing clear criteria for establishing which products are to be included. The products package will have to meet minimum conditions of scope and variety as determined by the regulator. The amended law will maintain professional and objective consultancy.

The team recommends that banks be prohibited from underwriting companies in which they have an interest as owners or as credit-givers. When the greater part of ownership and asset management is taken away from the banks, the potential for a conflict of interest between underwriting and other areas of activity will decline.

B. Structure of the Regulatory and Control System over the Financial Institutions and Markets

The team recommends setting up a single regulatory authority for all financial institutions and markets in Israel. This authority will replace the three independent regulatory bodies presently operating: the Supervisor of Banks, Israel Commissioner of Insurance and the Israel Securities Authority. The need for such a network mainly arises from the increasing overlap between the activities of various financial mediators (banks, insurance companies, private mediators, etc.), which under the present regulatory structure sometimes leads to lack of consistency between the instructions given by the various supervisors and the lack of balance in the regulation of various financial intermediators involved in similar activities. This lack of balance affects the proper operation of the supervised bodies. The need to unify the regulatory authorities also derives from the proposed reform among capital market financial mediators and, in particular, the suggestion to allow all financial mediators to market a variety of products, including insurance.

Main Principles of the Proposed Reform

One possible advantage to be gained by establishing a single regulatory authority in Israel is that it will make it possible to attain a general view of the financial market, rather than just the various units operating within it, and will thus support the formation of a more balanced and competitive financial market. It is, however, important to emphasize that a necessary precondition for establishing a regulatory authority that can perform its role in maintaining the stability of the financial sector and constituting a better solution than existing solutions, is to maintain the full independence of such an authority, both from political considerations and pressures, and from the bodies it supervises. This independence must, of course, be enacted in legislation.

It is possible that the shift to a single regulatory authority will undergo a number of intermediate stages that will facilitate the introduction of adjustments and amendments based on the experience accumulated in Israel and the world, but the final goal is the full merging of the present three authorities into a single authority.