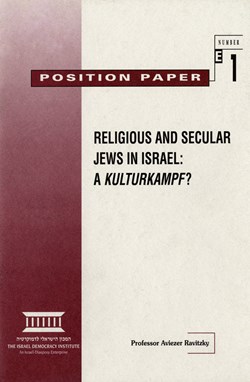 Religious and Secular Jews in Israel

Prof. Aviezer Ravitzky , one of the leading researchers in Philosophy of Israel, reveals a surprisingly optimistic view of the struggle between religious and secular Jews in Israel in Israel. He wonders, for example, whether we should not take comfort from the fact that both the ultra-Orthodox and the Reform, who were originally antagonistic to the idea of Zionism, are conducting their struggle today in the Zionist arena of the State of Israel.

In recent years, Israeli society has been increasingly torn apart by tensions concerning religion and state, the sacred and the profane, rabbinical rulings and individual liberty, and parochialism and universalism. According to widely held public opinion, these tensions reflect an inevitable trend toward cultural fragmentation and erosion of the nation's collective identity. This trend, it is said, threatens to sunder the classic Zionist synthesis and the consequent Israeli ethos that sprang from it. This view has recently been expressed most eloquently in a number of publications, all of which speak of the post-modern (and post-Zionist) disintegration of the values and the underlying consensus that comprise the foundations of Israeli society.

In this position paper, Prof. Aviezer Ravitzky suggests a different way of looking at these very same developments and attempt to show that the current confrontation between religious and secular Israelis does not necessarily represent a process of alienation and disintegration. Rather, it can be seen as an expression of social maturation and cultural diversity.