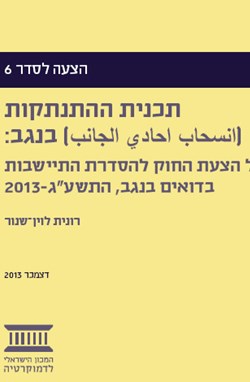 Regulating Bedouin Settlement: A Disengagement Plan for the Negev

Motion for the Agenda 6

An analysis of the governmental bill for regulating Bedouin settlement in the Negev, which would implement a comprehensive solution to the land dispute between the State of Israel and the Bedouin minority, especially regarding the “unrecognized villages” in the Negev.

Deciding the future of the governmental bill for regulating Bedouin settlement in the Negev is one of the greatest challenges facing the 19th Knesset. The proposed law would implement a comprehensive solution to the land dispute between the State of Israel and the Bedouin minority, especially regarding the dozens of “unrecognized villages” that are home to approximately 90,000 people. The bill requires the Bedouin whose claims have not yet been settled to choose, within a short period of time, between pursuing their claims in court and receiving compensation in money and land. It also grants a plot of land to any Bedouin in the Negev who does not have a residential plot, in exchange for leaving the land that he or she currently occupies. At the end of the designated period of regulation, the state will be authorized to conduct accelerated eviction proceedings and register the remaining land in its name.

Regulating Bedouin Settlement: A Disengagement Plan for the Negev, a study by Ronit Levine-Schnur of the Hebrew University of Jerusalem, offers a comprehensive analysis of the bill and examines whether the complex legal arrangements that it proposes strike an appropriate and constitutional balance between the rule of law and human dignity, and between the desire to develop the Negev for all of its inhabitants and the obligation to act equitably and without discrimination.

The examination of the details of the proposed legislation reveals a harsh picture:

It appears that the bill is motivated by fear of a Bedouin takeover of the Negev, and therefore grants unusually strong powers to the state. The intensity of this concern, however, is extremely exaggerated. For example, the lands in dispute constitute less than 2% of the territory of Israel and less than 3% of the Negev. In addition, over two thirds of all Bedouin claims have already been decided in favor of the state.

Based on the findings of this study, it is recommended that the proposed bill be amended as follows:

Adopting arrangements in the spirit of the recommendations of this study would ensure the suitability of compensation and the fairness of the proceedings. It would also strengthen the relations between the State of Israel and its Bedouin citizens, and avoid exacerbating the sense of alienation and detachment that this minority group feels.

Ronit Levine-Schnur is a doctoral student in the Faculty of Law at the Hebrew University of Jerusalem, and holds an MA degree in law and urban and regional planning. Her research interests are in property, land use and planning law, urban development and urban justice, and she lectures on these topics at the Hebrew University of Jerusalem and in the Urban Design program at the Bezalel Academy of Art and Design.

This study has been published as part of IDI’s Equality and Israel's Arab Population project.