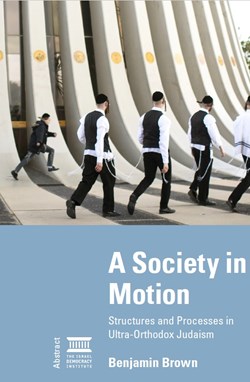 A Society in Motion

Structures and Processes in Ultra-Orthodox Judaism

Abstract of the Hebrew Publication

Orthodox men are going out to work;

the haredi education system is becoming

more diverse; The ultra-Orthodox media is

woman is more aware of her important

place as a breadwinner, and thus as a

discrimination is more acute; Those joining

the haredi community are gradually taking

their place as a semi-independent sector;

The numbers leaving the fold are growing, as are the numbers of school dropouts, many of whom adopt delinquent behavior; and the move of many ultra-Orthodox families to Israel's periphery often serves as a lever for development in these areas, yet in some cases generates tensions. At the same time, changes are emerging in the ultra-Orthodox intellectual world: new variants of halakhic scholarship, and especially of halakhic rulings, are developed and an ever-expanding variety of books on religious thought add new products to the Jewish Torah library. The current book seeks to presents the dynamics that characterize this  society, in sharp contrast to its static and fossilized image, in an academic-yet easy- to-read style.