"Terrorism" is an ambiguous term whose definition is widely disputed and constantly shifting. This article, originally published in Hebrew in IDI's online journal Parliament, outlines the debate about the definition of "terrorism," analyzes the scope, frequency, and ramifications of terrorism, and concludes with two ways to understand terrorism as a significant threat to democracy.

"Terrorism" is an ambiguous term whose definition implies a political act. Over the years, the term has been used more frequently, and today it often seems to be synonymous with "evil." Generally speaking, the term "terrorism" can be used to describe a "systematic use or threat of violence in order to achieve political goals." But this definition does not address some of the problematic aspects of the phenomenon, and does not differentiate between terrorism and other forms of political violence, such as revolution, uprising and guerrilla warfare.

Throughout history, one encounters several main types of terrorism:

International organizations, notably the UN, have expressed the international stance that terrorism disregards human rights,  first and foremost, the right to life, to freedom and to security; poses a major threat to nations and to moderate democratic politics; and threatens peace and security throughout the world (Saul, 2006: 27–38). But in practice, acts that are called "terrorism" by one side are often declared legitimate national struggle by the other and people, who are considered "terrorists" by one side, are frequently perceived as "freedom fighters" by the other. As a result, there is no official agreement on the specifics of a comprehensive definition of the phenomenon, and it must be understood by cross-referencing several national laws and regional or international rulings.

The Definition of Terrorism and the Dilemmas that Arise from it

These are the conditions that jointly comprise a terrorist act:

But this definition is also problematic:

In practice, the existing definitions of terrorism rely heavily on political interests and primarily depend on the group that defines it.

Some examples of terrorist acts:

Terrorism's greatest power lies in the arbitrary nature of its victims and in the large amount of coverage it receives in the media. Today, in addition to "conventional" terrorism, there are also the risks of the use of weapons of mass destruction and cyber-terrorism. The ability to use diverse methods in order to wreak havoc indicates that although terrorism has not yet become an existential world threat, that day is not far-off.

The Scope and Frequency of Terrorism

During the 1980s until 2003, the U.S. State Department published an annual report entitled Patterns of Global Terrorism, which included data regarding the number of incidents of international terrorism and the number of casualties that there were each year.

Figure 1: International Terrorist Attacks and Victims, 1982–2003 (According to the US State Department) 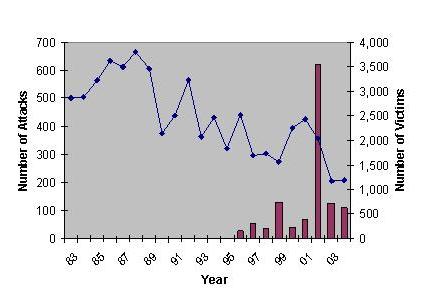 *Source: Patterns of Global Terrorism, The US State Department website.

Despite the problematic nature of the report's subjective definition of a "terrorist act", one can see a continuous decrease in the number of terrorist acts. (The unusually high number of victims in 2001 is due to the September 11th terrorist attacks on the World Trade Center.)

The Ramifications of Terrorism

The most severe direct ramification of terrorism is the loss of life. Nonetheless, terrorism's power lies, first and foremost, in the fear that it generates as a result of the enemy's anonymity, the arbitrary nature of the victims, and, especially, as a consequence of the media's tendency to intensify the fear and trauma that it generates among the citizens. For example, the terrorist attacks of September 11th received much more media coverage than far greater disasters.

Indeed, terrorism can escalate existing conflicts and deeply affect public opinion, but despite the fear created by terrorism, life usually returns to normal after a relatively short period of time.

Conclusion: Terrorism as a Threat to Democracy

Terrorism poses a direct and indirect threat to democracy. The direct threat is a result of terrorism's capability to undermine the fundamental security that nations and international organizations are supposed to provide their citizens, which is the foundation of the legitimacy of a government. Terrorism also poses a direct threat to the basic human rights of life and property. But the indirect threat to democracy is by far the most dangerous. The war on terrorism challenges the democratic institutions of the nations and their ability to ensure the security of their citizens without harming innocent people. The terrorist attacks of September 11th signal a turning point not only in the intensity of global terrorism, but also a warning to any enlightened democracy that wishes to combat the threat of terrorism.

Indeed, disputing the claim that it is important to define terrorism in order to effectively battle it, some argue that clearly defining terrorism and making it a singular criminal offense may serve to authorize the deprivation of the human rights of the suspects. Regardless of the definition of terrorism, democracies must beware of the danger of transforming the war on terrorism from a means of defending democracy to one that undermines its foundations.