In an op-ed in Yedioth Ahronoth, Prof. Yedidia Z. Stern asserts that the Jewish people who left Egypt were "other" and stresses that if we identify with the stranger, the poor, and people with disabilities, the historic redemption of our ancestors will be an ongoing redemption for our generation. 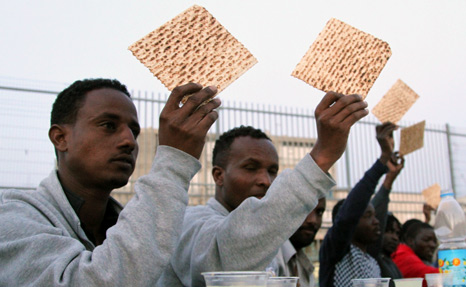 This year, as in other years, the highest rated event in Israel will not be a contemporary event, whether a political event, a sports event, or a cultural event. Rather, it will be a traditional event that commemorates the past: the Seder. Like dozens of previous generations, on the eve of Passover, some 85% of Jews in Israel will gather for a ritual dinner and will focus on an ancient, uncorroborated tale with a well-known ending: The story of the Exodus.

We are not alone in telling this story. Its special status transcends the boundaries of time and space. Many people the world over interpret the story of the Exodus through the prism of what they hold dear. They see it as the revolution for freedom of a group of slaves (the reading of black leader Martin Luther King), a political revolution to create a nation (Princeton philosopher Michael Walzer), an expression of longing for autonomy and a homeland (Theodor Herzl), or a struggle to maintain religious identity under difficult circumstances (the Sages). The story of the Exodus is a formative epoch that succeeds in moving everyone, each in accordance with the context of his or her life.

Thus it was in the past; so it is today. A careful reading of the story of the Exodus reveals a love letter written by previous generations to 21st century Israel on the most central issue on our national agenda: the need to accept the other and the different, in all their many forms.

The ultimate "other" in Israel is the non-Jew who lives among us—whether a member of a national minority or a refugee. For this reason, the Torah sears the imperative "Remember that you were a stranger in Egypt" into our consciousness. Pharaoh's hatred of the Jews, like the hatred of those who "rise up to destroy us" in every generation, stems from the fact that the Jews are different, both nationally and culturally. At the start of the exile in Egypt, the Children of Israel were the brothers of Joseph, Pharaoh's second in command, and accordingly were warmly welcomed. But then a new king arose "who did not know Joseph," and the drama began. Lack of knowledge of the other—whether in ancient Egypt or in Israel today—leads to estrangement and inconsiderate alienation, and can even breed suspicion that sees the other as a threat that must be addressed. Pharaoh's shocking decree "every newborn son shall be cast into the river" becomes possible if we choose not to see the unique face of the stranger, ignore the name given to them by their parents, and demonize them, through no doings of their own. We must remember: the other among us today is who we ourselves were in Egypt.

The poor person is also "other" in the Israel of 2014. Once a model welfare state, Israel today has one of the highest levels of income inequality of any country in the West. Every fifth family is considered poor and one-tenth of the population is hungry. While non-profit organizations try to support the poor, Israeli law does not include basic rights that should be self-evident: social rights that ensure a dignified existence for all.

The Passover Seder offers a remedy for this: "And you shall remember that you were a slave in Egypt." Our basic experience as Jews has been impressed with the memory of the deprivation of slavery; this is the common denominator of the Jewish people. We all ate the matzah—the bread of affliction. For this reason, at the beginning of the Seder, we recite "this is the bread of affliction." We reaffirm our social responsibility and invite the other, the person who has no financial means, to join us in our intimate family meal: "Let all who are hungry, come and eat." We must feel: the poor people among us are who we ourselves were in Egypt.

In the State of Israel today, there are some 600,000 disabled people who are also considered "other." Beyond the objective hardships of their lives, they are forced to live with a stigma; their essence seems to be defined by their disability. The story of the Exodus, however, teaches us the opposite. Its hero, Moses—like Isaac who was blind, Jacob who limped, and some of our foremothers who were barren—had a disability. Moses had a stammer. Yet his faltering voice echoes through generations. With broken syllables, Moses led a nation of slaves to freedom. According to Jewish tradition, many of his followers were also disabled; affected by the horrendous conditions of the slavery of Egypt, the majority of Jews who crossed the Red Sea were lame, maimed, or blind. We must know: the people with disabilities among us are who we ourselves were in Egypt.

Thus, at the start of the nation of Israel's journey through history, all of its members were others. They were persecuted, they were slaves, and they were disabled. Against this background, the Haggadah's famous directive that in every generation, Jews must see themselves "as if they came out of Egypt" takes on a deeper meaning. Each of us must see ourselves as "other" even if we belong. While enjoying the protection and security of our Seder, we are called to continue the Jewish journey of solidarity with the weak and the marginalized. If we understand that we ourselves are the other, the historic redemption of our ancestors will be transformed into an ongoing redemption for our generation.

This article was originally published in Hebrew in Yedioth Ahronoth on April 10, 2014. An English version was published by Ynet on April 15, 2013.