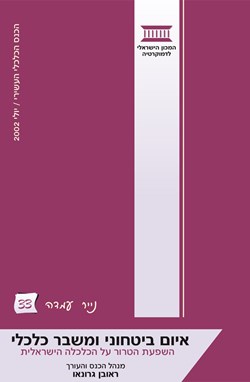 The Security Threat and the Economic Crisis

Terrorism's Impact on the Israeli Economy

Written for the 10th Caesarea Forum in 2002, this analysis investigates the influence of terrorism on various economic variables, using a model that establishes the level of personal security, defense expenditure, Gross Domestic Product, consumption, and saving of a given level of security threat.

Written for the 10th Caesarea Forum in 2002, this analysis investigates the influence of terrorism on various economic variables, using a model that establishes the level of personal security, defense expenditure, Gross Domestic Product, consumption, and saving of a given level of security threat. It investigates the impact of terrorism on Israel's economy and the relationship between the two, as well as the effect of national security on individual behavior.

Fighting terrorism vs. other wars: If we take as a given that increasing the defense budget is not possible, making changes in the framework of military spending becomes necessary. Different priorities must be set, in light of the fact that the current objectives differ from those of the past. The fight against terrorism requires different means than those needed to fight against armies. We built an army most of whose military capital stock is not involved in the current fighting, since it is intended for use in other sorts of wars. The current campaign is manpower-intensive and capital-modest. Therefore, there is tremendous pressure on the regular divisions. As this reality continues, we will have to find capital stocks to replace the manpower. The separation fence is one possibility.

Another point that was raised in light of the new challenges posed by the current confrontation is related to the right way to allocate manpower among the IDF, the police and the border police.

Streamlining the defense budget: According to the approach taken by the ministry of finance's budget division, the defense budget is meant to answer three needs: build-up, readiness, and routine activity. Currently, the allocation needs to change, and resources need to be diverted from build-up to routine activity and readiness. Concurrently, budgets need to be redirected within the components of routine activity through streamlining, savings, etc. The intention is to divert 5-10% of the regular budget towards the fight against terrorism and increasing readiness, e.g., NIS 2-4 billion. In this connection, the chief of l staff's financial adviser notes that the army has undergone and will continue to undergo a process of streamlining, even in times of fighting. Thus, the number of senior career officers, from the rank of major, and NCOs has been reduced. Similarly, the director general of the ministry of defense noted that his office was willing to freeze wages. At the same time, it was noted that lowering wages for personnel is not justified, since this wage constitutes about 41% of the defense budget, compared with other Western countries where the wage component constitutes 50-60% of the defense budget.

Regarding the ministry of defense's budget allocation, it was suggested that a distinction be made between ongoing expenses and foreign procurement expenses–both of which yield no return–and outlays for R&D or procurement here in Israel, which do provide a return and added value, and which led to the growth of our high-tech industry. It would therefore be a good idea to negotiate with the Americans so that while the amount of aid is reduced, we might be allowed to make greater use of the aid budget for procurement and R&D investments here in Israel. For example, if we purchased American-made cars for IDF personnel, ambulances, fire engines, etc., that would free up a lot of shekels for domestic procurements that would help employment.

Privatizing security services: There are said to be 50-75 thousand security guards at businesses and other institutions. This puts a lot of pressure on the labor market, reducing future growth potential in an economy where in any case the level of participation in the work force is among the lowest in the Western world.

Still, opinions were voiced that the finance ministry should create incentives for the army to privatize, as much as possible, some security services, thereby easing the burden on the defense budget.

Sharing the burden: The defense budget will grow not only because of the requisite resources, but because the reservists, on whom the full defense burden falls, will need to better treatment. There is a stratum of people who bear most of the burden, and therefore any attempt to wrong them is not a good idea. The smaller the stratum of those who serve in the army, the more important it is to provide them with suitable compensation, starting from the period of compulsory service. The compensation does not have to be immediate. Like in the United States, it can be expressed in reduced cost loans for purchasing apartments, opening businesses and perhaps even free tuition at universities.

The fight against global terrorism: Since September 11, 2001, the confrontation with the Palestinians has been elevated to a key position in the fight against global terrorism and the legitimacy of the suicide bomber phenomenon. It may not be unrealistic, therefore, to expect the United States to finance our part in this global struggle. Our contribution to the American campaign in intelligence and other spheres is decisive.

In this context, it was noted that with the current administration's approach, it is doubtful whether American aid could be increased. Still, aid might be increased in two areas: the war on international terrorism and the battle against surface-to-surface missiles. We are very active in the latter, and in the former we would do well to achieve better coordination between all government authorities, such as the police, the General Security Service, and the ministries of finance and foreign affairs. This would make it possible to receive about $200 million more.

Macroeconomic policy and defense expenditures: The State of Israel finds itself in an impossible position. On the one hand, production capability is falling, since there is no opportunity to exploit the stocks of production factors in the economy efficiently-- for example, because of the tremendous increase in security guards, who produce only an intermediate product--while trade conditions with other countries have worsened. On the other hand, there has been an increase in demand by the public sector for expenditures, mainly for security, but in the social sphere as well. Additionally, maneuverability between budget items is limited, for fear of losing credibility. Therefore, reform in the area of expenditures in the public sector is required, since public expenditures in Israel are very high and inefficient (for example, in education).

An analogy was made between the current situation and the period of the Yom Kippur War and the lost decade that followed it, with the inflationary spiral and the banking collapse. The main goal should be to prevent a second lost decade. And indeed, unlike a cyclical downturn, this is an economic crisis that requires other tools: put simply, neither fiscal nor monetary expansion. The lessons of the past must be learned, and the deficit should not be increased, meaning we must learn to live with a low deficit. Another approach that was raised in the discussion argues that if indeed because of a change in individual behavior there is less private consumption and less investment, now is precisely the time to lower the interest rate, reduce taxes, and increase public consumption.

In this context, the approach taken by the finance ministry's budget division was that it is possible to maintain the same level of defense spending as in 2002, which is 20% of government spending--about NIS 40 billion. On the other side, the ministry of defense's approach was that the gaps being referred to total about NIS 3-4 billion, and it is very important not to exceed a certain limit of risks, especially in light of the situation on the northern border that could ignite at any moment. There is also the threat, which, too, is not merely theoretical, of developments in the region of Iraq and Iran. The responses to this matter lie in investments that will bear fruit within 5-7 years.

One could say that even if NIS 3 billion is found for the current defense budget--presumably at the expense of transfer payments--and another $1 billion for the separation fence from the Americans, there is no guarantee that in another year or two per capita growth won't remain negative. To the contrary, the concern was raised that at the current GDP per capita will shrink from $17,000 to only $13,000.

Implications for international trade: Exports to Europe fell by $650 million during the first five months of the year, and by $200 million in the last month alone. The European Parliament recommended to the European Union, that the trade agreements with Israel be suspended. The recommendation was not accepted. Europe accounts for a third of Israel's exports and 40% of its imports. The security and economic situation could lead to a phenomenon in which any model could collapse if decisions of the sort described above are made in Europe.

Great concern was expressed over the fact that it is impossible to get large projects from the really big companies, since this requires their representatives to spend a number of days visiting the plant and development sites, something which is already impossible. A proposal was therefore raised to set up joint projects with our neighbors, Jordan first, in spheres such as water, medicine, electronics, etc. This approach would win the support of outside investors--Europeans, Japanese and others--and is worth supporting.