An IDI survey examines public opinion on Israelis preferred areas of study and participation when undergoing vocational training during the economic crisis resulting from the coronavirus.

In a survey conducted by the Center for Governance and the Economy at the Israel Democracy Institute during the corona crisis, we examined public opinion regarding vocational training in these times. The survey was conducted with the assistance and methodological oversight of IDI’s Guttman Center for Public Opinion and Policy Studies. The Midgam institute was in charge of designing the survey sample.

Interest in participation: More than half (52%) the respondents indicated they were interested in taking part in government-funded short-term vocational training programs, lasting between 3-6 months. Not surprisingly, the rate is higher (66%) among the “corona-unemployed” (laid off, on forced unpaid leave, and self-employed not working because of the situation). 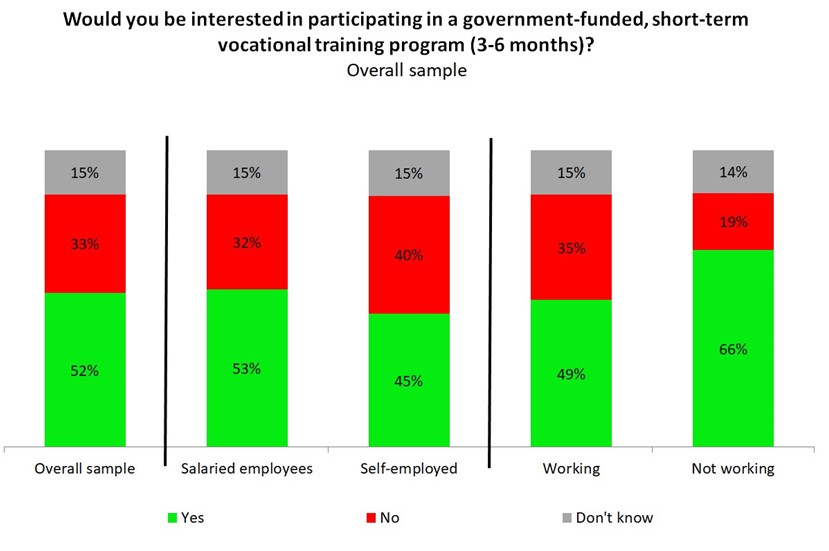 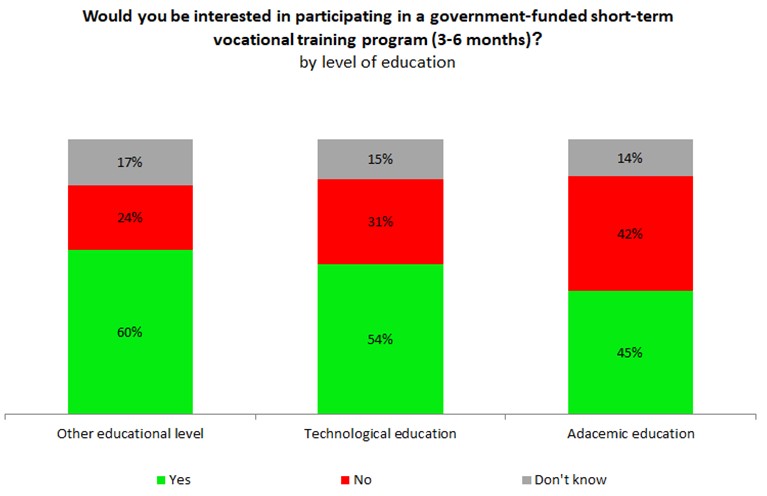 Interest in participation in a vocational training program drops significantly beginning with age 55: Thus, while among those up to the age of 54, the rate of those interested in participating is about 55%, in the 55-64 age group, this drops to 46%, and among those age 65 and over, it drops further to 27%.

It is likely that the decline in the interest in participating in vocational training programs among older adults stems from the fact that older adults perceive their career horizon as too short to make the investment in training worthwhile. 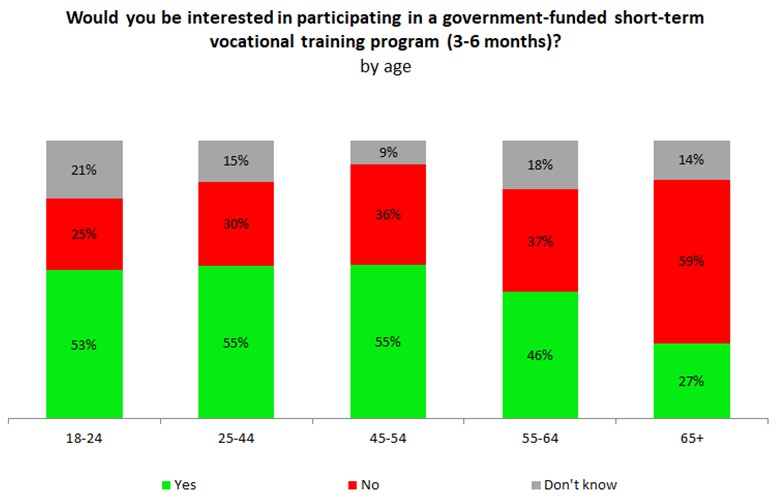 The percentage of high-tech employees interested in participating in vocational training programs was relatively low, compared to employees in other economic branches: 42% and 53%, respectively. 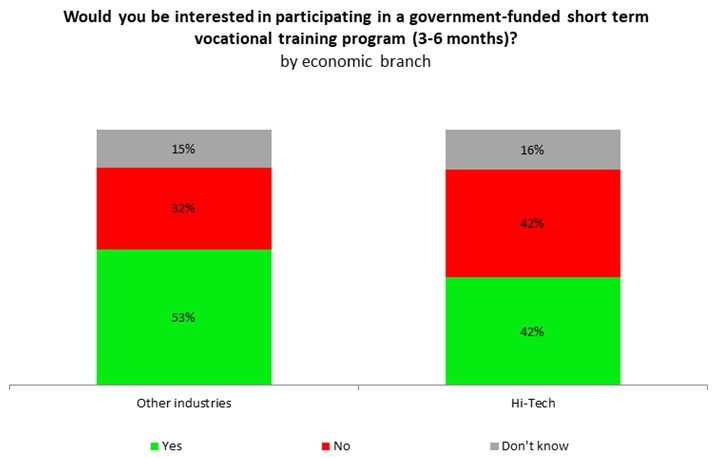 Of those interested in participating in vocational training programs, 56% indicated that having the option to choose their field of training is a pre-condition for their participation. A similar percentage (54%) stated receipt of living allowances equivalent to unemployment benefits; 48%—the guarantee of a job in the field in which they would be trained; and only 19% stated as a condition the involvement of the employer in their training. Only 6% agreed to participate in such training unconditionally. 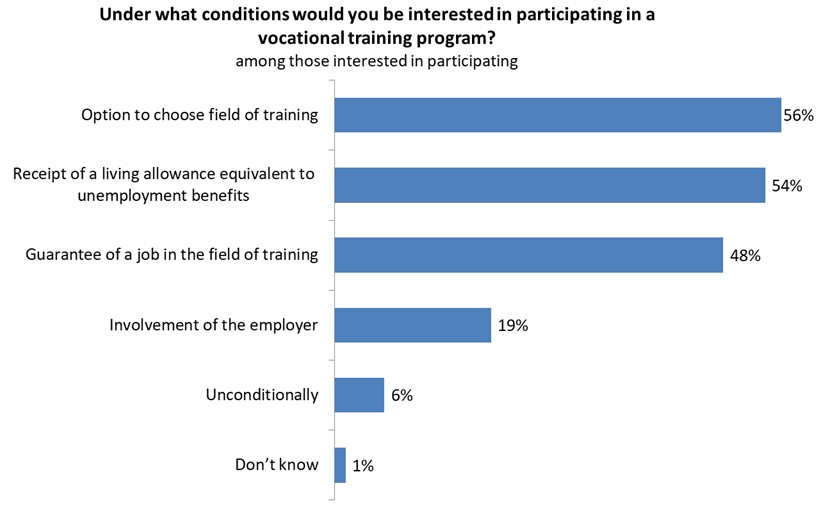 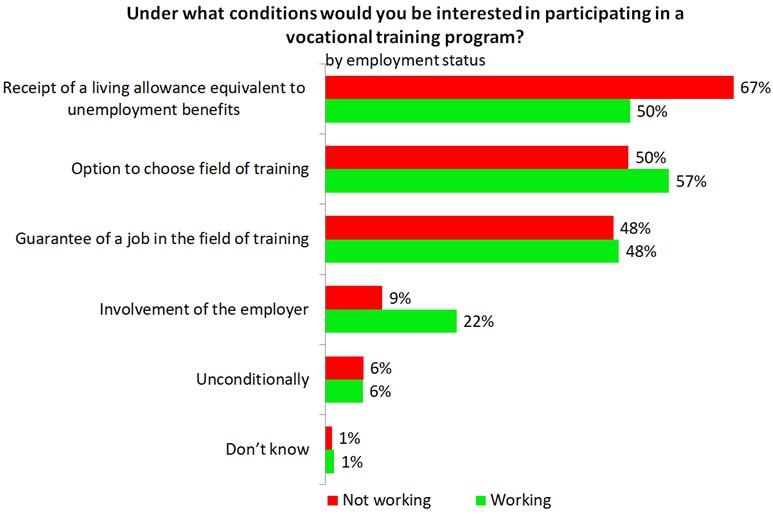 In addition, the percentage citing employers’ involvement as a condition for their participation in vocational training programs was more than double among those who were working (22%) compared with those not working (9%).

Young people, ages 18 to 24, gave highest priority to a guaranteed job in the field (70%) as a condition for their participation, far ahead of other conditions. In second place was the possibility of choosing the field of training (58%) and third receiving living allowances equivalent to unemployment benefits (54%). 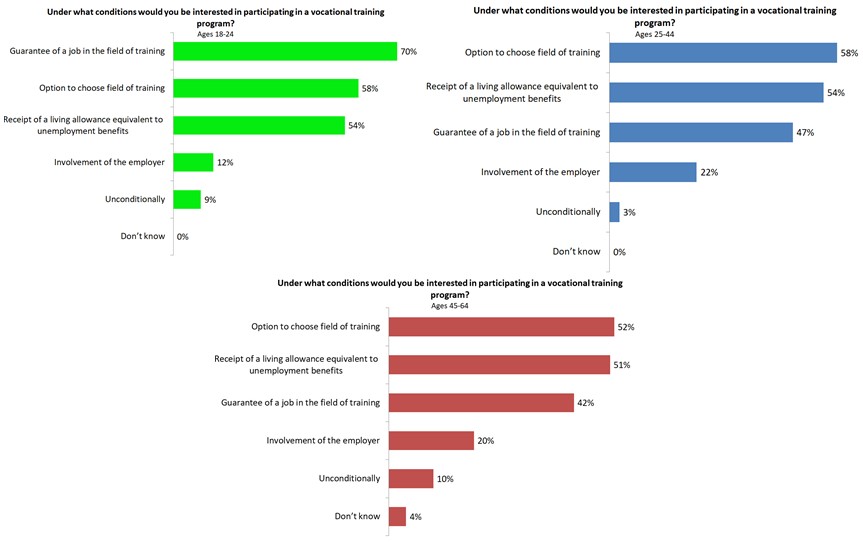 By contrast, older respondents (ages 25-44 and 45-64) rated two other conditions as most important: The possibility of choosing the field of training and receiving living allowances equivalent to unemployment benefits, and only next—guaranteed employment in the field as a condition for participation in training. These gaps indicate differences in the level of concern among different populations with regard to finding a job in the field in which they would be trained, and may indicate different needs in each of the groups. 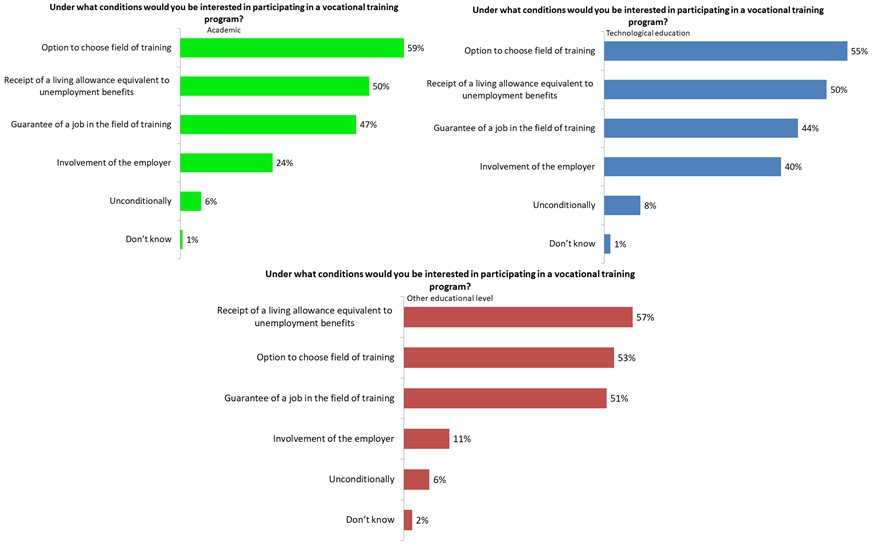 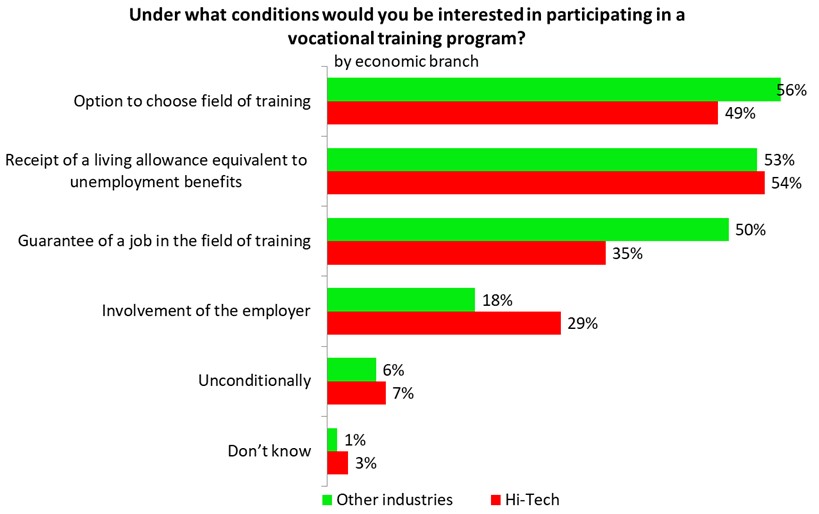 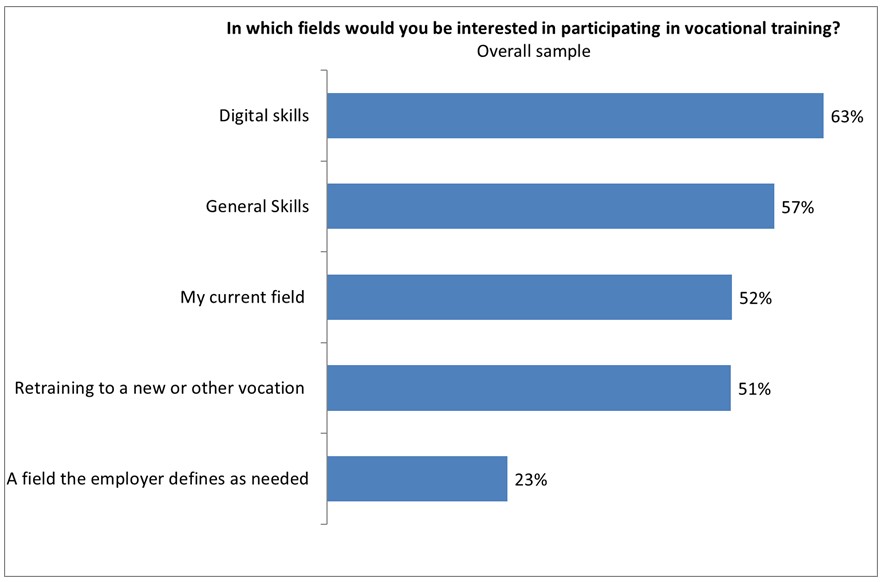 At all ages, the option of training in the field an employer defines as required, ranked last. 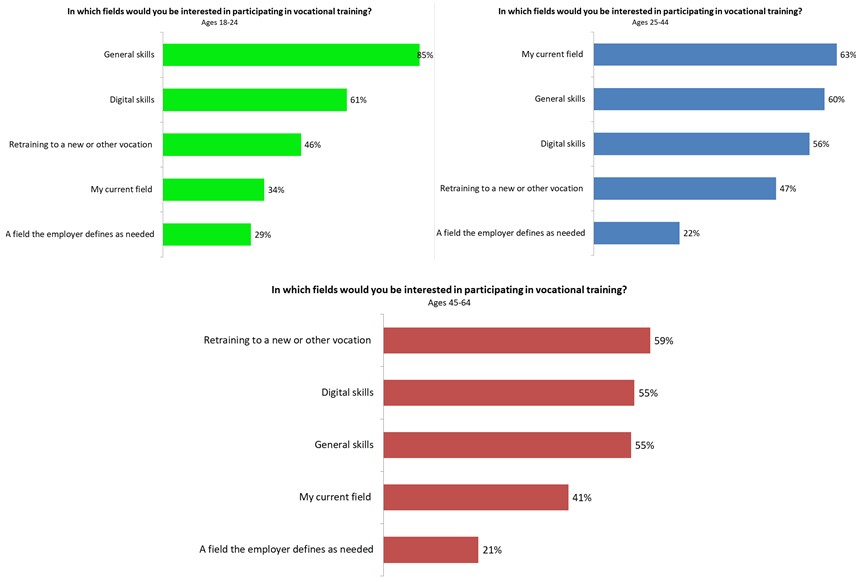 Among those with relatively low education (not academic or technological), training for general skills ranked first in preferences (69%), followed by digital skills training (55%).

Here too, all groups ranked training in areas that an employer defines as required, as lowest in priority. 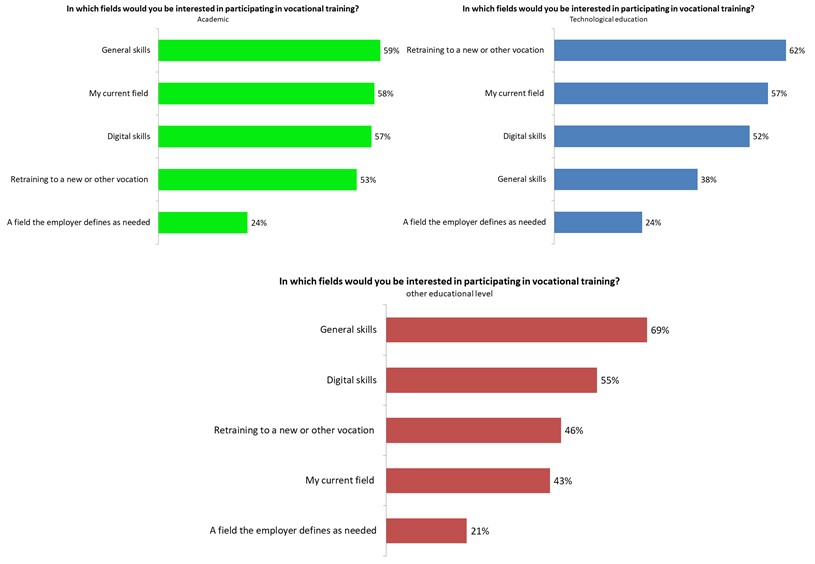 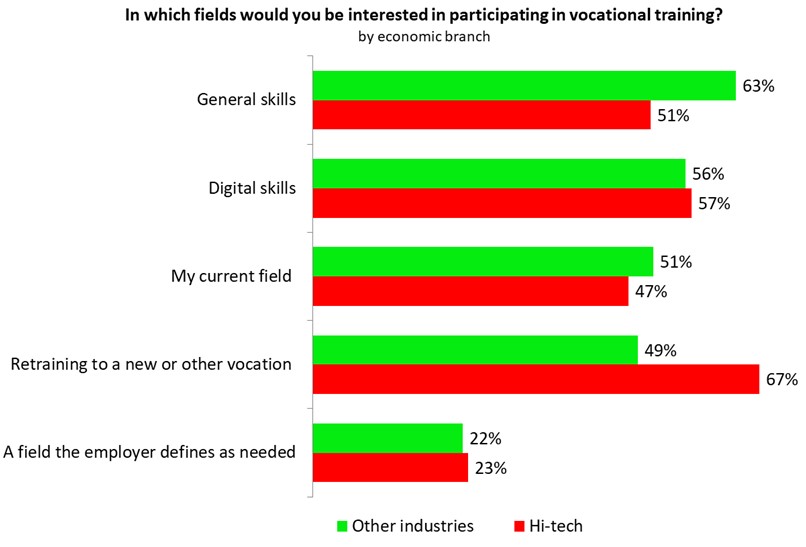 Most (84%) of the respondents who were not interested in taking part in government-funded short-term vocational training programs (which comprised 33% of the total sample) stated that this is so because their current training is sufficient, or because they do not need training. An additional 13% cited their lack of trust in government training, and only about 3% cited the fear of losing unemployment benefits as the reason for their lack of interest in vocational training (the latter consists solely of salaried employees, since the self-employed have no unemployment benefits).

Thus, despite the fact Israel’s labor productivity is low as compared to the OECD average, and that the Israeli worker's basic skill set is also low when compared internationally (according to the PIACC survey), most of those who indicated that they were not interested in participating in vocational training programs stated that their training is sufficient or that they do not need training. This implies a need for informing and educating the public as to the importance of vocational training and enrichment, as a means both for raising labor productivity alongside improving wages and enhancing opportunities for advancement. 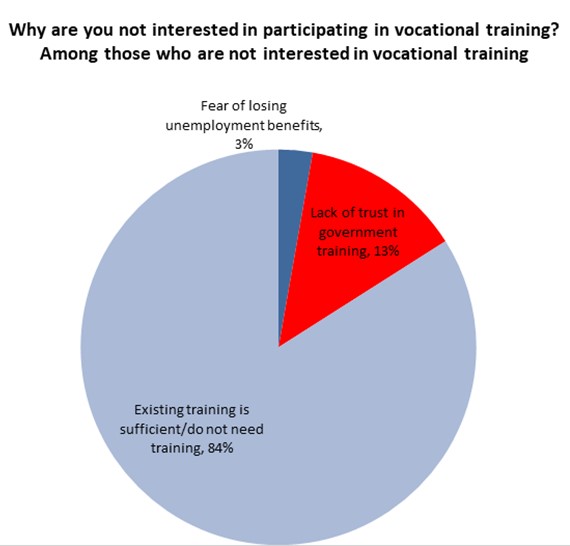 Tags:
Socioeconomic Policy,
Coronavirus,
The Labor Market,
Unemployment,
Future of the Workforce,
Center for Governance and the Economy