Has Israeli society always been characterized by a sense of closeness with the state? During which periods did the wish to remain in Israel waver, and when were almost all Israelis certain of their desire to stay?

Feeling Part of the State and Its Problem

The present article examines trends in Israeli public opinion in the area of national solidarity. The findings show that the extent of the desire to live in Israel, and the sense of belonging to the state, differs from period to period.

The proportion of Israelis who feel that they are a part of the state has fluctuated over the past several decades, with 2007 registering a lower percentage than previous years. In 1979, 85% of Jewish Israelis felt a part of the State of Israel to a great or a very great degree. This measure remained more or less steady over the course of 1993, 2003, 2004, and 2005. More recently, however, the proportion of Israelis who feel close to the state has declined somewhat. As shown in graph 1 (below), roughly one-half of Israeli young people (ages 18–30) reported in the most recent poll (2007) that they feel alienated from the state and unconnected with its problems. The decline in the percentage who "feel a part of the State of Israel" is true of all social groups within the Jewish population: For example, among haredim (ultra-Orthodox Jews) there was a sharp drop in this area, from 85% in 2003 to 58% in 2007. Among secular Jews, the decline was more moderate: from 63% in 2003 to 54% in 2007.

The process that took place among immigrants from the former Soviet Union (FSU) is particularly noteworthy. In 2003, the proportion of newcomers who felt part of the state was virtually identical to that of other Jewish Israelis (84% as compared to 82%), while in 2007 a gap emerged between the two groups: only 57% of new immigrants feel part of the state and its problems to a great or a very great degree (as opposed to 65% of other Jewish Israelis). This finding may be attributable to the Second Lebanon War and its impact on the feelings of immigrants who left their previous country due to a lack of security and stability.

Figure 1
"I feel part of the State of Israel and its problems to a great or very great degree"
(Jewish sample only; percentages)

Contributing to the State, Serving and Fighting

The findings below attest only to the sense of belonging to the state, and offer no indication of the respondents' desire to contribute to Israeli society. The following figures illustrate the difference between the feeling of belonging and the actual willingness to contribute: In 2003, 72% of secular Israelis agreed with the statement that to be a "true Israeli," it is very important to serve in the IDF (Israel Defense Forces). Only 37% of the haredi population shared this view. In 2007, 80% of secular Israelis reported a willingness to fight for the state in time of need, as opposed to 69% of ultra-orthodox.

If we examine the willingness to contribute to the state and to fight for it, a fascinating portrait emerges: Most of the immigrants who expressed a willingness to fight are in the 40+ age group, meaning that they never served in the Israeli army and are unlikely to be called upon to do so (see figure 2, below). Among young people who actually serve in the regular army and the reserves, the level of willingness is high and does not differ greatly from that of the rest of the younger Jewish population. The explanation for the militant stance and readiness to sacrifice among the older immigrants may lie in Soviet political culture, which promotes a willingness to sacrifice oneself for the state.

Figure 2
"I would be willing to fight for the state": 2007
(Jewish sample only; percentages)

Who wants to live in Israel in the long term?

There is a slight decline (in comparison with the 1980s and 1990s) in the proportion of Jewish Israelis who are certain of their desire to remain in Israel. This trend is not surprising in light of the international impact of globalization, mass migration movements, and the numerous problems confronting modern-day Israel. There is also a noticeable fluctuation in the opinions of the Israeli public in this regard: the findings for 2000 and 2007 reflected a sense of national frustration, in contrast to 1994, 1995, and early 2006, when a very high percentage of Israelis indicated they were certain of their desire to remain in the state (see figure 3, below).

Who wishes to remain in Israel regardless of the changing reality? It seems that for the most part, adults, haredim, religious, and traditional Jews are certain of their desire to remain in Israel at all points in time. By contrast, young Israelis are less certain, and their opinions shift in accordance with the period (see figure 3, below). It is also possible to distinguish certain differences, however slight, between the approaches of young secular versus young religious Jews: In 2000, 46% of all young respondents wished to live in Israel, while 53% of young religious Israelis shared this view (in 1994, the corresponding figures were 70% and 77%, respectively).

In a sample of FSU immigrants ages 18–45, it was found that the percentage of immigrants who are certain of their desire to remain in Israel is small, even by comparison with that of young Israelis (at three out of four points in time), though the differences generally fall within the statistical margin of error (see figure 3, below).

Figure 3
"Certain of my desire to live in Israel in the long term"
(Jewish sample only; percentages) 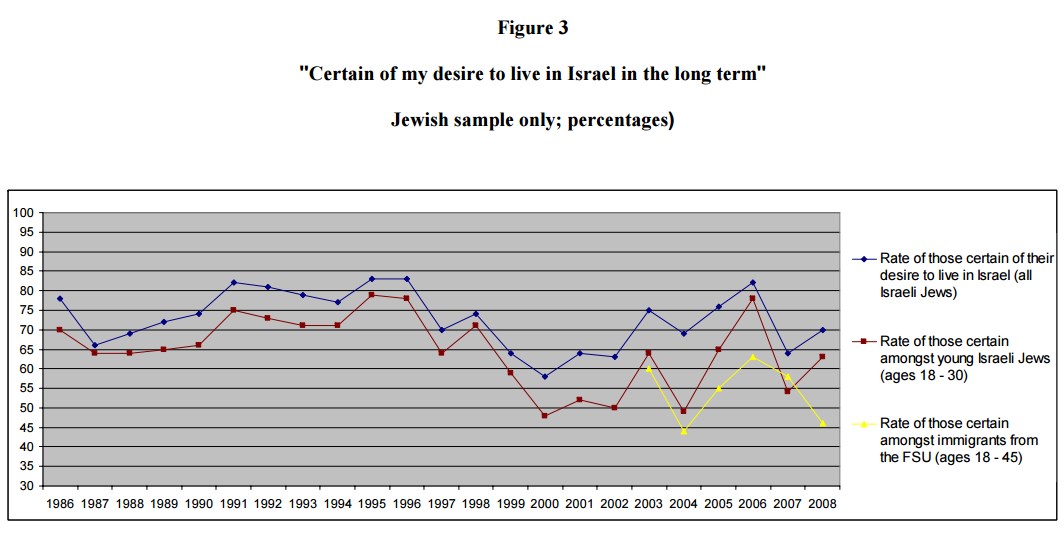 Interestingly, the sharp rise in 2005 in young people's desire to remain in Israel stems largely from a shift in the views of young women. At the same time, it should be noted that the gap between the opinions of women as opposed to men, which was prominent in the 1980s and 1990s (women wished to live in Israel more than men, by a statistically significant difference of up to 10 percentage points), has narrowed in recent years.

Surprisingly enough, significant differences were not found among respondents from different socioeconomic classes. Likewise, differences were not found between educated and uneducated respondents. It would appear that the desire to live in Israel is only partly associated with socioeconomic variables, and that age plays a stronger role in this context. Of course, one should not conclude from this that there is no correlation between socioeconomic characteristics and the tendency to emigrate from Israel. What was presented here was only an examination of individual respondents' wishes; the different options and perspectives within various groups in Israeli society were not addressed.