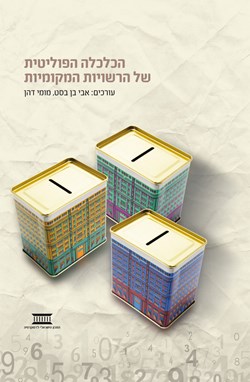 The Political Economics of the Municipalities

An analysis of the primary causes of the budgetary crisis and the crisis of representation in Israel’s municipalities, and policy suggestions for improving the functioning of local government.

Chapter 1: Crisis in the Municipalities - Efficiency versus Representation

Since 2001, many municipalities have been confronted with a serious financial crisis. The problems are not equally severe across the board; they are, however, particularly grave in the Arab communities. Several of the municipalities have had difficulties paying their suppliers, while others have withheld employees' salaries for prolonged periods. In many municipalities, the State has transferred administrative powers from the elected representatives to a specially appointed committee. Several factors have contributed to the scope of the crisis in the various municipalities, including the level of State funding, the political power of the mayor, and the quality of management.

The State assumed a greater role in the management of the municipalities in response to the large deficits that they had accumulated and to their impaired functioning. It should be noted that the extent of State involvement is proportional to the severity of the municipalities' problems. Since 2004, recovery plans have been formulated to aid municipalities in trouble and a portion of government assistance has been made contingent on better tax collection. Accountants have been appointed to audit expenditures on an ongoing basis in many municipalities, and in a few cases, the collection of property taxes has been transferred to collectors employed by the State. It should be mentioned that all the intervention measures implemented by the State have contributed to the improved administration of the municipalities, but at the price of infringing the residents' representation in the management of their municipalities.

In an attempt to address problems in four major areas, we formulated the following recommendations, taking into account the causes of the crisis and how these proposals could contribute to streamlining the operation of the municipalities, while minimizing the harm to the residents' representation in local government.

This chapter analyzes the factors influencing the budgetary status of municipalities in Israel as reflected in their debts and deficits relative to their revenues. This analysis was conducted in two parts: a cross-sectional analysis of 2004 and a panel analysis of the years 1997-2005. The findings show that politics at the local level have a profound effect on budgetary status. Specifically, the cross-sectional data indicate that at the municipal level, there is a correlation between a high degree of political competition and high debt. It was found that Jewish municipalities in which the mayor did not control the local council were characterized by relatively heavy debts. Similarly, Arab municipalities in which there was political competition between several hamulot suffered from high levels of debt. Meanwhile, an analysis of panel data found that municipalities in Israel are subject to the phenomenon of political budget cycles, that is, a rise in local government deficits during election years. Both cross-sectional and panel data indicate that macroeconomic and socioeconomic variables also influence the budgetary status of the municipalities, but - counter to the prevailing wisdom in the literature - the municipality's size has no significant effect on its level of debt.

Chapter 3: The Municipal Budgetary Process in
Theory and in Practice

An examination of the budgetary process in the municipalities indicates a considerable gap between the relative power of the Ministry of the Interior under the law and the degree of its predominance in practice. This gap is reflected in the approval process of the budget by the Ministry of the Interior, and the Ministry's oversight and monitoring of the implementation of the budget by the municipalities. The vast majority of municipal budgets are approved after the fiscal year begins and, at times, even after it ends. For this reason, budgetary monitoring is carried out largely on a budget that has not been approved by the Ministry. In addition, the mechanism for budgetary oversight makes it difficult to identify the emergence of a municipal fiscal crisis in real time or soon after. Moreover, the Ministry of the Interior does not take full advantage of its powers under law, which could enhance the incentives for sound fiscal management of the municipalities. In effect, the Ministry applies the full weight of its authority only after the fact - when there is already a budgetary crisis - through its powers under the legislative amendments of 2004, namely, the appointment of accounting supervisors, tax collectors, and special committees.

Additionally, the budgetary guidelines for welfare services, particularly the matching system, fail to minimize the exposure of welfare services (provided by the social services departments in the municipalities) to local fiscal crises. The dominant interpretation of the formula for allocating balancing grants leaves them open to lateral cuts in the State budget. In effect, the manner in which the balancing grants are budgeted allows central government to force local government, especially the weaker municipalities, to bear the burden of the State deficit.

The fact that people vote in general elections is surprising from a rational choice perspective since the ability of a single vote to affect the outcome of elections is negligible. But in practice, the overwhelming majority of citizens in developed countries vote in general elections for the parliament and for the presidency. This gap between theoretical prediction and reality has earned the name, "the paradox of voting." In recent years, a new line of research has been developed that resolves the paradox of voting by combining group affiliation with the individual's decision on whether or not to vote. This study uses the unique social structure of the Arab population to examine the validity of this theory. For the first time, this paper presents a quantitative assessment of the power of voting along hamula lines in Arab municipal elections. Hamula loyalties affect not only voting patterns (for whom to vote), but also the rate of voter turnout. In line with the theory of social identity, it was found that voter turnout in Arab municipalities is markedly higher in comparison with Jewish municipalities, even after adjusting for differences in income level, degree of political competition, and population size. The study also revealed an inverted-U relationship between the size of the hamula (calculated by the percentage of people with the same last name) and voter turnout rate. This finding is consistent with theoretical models that combine social identity to resolve the paradox of voting.