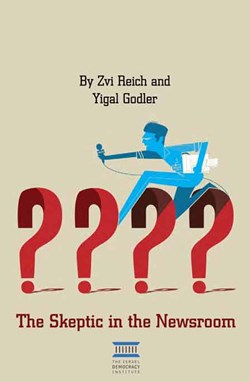 The Skeptic in the Newsroom

Tools for Coping with a Deceptive World

This booklet of questions is part of the Israel Democracy Institute’s initiative to improve journalistic coverage by encouraging reporters to think skeptically. It contains a series of questions that journalists should ask themselves before they publish their articles.
The questions are arranged around four focal points: information; news sources of information; the working methods used to gather data and carry out studies that are later covered by journalists; and the methods used by journalists.

The booklet of questions you are holding is part of the Israel Democracy Institute’s initiative to improve journalistic coverage by encouraging reporters to think skeptically. It contains a series of questions that journalists should, and often must, ask themselves before they publish their articles.

A Note to Reporters:

The questions are deliberately rhetorical. To presume to answer them ourselves is tantamount to trying to replace you, the reporter, even though we were not there, as you were, inside the situation being covered. We are unacquainted with the details, circumstances and precedents, and are not responsible, as you are, for what is published under your byline. You and your editors are in a position that allows you to answer these questions in accordance with the best details you were able to obtain by the time of publication. The questions are formulated in the first-person singular in order to keep them in a format that reporters can easily pose to themselves in real time.

Why skepticism? Why now? Journalism is undergoing a crisis. Fewer (and increasingly overworked) journalists are acquiring less in-depth familiarity with their fields of coverage and the journalistic immune system is becoming less capable of withstanding the forces of spin and deception. This makes skepticism now, more than ever, essential for high-quality journalistic work.

Skepticism has many benefits. It serves as a built-in “bullshit detector” (as journalism scholar and Professor Tony Harcup put it), a self-defense mechanism against manipulative information and news sources. Skepticism also increases a journalist’s self-awareness, illuminating certain facets of the profession that are often gray and ambiguous.