The conference focused on questions pertaining to the Ben Gurion-inspired concept of Mamlakhtiyut (“Statism”) and how its values can be fostered and made relevant to the current realities in Israel today. The conference, organized by IDI and ADL was part of the Anti-Defamation League’s (ADL) Israel Week for Social Solidarity and coincided with the publication of IDI’s Mamlakhtiyut in the Twenty-First Century. 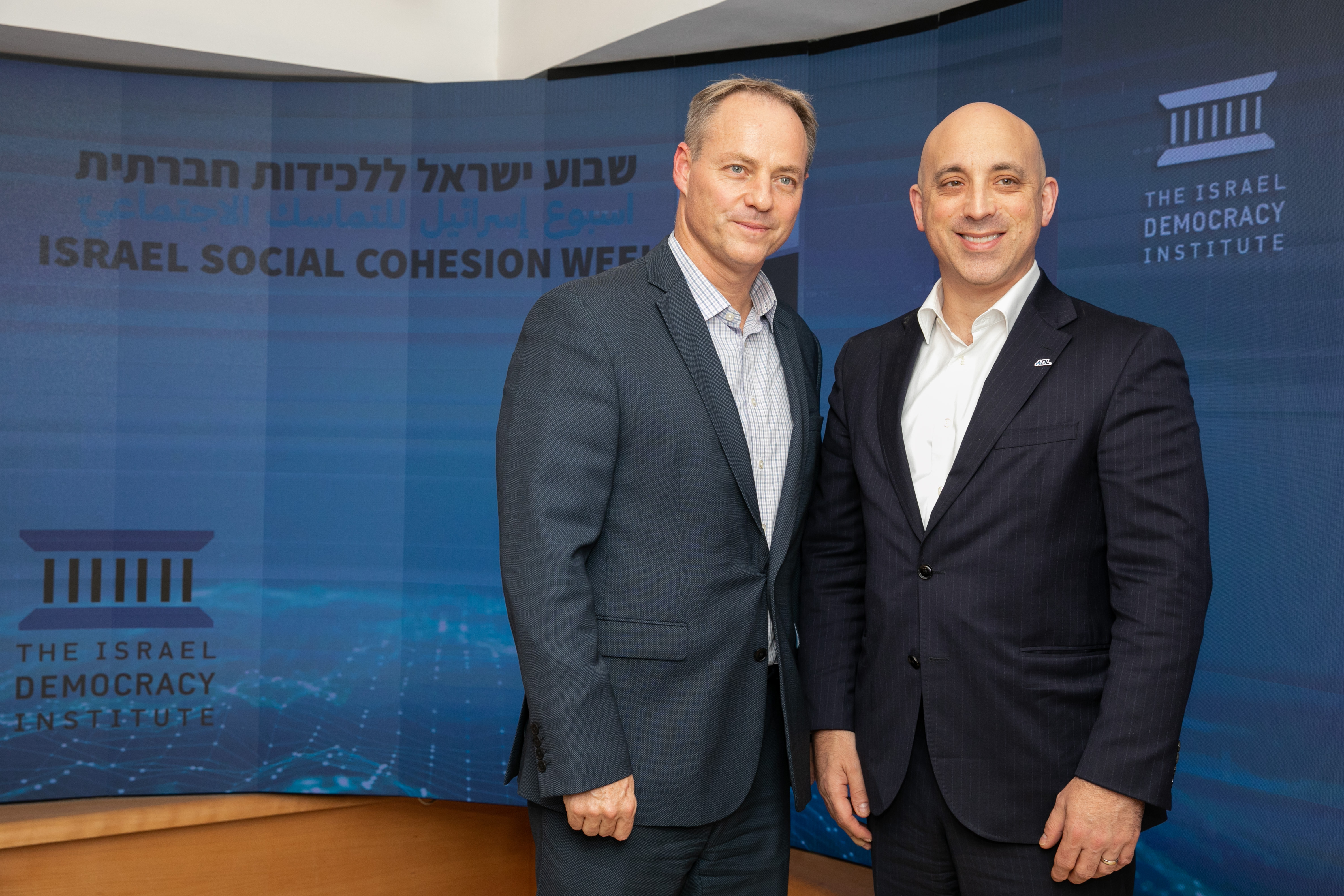 The conference dealt with the phenomenon of Mamlakhtiyut (Statism) in Israel and tried to unravel and explain the ambiguous concept - what it symbolizes and what it pertains to. The conference was opened by Attorney Shlomit Ravitsky Tur-Paz, Director of the Joan and Irwin Jacobs Center for Shared Society at IDI, quoting the words of President Isaac Herzog, who spoke earlier at the swearing-in ceremony of the Knesset. The President quoted the words that were said at the changing of the guard ceremony at the ancient Temple, in which the guard who finished his shift greeted the incoming guard: "Who He who has placed his name in this house will establish among you love and brotherhood and peace and joy."

On the same day that a transfer of power was taking place in the Knesset, Tur-Paz wondered if today, as we are witnessing a changing of the guard in the political system, Israelis still share a common story sufficient to manage such exchanges with a sense of comradeship. When the Israelites traveled and camped in the desert after the exodus from Egypt, each of the tribes had its own special place and its own flag, but they all surrounded the Tabernacle and the Priests and Levites who camped and traveled in the center. Each tribe encamped in its own area, governed by its own values, and did not give up its uniqueness and identity, but there was a common spiritual backbone and values that it was important for all of them to protect. This, in the eyes of Tur-Paz is the embodiment of mamlakhtiyut. Today, in modern Israel, the big question is whether the various ‘tribes’ that make up our society still see the Jewish-democratic connection as an essential element of their identity, and whether, in addition to a bond based on a common fate, they also possess an alliance based on an agreed upon destiny and a common dream that they are willing to gather around and protect.

Yohanan Plesner, President, Israel Democracy Institute - “We live in era of bubbling and poisonous populism, and so the main lesson that we have to learn in the context of mamlakhtiut is how to fill this concept with normative content. Content that can focus on the common good and not favor any particular interest or specific sector.”

Jonathan Greenblatt, CEO ADL – “One of the big learnings after six years of Trump politics in the States – is that in the end democracy is the outcome of norms. This is the oil that makes the wheels of democracy turn. The engine is important – as well as a set of norms. In addition, while we are alarmed at what we see as the fragility of what we thought was a robust system, the people who went to the polls last week in the US seem to have rejected the most vehement deniers of the democratic system.”

Prof. Karnit Flug, Vice President, Research; William Davidson Senior Fellow for Economic Policy, Israel Democracy Institute – “Let’s focus on what the term mamlakhtiyut means in the economic sphere. Economic policy, that would be considered mamlakhty is one that focuses on the well- being of the whole society and future generations and not on sectors or special interest groups. The Israeli economy is doing well in comparison with others, but it is quite divided and fragmented – we have the high-tech and the rest, various population groups, the state of Tel Aviv and the rest of the country. Some parts have benefited from the prosperity, and many have been left behind. Thus, a mamlakhty policy would ensure that everyone will enjoy the prosperity. The growth should be inclusive, sustainable over time and environment friendly. An important element, that can ensure this, is a strong professional civil service.”

Prof. Suzy Navot, Vice President, Research, Israel Democracy Institute – “Democracy is not only the rule of the majority. Definitely not. Democracy is also an effective protection of human rights, especially the rights of minorities in society. That is the reason why in every democracy you have checks and balances in order to avoid absolute power in the hands of government ruling at a specific moment. That is exactly the problem in Israel, because its constitutional structure exposes it to the dangers of absolute power much more than in any other country.”

Prof. Mordechai Kremnitzer, Senior Fellow, Israel Democracy Institute– “To rule out 20% of the population (Arab Israelis) is not a good sign of mamlakhtiyut. One of the most troubling things we see is that in public opinion surveys a majority of Israeli Jews think that Arabs shouldn’t take part of important policy decisions”

Prof. Dan Avnon, Hebrew University of Jerusalem – "Today the debate about mamlakhtiyut is about what is the political system? What are the values of a Jewish and democratic state? Are there shared fundamental values that precede and go beyond this generation? Too many people turn to statehood as an excuse not to do the work they need to do."

Prof. Yedidia Stern, President, the Jewish People Policy Institute - “Mamlakhtiyut should be the basis for the rules of the game of life in controversy. Everyone has a different concept of good and therefore Mamlakhtiyut should be how, given a deep disagreement about the future, it is possible to live together and achieve common goals. However, this should be Mamlakhtiyut in the narrow sense of the word – that does not endeavor to encompass too many shared values. Since Israeli society is so polarized in its values and aspirations – this would mean that one groups supersedes its vision for the future over the other.”

Former MK Tehila Friedman - "We are in an anti-Mamlakhtiyut era and it will get worse before it gets better. If the principle I define Mamlakhtiyut as 'the kingdom (i.e. country) above the sector', the election results are in favor of the sector before the state. We will see more investment in certain sectors. This may bring about a process among secular Israelis, who will view and act as a marginalized sector – even creating cantons, as suggested by Prof. Eugene Kandel."

Adv. Edna Harel Fisher, Research Fellow, Israel Democracy Institute – "The term Mamlakhtiyut brings with it values of liberal democracy that enables the existence of a pluralistic society. The state's duty to create what Prof. Menachem Fish called 'authenticity' is expressed in the characteristics of its state action: the public service must act in a Mamlakhty and non-political manner"

Amichai Danino, Deputy CEO, Invocap Ltd., Research Team Leader, Traditionalism and Mamlakhtiyut, Tikun Movement – In contrast with Prof. Stern, Danino spoke of Mamlakhtiyut – in the broad sense of the term. That is should just be a framework for resolving disputes – but that it should empower the center – and not just the extremes in Israeli society. Danino said that as things stand today, Mamlakhtiyut empowers sectionalism and polarization. The more extreme the voice are – they gain more budgets and rights. If we cherish life – we must reverse this trend. 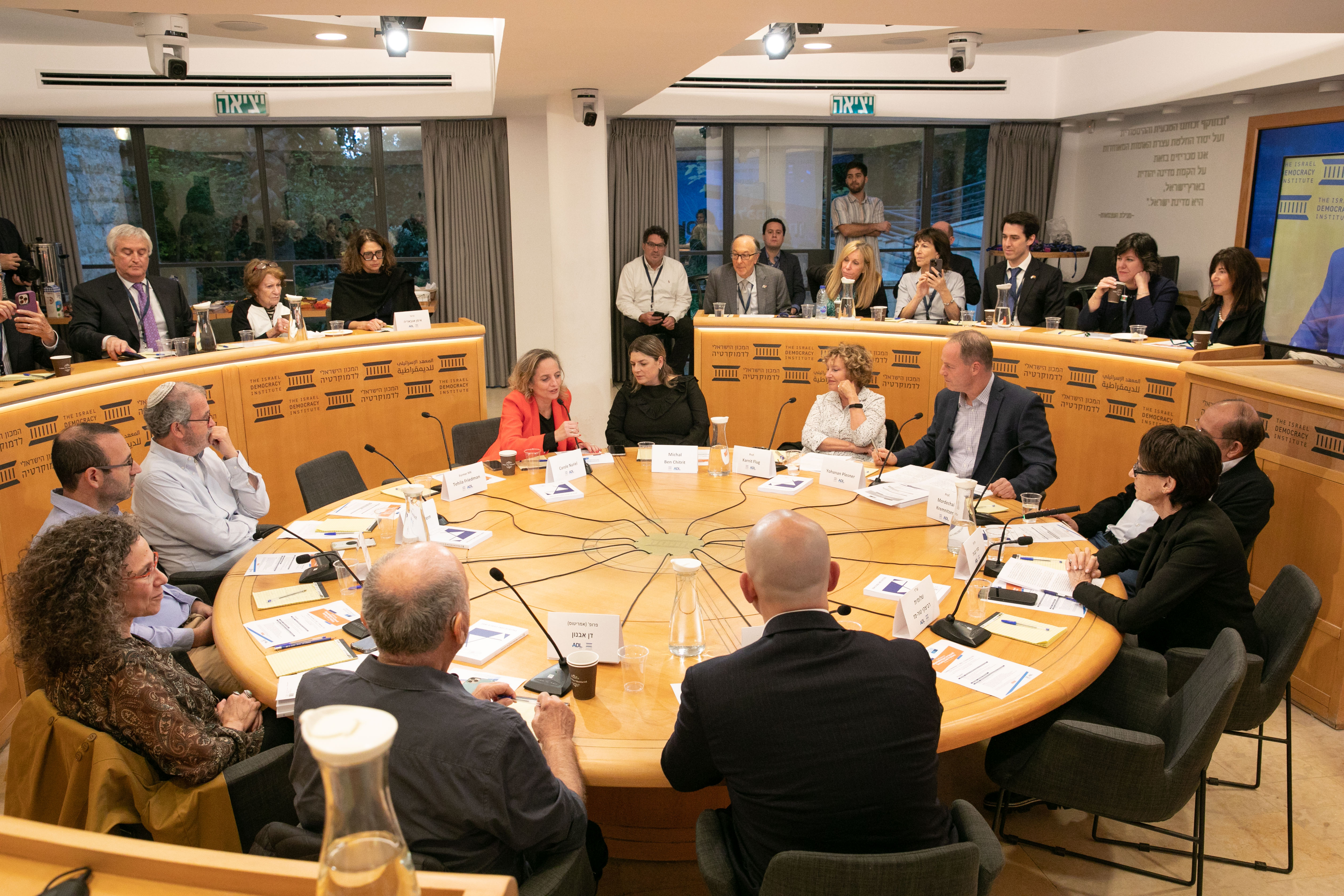 Tags:
Center for Democratic Values and Institutions,
The Joan and Irwin Jacobs Center for Shared Society