The Israel Democracy Institute and the United States Embassy held yesterday (Monday) a special conference presenting the US State Department’s newly released 2018 report on International Religious Freedom. The report addressed both positive developments and areas of concern regarding religious freedom in Israel. Participants included officials from the US Embassy, the Israeli Foreign Ministry, leaders of civil society and academic experts.

Former MK Rachel Azaria: “The ultra-Orthodox monopoly on matters of religion must be broken”

Curtis Ried, Political Officer, US Embassy Jerusalem: “Protecting people’s right to practice religion freely is fundamental for the United States and is the motivation behind the preparation and publication of this annual report on religious freedom”

Curtis Ried, Political Officer, US Embassy Jerusalem: “Protecting people’s right to practice religion freely is fundamental for the United States and is the motivation behind the preparation and publication of this annual report on religious freedom. Many governments and groups around the world deny people their basic freedom of religion. Both the United States and Israel protect people’s right to pray as they please. Protecting this right is a fundamental priority for the United States - therefore we publish this report every year. We showcase US policies to protect religious freedom around the world.”

Dr. Shuki Friedman, Director, Center for Religion, Nation and State at the Israel Democracy Institute: “This comprehensive report is especially significant because it helps those of us who live here and have developed certain blind spots – to be exposed to new perspectives. We see that laws limiting religious freedom in Israel do not necessarily dictate reality. This does not mean that the situation is good. It is getting more and more difficult to pass legislation to protect freedom of religion. The solution is civil action.”

Former MK Rachel Azaria: “There is currently a culture war going on which will determine where Israel is headed in the future. Who we are, and what we stand for. It is not only the Jewish and religious aspects – it will also touch on the Jewish and democratic elements. Historically the problem has been that the country’s leaders have focused on other more pressing matters and have put matters of religion in the hands of the ultra-Orthodox. We must break up this monopoly. We have to break down the dichotomy of the 'tribal' culture in Israel in order to move forward in expanding religious freedom.”

Sheikh Raid Bdir, Southern Islamic Movement: “The recently passed Nation State Law and the Muazeen Bill (which didn’t pass) are harmful to us – and if we didn’t have the Supreme Court to protect us – our situation would be very different.”

Dr. Yizhar Hess, Masorti Movement: "For a year we have not been able to pray in the egalitarian section as we should be able to (after a stone fell and scaffolding was erected). What does it mean that in the egalitarian section of the Kotel – the wall cannot be touched? What would have happened if this would have occurred on the other side of the Kotel? Israel is the only country where Jews do not have freedom of religion – this could not be more absurd.”

Adv. Rabbi Uri Regev, President and CEO, Hiddush: For Freedom of Religion and Equality: “Israel is the only country in the world that does not allow Jews religious freedom. This does not come across in the report. You now have a minority party group saying - I am now the deciding vote and I won’t allow a new government to form until you respect the religious freedom of all Jews in Israel.”

Adv. Avishag Uzrad, Head of Legislation and Public Policy at The Ruth and Emanuel Rackman Center for the Advancement of the Status of Women: “Rabbinical courts are mostly run by men, and sometimes it feels like they were set up for men. Women need representation in the rabbinical courts in order to change the situation. It helps bring about a change from within the system.”

Anat Hoffman, Women of the Wall: “On this 4th of July – Rosh Chodesh Tamuz – I went to the Kotel to pray. After 24 hours of incitement against our group…., buses with protesters along with the Minister of Education protested against us. We were attacked. It is time for the US to do something – not only to report about it. Catastrophe must be prevented. It is no condolence that there are laws that are not upheld. They must be changed. Israel must be modern and democratic, and should lead the Jewish world in pluralism and religious freedom.”

Yair Sheleg, Researcher at the Israel Democracy Institute: “Some cannot accept that there is no separation between religion and state in Israel. From my perspective I am against such separation. In 1962, the Supreme Court acknowledged that in Israel – you cannot differentiate between Jewish nationality and religion. However, there should be separation between religion and the sphere of the individual – including with personal status. Every person has to be free to practice religion freely.” 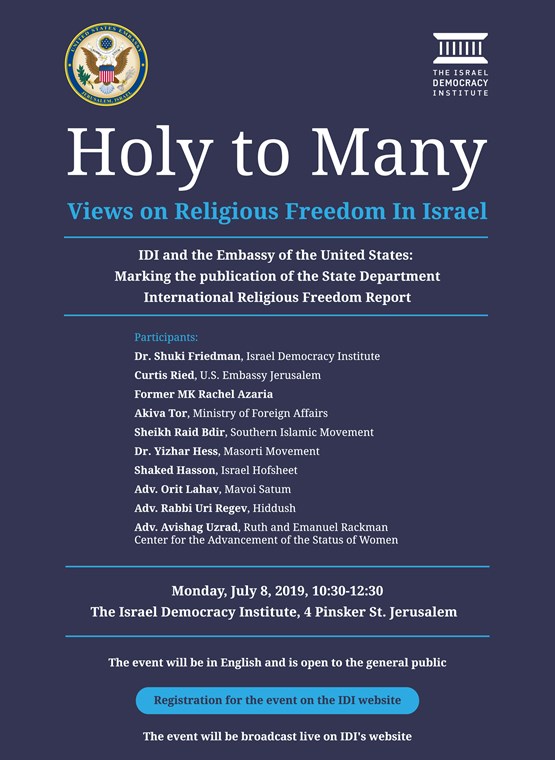