The proposal to establish a Court of Appeal in Israel recently returned to the public agenda. This proposal aims to solve two problems in the existing structure of the Israeli court system:

The proposal currently being considered is to establish an appellate court that will serve as a court of appeals for decisions of district courts, and to reserve the Supreme Court for new, important, or difficult legal questions. According to this proposal, the Supreme Court will continue to serve as the High Court of Justice, and will continue to hear petitions, as it does today.

On Monday, January 31, 2011 IDI convened its George Shultz Roundtable Forum to discuss two main questions surrounding this issue: Is the current proposal an appropriate solution? And what alternatives might there be, if any?

The discussion was introduced by moderator Adv. Dr. David Tadmor, who presented the difficulties that the bill seeks to address, especially the problem of the judges' burdensome workload and the slow processing of files. He said: "The Supreme Court carries an unreasonable load: over 10,000 or 13,000 procedures per year, with about 4,000 major cases. The duration of proceedings concerning a civil case is approximately two years, while other cases are closed after about a year." Adv. Tadmor noted that this situation is one of the principal reasons why there is a need for a court whose judges will deal only with appeals.

Former Supreme Court Justice Eliahu Mazza read out a letter that he had received from Chief Supreme Court Justice Dorit Beinisch a day before the event. In this letter, Justice Beinisch expressed her regret that she was unable to participate in the discussion, but indicated that she wished to explain why she supports the establishment of an appellate court in Israel.

"In the current reality, in light of the heavy workload the Supreme Court faces, the duration of processing files is prolonged and the judges' schedules make it difficult to form the expanded panels of judges that are necessary for clarifying new or complex legal questions. Guiding decisions related to fundamental questions cannot be the product of a panel of a mere three judges. In light of the number of judges and the number of panel sittings, there is a real concern that contradictory decisions may be given by two separate panels of the Supreme Court. "

Justice Beinisch suggested establishing an appellate court that would be superior to the district courts, and that would refer files to the Supreme Court for appeal only in exceptional cases of precedential or public importance. The Supreme Court will thus become an institution that determines judicial policy and focuses primarily on petitions to the High Court of Justice.Retired Supreme Court Justice Dalia Dorner supported the proposal to establish an appellate court, mentioning the heavy workload she had to manage as a judge. In her opinion, the appellate issue is fundamental, since the public in Israel will not be satisfied with one appeal if there is the possibility of appealing to an additional court of appeal above it. She claims that in order to create a significant Supreme Court that deals with 1,000-2,000 cases a year, the right to appeal to the Supreme Court should be limited. Controlling the technical aspect of the legal proceedings will enable the necessary essential change to occur.

Justice Eliahu Mazza said: "I would not remove High Court of Justice cases from the Supreme Court. The direct petition to the highest court has become a part of our social culture-[implying] that  citizens have a voice, that they can directly approach the highest judicial tribune... This has become a very dominant factor in determining public policy in Israel, and cannot be relinquished." However, Judge Mazza noted that not all petitions to the High Court of Justice are deserving of the attention of Supreme Court justices. "Many of the High Court of Justice petitions that are submitted to the Supreme Court are worthless. All sorts of peculiar people have repeatedly filed all sorts of unfounded petitions, such as "why shouldn't I be appointed Prime Minister?"

Adv. Moshe Nissim, a former Knesset Member and former Minister of Justice, raised concerns regarding the solutions offered by the proposed bill for establishing an appellate court. In his view, establishing an appellate court would indeed decrease the workload of the Supreme Court, but not sufficiently. "Possibly 30%, if you do the math. No more than that," he estimated.

"The Supreme Court has brought this heavy workload upon itself", he added. "Today, the right of standing in court is open to all. Each and every person can approach the High Court of Justice. Let all who are hungry come and appeal [a play on words from the Passover Seder]. Gentlemen, as long as the High Court of Justice remains in its current form, there will be no solution....We must reexamine the right of standing, its current scope, and the situation whereby everything is justiciable." In his opinion, a more comprehensive set of solutions should be created, including a wider use of pre-judicial procedures, the establishment of an appellate panel within the district courts, and consideration of the right to appeal and the status of law in society.

Adv. Yehoshua Horesh agreed with the solution of establishing an additional appellate court, and claimed that the Supreme Court should focus chiefly on constitutional issues and on judicial review of Knesset legislation. In his opinion, such a proposal, should it be approved, must be applied gradually and should not, in any case, permit approaching the High Court of Justice as a court of first instance.

Adv. Eyal Rosovsky mentioned that the proposed legislation only seeks to solve the  problem of the workload of the Supreme Court, and does not deal with the workload of other courts at all. In his opinion, part of this burden is linked to the legal culture in Israel as a whole. In order to solve it, comprehensive reform must be considered.

Adv. Danny Eligon agreed with Adv. Eyal Rosovsky and asserted that the current proposal will not solve the workload problem, but will simply transfer it from the Supreme Court to the new court. According to Adv. Eligon, it may be appropriate to consider the proposal that the nine judges who are meant to be assigned to the appellate court operate as a division within the Supreme Court, according to predetermined sub-specializations.

Adv. Asher Axelrod opened his statement by declaring his support for the bill: "I think that the proposed law, as it appears before us, is an excellent and necessary bill," he said. According to Axelrod, the district courts are currently making it difficult for litigants to appeal and are encouraging them to withdraw their petitions for appeal- at times, by threatening to impose the legal expenses of one litigant on the other. Accordingly, said Adv. Axelrod, "An appellate court will be a great relief to litigants. They will feel that their matter is being considered seriously."

Adv. Dan Avi-Yitzhak said that while he had objected to proposals to establish an appellate court in the past, he has changed his mind over the years. The change he seeks is not due to a desire for the Supreme Court to be a lofty institution removed from the nuisance of appeals, but rather to the desire to ease the workload. In his opinion, the workload is heavier in the lower courts than in the higher ones. According to Avi-Yitzhak, cutting off Supreme Court justices from hearing petitions to the High Court of Justice will harm their public status. "I don't want a theoretical court", he said. "The Supreme Court has acquired its status, among other factors, because it has been easy to reach, and has been accessible and open to all. The Supreme Court will lose its public prestige if the right to approach the highest tribunal directly and receive quick relief does not exist. No procedure in an administrative court can compensate for that." He said that if an appellate court is indeed established, the possibility of merging the magistrate's court with the district court should be considered. Otherwise, there will be three courts of appeal above the magistrate's court, instead of the current two.

IDI Vice President Prof. Mordechai Kremnitzer supported the proposed bill and mentioned that the late Prof. Ze'ev Segal was involved in the process of establishing an appellate court. According to Prof. Kremnitzer, if it is indeed decided to establish such a court, the possibility of appointing judges according to professional areas of expertise should be considered: "It is important to ensure the expertise of judges in specific areas, since in many cases, this will be the final instance, and it is therefore important that the court's decisions have both professional and public legitimacy."

IDI Vice President Prof. Yedidia Stern also warned of possible harm to the status of the Supreme Court, but claimed that the Supreme Court itself is responsible to a considerable extent for the heavy burden on its judges. In his opinion, in order to ameliorate this situation, the number of judges and the number of cases should be reduced-not only to lessen the workload, but also because of the Court's status. According to Prof. Stern, the Supreme Court's alarming decline in status is partly related to the fact that it must respond to political events and questions of identity immediately, as they arise in real time. Rather than being able to weigh issues dispassionately, from a distance, after exercising broad discretion, the Court is forced to intervene in matters immediately. In doing so, it becomes involved in active struggles and its power is diminished. According to Prof. Stern, the intense involvement of the Supreme Court in the great debates of Israeli society is not necessary dictated by reality; rather, it stems from two sources: the vacuum that is created by the weakening o f the government and political system, and the hubris of the Court, which sometimes puts itself in the position of being the ultimate decision maker with regard to a variety of issues.

Adv. Dr. Ido Baum claimed: "The proposed model itself is excellent, but does it respond to the workload problem? In my opinion, the answer is no. A redistribution of cases between courts is not a solution. The solution to the problem of the workload is simply to have fewer procedures, and ways must be found to achieve this. In my professional area, that means there should be fewer appeals regarding interim decisions." In his opinion, the accessibility of the Supreme Court has lowered its public status rather than enhanced it.

Adv. Orna Lin also supported the proposal, but expressed reservations regarding an attempt to create professional departments within the courts: "It is very difficult to create internal departments in an institution that needs to operate in a homogenous manner," she said. Adv. Lin suggested that parallel to advancing the proposed bill to establish an appellate court, it is worth promoting a process that would transform the legal system into an autonomous authority. Among its other responsibilities, this authority would be responsible for its internal financial affairs: "If the system is responsible for itself, and has responsibility for all aspects of its functioning, perhaps it will know how better to take care of itself," she explained.

At the conclusion of the discussion, IDI Vice President Prof. Mordechai Kremnitzer said that as a result of the points that were raised by the participants in the roundtable, the Israel Democracy Institute would work on a revised version of the bill. He offered to enlist former Ministers of Justice to support the bill, as a means of promoting it both among the public and in the Knesset. 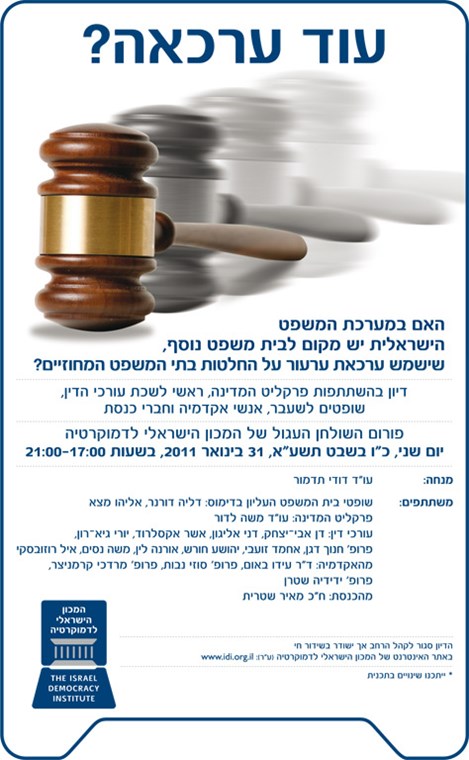