Dr. Carmon, Founding President of IDI, to Step Down After 22 Years

Wednesday, 19 March 2014, Israel Democracy Institute, 4 Pinsker St., Jerusalem – IDI's Board of Directors has voted to approve the recommendation of the search committee headed by Chairman Amir Elstein to appoint Yohanan Plesner as the next President of IDI. 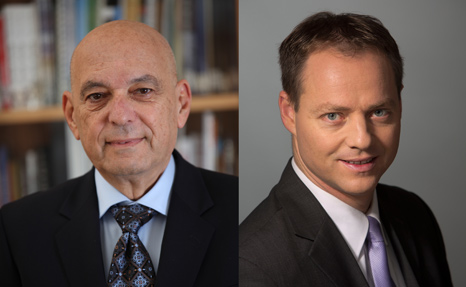 Last year, Dr. Arye Carmon, who founded IDI 22 years ago, announced his decision to step down as President in order to ensure the future of the Institute and pave the way for a new generation of leadership.    The search committee headed by Elstein also included board members Yossi Kucik, Avi Naor, and Prof. Manuel Trajtenberg.  The committee focused on identifying an outstanding leader who could build on the academic strengths of IDI and deepen the organization's impact on Israeli society in collaboration with senior decision makers in the public, business, academic, and political arenas.  After evaluating a number of highly qualified candidates, the committee concluded that Plesner was best qualified to lead IDI and hone its capacity to convert the highest quality research into practicable policy solutions.

Dr. Carmon expressed his confidence that the appointment of Plesner – who served as his personal assistant in the 1990s and observed firsthand the Institute's early growth – will bring both continuity and new energy to the position.  "I brought IDI forward as far as I could.  The appointment of Yohanan Plesner as President is not only a breath of fresh air that promises to reinvigorate IDI, it also signals a generational shift in the leadership of the Institute," said Dr. Carmon.  Dr. Carmon intends to stay on at IDI and focus on research.

Amir Elstein welcomed Plesner's appointment saying, "Yohanan Plesner has a deep understanding of the constitutional and democratic discourse in Israel, which puts him in an excellent position to continue Carmon's work together with the Institute's cadre of leading scholars.  Under Carmon's leadership since its founding in 1991, the Institute has become the most influential body on constitutional and democratic issues in Israel.  The Board of Directors offers its praise and gratitude for Carmon's meaningful contribution to Israeli society, and welcomes his decision to stay on as a Senior Fellow."

Plesner thanked the Board of Directors for the trust they placed in him at such a critical juncture in the organization's history.  "Under Arye's visionary leadership, IDI has become an influential and integral part of public life in Israel – thanks to the outstanding research produced by the Institute's excellent, professional team and the organization's unique ability to identify and advance reforms in the core areas of Israeli society.  I will continue on this path."

Yohanan Plesner was born in England and made aliyah as a child with his family.  Plesner served in the elite IDF special forces unit, Sayeret Matkal.  He earned a BA with distinction in Economics from the Hebrew University of Jerusalem, and an MPA in Political Economy and National Security Studies from the Kennedy School of Government at Harvard University.  Before entering the public sector, Plesner worked as a consultant to major financial corporations in the UK, and then as co-founder and CEO of an international software company.  In 2005-2006, Plesner served as Head of Special Projects in the Prime Minister's Office under Ariel Sharon. He then served as a Member of the Knesset from 2007 through 2013, including distinguished service on the Foreign Affairs and Defense Committee and the Constitution, Law, and Justice Committee. During his tenure in the Knesset, Plesner also served as Co-Chair of the Lobby for Strengthening Higher Education, Chair of the Knesset's Permanent Delegation to the Council of Europe, and Chair of the Israel-Canada Parliamentary Friendship Association.  In 2012, Plesner was appointed by the government to head the Committee on Advancing Equality in Sharing the Burden.  As part of his transition to IDI and in consideration of the Institute's strict policy of non-partisanship, Plesner has announced his intention to resign from Kadima's list for the 19th (current) Knesset as well as from the Kadima party.