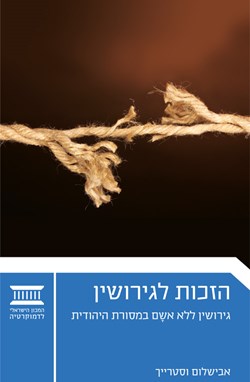 No-Fault Divorce in the Jewish Tradition

When a couple marries according to Jewish religious law but their marriage runs aground, does Jewish law provide them with the tools to separate? Does Jewish tradition support divorce even in the absence of specific, pre-defined grounds? Is no-fault divorce possible under halakha?

Written by Dr. Avishalom Westreich, this volume focuses on couples who have decided to end their marriage, and asks how Jewish tradition can make such moments of tearful separation less painful. It scrutinizes various tools and principles in Jewish tradition that can be employed when a couple feels the need to divorce even without clear grounds for doing so. The tools that it explores are halakhic-legal mechanisms such as compelling a husband to grant a divorce or retroactive nullification of the marriage. The principles that it explores, both theoretical and practical, include ideas proposed in the Jewish legal corpus and those actually implemented over the course of Jewish history.

While the discussion is conducted from the internal Jewish perspective, it also links up to liberal thought and its concept of a right to divorce. The book introduces readers to a broad spectrum of positions and approaches. Some of them justify no-fault divorce and some reject it; some are pragmatic and some ideological; some provide halakhic tools to solve the problem, while others use exegetical interpretations to invalidate those tools. The reader is thus introduced to a fascinating discourse within halakha itself and between halakha and the outside world—a dialogue that links human rights, society, and halakha in an arena relevant to the core of Jewish life and society.

Halakha has legal and exegetical mechanisms that can be used to exercise the right to divorce. It has at its disposal exegetical tools whose purpose is to reconcile its rules—which are generally formal—with principles that are in line with broader values (such as the ethical concept that underlie human rights) and that are also recognized within Jewish law itself. These characteristics find expression in the present topic as well.

Jewish law starts from the position of divorce by mutual agreement (under Torah law, only the husband’s consent is required, but by dint of the ban pronounced by Rabbenu Gershom, ca. 1000 CE, the wife’s consent is required as well) or on specific grounds. This requirement sometimes comes into conflict with the right to divorce. A number of mechanisms are employed to reconcile the right to divorce with the formal halakhic limitations that require both parties (though primarily the husband) to agree to the divorce. The most important of these are: a coerced divorce (kefiyat get) in the case of a no-fault divorce suit (the law of the “rebellious wife”); retroactive annulment of the marriage (hafka’at kiddushin) via legislative action or a judicial act by a rabbinic court; and a prenuptial condition—such as one that mandates divorce in the case of “hatred,” which was widespread in the Land of Israel for centuries. These mechanisms are not purely theoretical. The principle of no-fault divorce was in common use in two important early traditions—that of the Geonim (the rabbinic authorities in Babylonia from the seventh to eleventh centuries) and that of the Land of Israel in the first millennium. The principle has also been applied in other cases down to the present day, although less frequently.

These halakhic conceptions are based on both pragmatic and ideological considerations. The latter reflect a perspective akin to modern liberal thought about the nature of the institution of marriage and the divorce regime that is appropriate for it.

My research shows that prominent currents in halakha recognize the right to divorce and that halakha provides tools for exercising that right. This was so in various traditions in the past and remains the case to some extent today. Hence there is ample room for continuing to employ these principles. The book proposes a practical halakhic model of divorce for cases in which the husband refuses to grant one (sarvanut get) and his wife becomes a chained wife (agunah). The model is based on two halakhic methods—an imposed divorce and annulment of the marriage. The combination of the two creates a halakhic mechanism that addresses the difficulties that would arise from either of them on its own and increases the legitimacy of both paths. But use of this halakhic model requires a priori recognition of its necessity. This recognition can be pragmatic, deriving from social or political considerations of various kinds, but it can also be substantive: adoption of the perspective that there is a right to divorce when there remains no hope that the marriage can survive. I maintain that halakha gives us tools to exercise this right, that these tools were employed in the past, and that they should be adopted in the present as well.