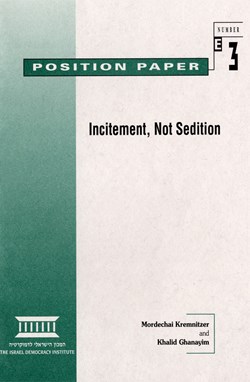 Chapter Two: The Need to Re-examine the Existing Law

Chapter Three: The Need to Abolish the Existing Law

Chapter Six: Infringement of Basic Individual Rights Based on Apprehension and Danger

Chapter Seven: The Constitutionality of the Criminal Offense in Relation to Free Speech

This paper originated as a joint undertaking of the Israel Democracy Institute and the Ministry of Justice to examine offenses related to sedition in the Penal Code of the State of Israel with a view to conforming Israeli legislation to Basic Law: Human Dignity and Liberty.The task was nearly complete when Prime Minister Yitzhak Rabin was assassinated, and the first working paper was submitted by Professor Mordechai Kremnitzer to Minister of Justice David Libaitwo months later.

The assassination of Prime Minister Yitzhak Rabin on 4 November 1995 put an end to the prevailing assumption that Israeli society was immune to political violence and shook public confidence in the resilience of Israeli democracy.It was also preceded by unprecedented acts of public incitement. Yet prior to that assassination, politicians had adopted a conciliatory approach towards such activity, and law enforcement agencies had failed to adjust their policies and institute criminal proceedings against politically motivated public incitement.This failure could be attributed largely to the overly broad, anti-democratic definition of the offense of sedition, as well as to the fear that sedition-based prosecutions could result in trials turning into public forums for inciters.

Primarily, this restraint on the part of the State Prosecutor was due to the special status of freedom of expression and the desire not to stifle political dialogue.This approach was reversed after the assassination, bringing a torrent of criminal investigations, even where no legal action was warranted.This reflected a pervading sense of danger and exposed the inadequacy of the legal system, specifically the overly broad definition of the offense of sedition and the accompanying possibility of improper enforcement.Many regarded the assassination as a direct, or indirect, result of the public incitement that preceded it and felt that timely action against the inciters might have prevented the tragedy.While the truth of this view cannot be verified, its prevalence provides an added incentive for evaluating the current legal situation.

In this position paper, we address the offense of sedition de lege lata, point out the faults and shortcomings of its definition, and propose a lege ferenda to the offense of public incitement with reference to comparative law. In formulating the lege ferenda, freedom of speech and expression will be given the appropriate consideration, and we will focus upon the balance of competing interests of freedom of speech and the social interests protected by its curtailment.Our point of departure is that freedom of expression is a fundamental tenet of democracy and one of the most basic and important rights of the individual for the formulation of opinions and personal development.Furthermore, free speech is the primary tool of those not represented in the political arena who oppose government policies.Even so, freedom of speech is not an absolute right, and its limitation may be justified in order to secure important social aims.