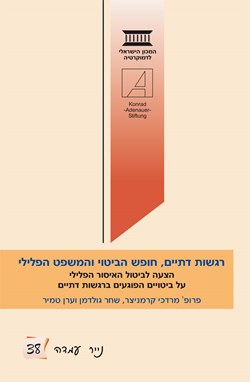 Article 173 of the Penal Law imposes a prohibition against offending religious sensibilities through speech. Is this prohibition – in its present form and from a theoretical standpoint – appropriate and justified?

This essay deals with a certain aspect of a person's "religious interests. "The discussion focuses on examining the justification for the existence of a criminal prohibition against the freedom to express words that harm, or that have the potential to harm, a person's religious sensitivities and religious belief. In other words, it bans publishing statements "that have the ability to cause crude injury to the religious belief or sensitivities of others" and on vocal expression ("…word or voice …") in public and "within earshot of a person" that "can inflict crude injury to his religious faith or sensitivities. "In general, criminal law deals little with the areas of sensitivities and feelings, whether pertaining to enforcing limitations on a person's freedom, e.g. imposing prohibitions on thought, feeling or sensitivity, or pertaining to preventing forms of physical behavior, all of whose influence is expressed in a person's area of private consciousness – his thoughts, feelings and sensitivities.

The lack of desire to involve criminal law in the individual's private, inner space is in keeping with the fundamental principles underlying criminal law. As is known, the role of penal law in a democratic regime centers on creating a platform for individuals to live together that emphasizes the individual's liberty within the social context. Thus, a necessary reason for justifying the imposition of a criminal prohibition must be a need to limit behavior that endangers the basis of common societal existence, e.g. at least that which harms the interests of another. By their nature, thoughts and feelings are intangible and are clearly private in nature; they do not assume any external form, they have no social dimension, and they pose no risk at a level that would justify their limitation. Individual freedom does not sit well with a system of enforcement that seeks to interfere in a person's private space, especially not in the clearest and most intimate sense – the world of his consciousness and emotion. Moreover, such an approach will easily be shown to be clearly ineffective.

A different and more complex issue concerns whether there is room to involve criminal law in limiting behaviors that have a clearly tangible expression, physical or verbal, but whose influence is in a person's most private, intimate space, deep within his emotional consciousness.Simply put, can the principles of criminal law justify limiting behaviors in which the interests harmed by them are intangible and, in effect, all that is caused as a result of them is expressed in influencing a person's inner soul – his feelings, sensitivities, thoughts? It is worth clarifying here that the very act of arousing strong, emotional activity as a result of harming a person's interest that society has recognized as an essential value worthy of protection by criminal law is an expected and natural activity, and one that is practically necessary under the circumstances. However, it is natural to consider that a person who has suffered damage to his property, not to mention to his person and to his freedom, will experience an intense, emotional sensation in light of the damaging incident and its implications. What concerns us here is whether it is possible to recognize the emotional arousal in and of itself, as being an essential social value to an extent justifying harnessing the penal law to its defense – e.g. to impose a prohibition against the behavior that causes it. Of course, an assessment needs to be done of the opposing interest that must be limited in order to prevent the harm to religious sensitivities. Regarding our matter, this refers to limiting a person's fundamental right to freedom of expression for the usually strong reasons that support permitting it. Therefore, even if the conclusion is reached that an emotional interest is essential to an extent justifying being protected by criminal law as a rule, the need will arise to assess the degree of the justification, in light of the reasons that, in the normal state of affairs, justify the existence of as great a degree of unlimited freedom of expression as possible.

In our opinion, there is no room in penal law for an offense that deals with a general protection of a religious person's religious sensitivities and belief.

In light of conclusion supporting revoking the criminal offense, we will have to make certain that, in the wake of the revocation, harm is not caused to other vital interests, some of which are currently covered through this offense. For example, sometimes there is a need to grant protection, in certain clearly defined cases, to freedom of religion and worship, or to exercising the right to culture. It also appears that room exists for amending the definition of "racism" in the penal code, such that incitement against the backdrop of religious affiliation would be considered incitement to racism. In addition, we believe that consideration should be given to whether there is room for imposing a prohibition that would focus on limiting harmful expressions that endanger the public welfare. In this connection, it should be recalled that a convincing justification is required, especially in order to impose a limitation on exercising freedom of expression, due to the danger that by doing so a person would be encouraged to commit an act of violence or other illegal action. Further to the discussion dealing with interest regarding the public welfare, consideration can be given to establishing a prohibition against provoking violence, which would relate to provocative expressions that are liable to cause acts of violence emanating from an angry mob whose sensitivities have been harmed.