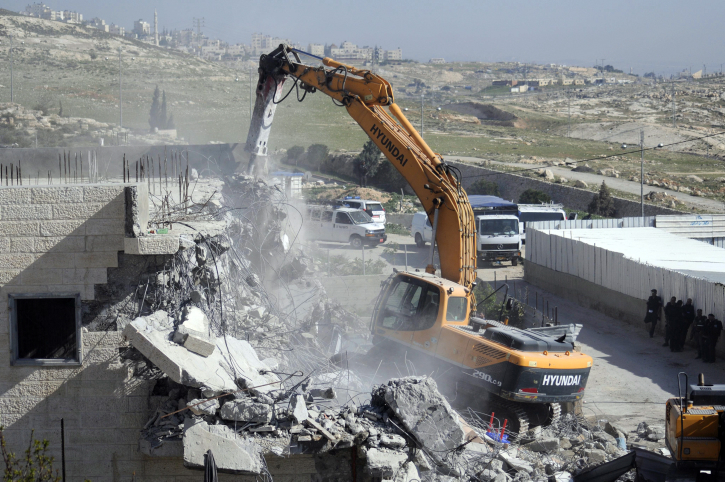 A single sentence and a photo of bulldozers on their way to demolish 11 buildings in Kalansua were proudly displayed on Prime Minister Benjamin Netanyahu’s Facebook page. Last week this post, and of course what it describes, engaged all of Arab society. “I am not deterred by the criticism and as I have instructed, we are continuing to implement equal enforcement in Israel,” wrote the prime minister of Israel.

According to data published recently by Prof. Yousuf Jabareen of the Technion Israel Institute of Technology, about half a million Arab citizens in Israel live in about 100,000 buildings erected without permits in Arab locales throughout the country. Despite local attempts at regularization, which succeed to a greater or lesser degree, and the start of planning of multi-story construction in some of the locales, the situation is not changing and most Arab young people have no real possibility of building a roof over their heads. There are hardly any new master plans for Arab locales, in Jewish locales they aren’t selling homes to Arabs and in any case those locales lack the infrastructures suited to the needs of Arab society, like education services in Arabic. And, as is the case among Jews, the young people in Arab society want to live close to their parents. That is the situation.

However, instead of accepting the Arab local authorities’ proposal for a dialogue and the preparation of a comprehensive joint strategic plan for permitting construction in the Arab locales, the government is continuing to destroy and there is no solution on the horizon. This, of course, has extensive effects on the alienation of Arab society in Israel from the state, its institutions and the regime.

All the complexity and volatility did not prevent the prime minister from uploading this malicious, sharp and succinct post with the picture of the bulldozers, and from boasting about the measure in a transparent attempt to transform this destruction into a kind of retribution for the expected demolishing of homes in Amona. This is the shedding of any kind of nonpartisanship by the person who is supposed to be everyone’s prime minister. Yes, the Arabs’ prime minister too.

The post was directed at the electorate and aimed at creating equivalence between enforcement in Arab society and enforcement in the territories, and especially in Amona, but the prime minister was not interested in the substantive differences between the two cases. The fact that the homes in Amona were built on private land belonging to Palestinians whose property was stolen, while in Kalansua the homes that were demolished belonged to inhabitants who built them on their own land though without a building permit, did not concern him at all.

One can also guess that he will not publish a schadenfreude post if and when the homes in Amona are demolished, and rightly so. With all the opposition to the stealing of land in Amona, I would not want to see Joint List chairman MK Ayman Odeh upload a schadenfreude post about pictures of children being evacuated from their homes.

The prime minister’s text is cynical and hurtful, and even though it hardly made waves among Jewish Israelis, it has deeply hurt the feelings of hundreds of thousands of Arabs. This post has made me afraid of the future. Until now, whenever there was criticism of the government – whether during the period of the election, after the terror attack on Dizengoff Street in Tel Aviv or during the wave of fires – the prime minister directed his own barbs of criticism at the most weakened population in the country. If that was the case then, it is very scary to imagine what he is capable of doing to the Arab population in Israel if the current investigations in which he is implicated develop.

Despite the increasing despair and the alienation, it is still not too late. If the prime minister truly wants to do right by the population in Israel and work with it, rather than on its back, he must announce a wide-ranging project to expand the Arab locales and allow for permitted construction in them. This must include retrospectively recognizing the legality of houses built on private land that belongs to the inhabitants though without permits, expanding the master plans, adapting them to the real needs of Arab society and finding a fitting solution to the distress of the Bedouin citizens in the south. It also wouldn’t hurt to build some new Arab communities and incentivize mixed cities to provide suitable services for both populations.

I am certain that deep down, if we clear away the political pressures and the strategists who are whispering in his ear, Netanyahu too understands that this is the right and moral step.

The author is head of the Arab-Jewish relations program at the Israel Democracy Institute.

This article originally appeared in Haaretz.