Is this a historic year for female representation in world politics?

Hillary Clinton failed to become the first female President of the United States. In Brazil and South Korea, corruption scandals drove women from their respective countries' presidencies. However, three of Europe's most powerful nations are today being led by women: Angela Merkel (Germany), Theresa May (UK) and Beata Szydlo (Poland). Furthermore, women were elected for the first time to lead Taiwan and Myanmar. Today, a total of 18 countries are led by women.

The data below is current as of December 2016. In countries where there are two houses of parliament, the data refers to the lower house.

In June 2016, after his appointment as defense minister, Avigdor Lieberman (lsrael Beiteinu) resigned as a member of Knesset and was replaced by Julia Malinowski. Her swearing in as an MK pushed the number of female parliamentarians to 33, yet another record in a series of milestones related to female representation in Israel over the last few years.

There has been a substantial increase in the amount of women serving as MKs since 1999.

During the 2015 elections, a record number of 29 women were voted into office. Currently, over a quarter of the total number of Knesset members are female. The political party with the highest number of women in the Knesset is the Zionist Union: nine out of its 24 parliamentary representatives. Meanwhile, the Likud Party currently includes seven women out of a total of 30, the Kulanu party has four women serving as MKs out of 10, and Yesh Atid is comprised of three female representatives out of 11 total parliamentarians.

Meretz is the only political party comprised of a female parliamentary majority – three out of five. By contrast, two parties, Shas and United Torah Judaism, banned women from even running for the Knesset.

A comparison of the rate of female representation in the Knesset with the parliaments of other OECD countries shows that as of December 2016, Israel is ranked 20 out of 35. The average female representation rate in OECD countries has gradually but continuously increased. The gap between the number of women parliamentarians in Israel and the OECD average is beginning to narrow.

Rate of Female Representation in Parliament, Israel in Comparison to OECD Countries 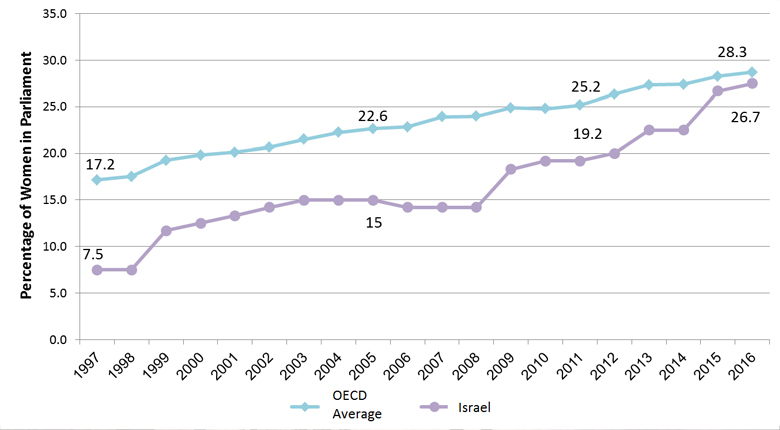 What's the status of women inside Israel's cabinet and municipalities?

In Israel, no more than four women have ever been members of the cabinet (ministers).

The current cabinet was formed with only three women serving as government ministers (Ayelet Shaked, Miri Regev and Gila Gamliel). When Israel Beiteinu joined the government in 2016, Sofa Landver was appointed Minister of Immigrant Absorption. Currently, the amount of women serving as ministers in the Israeli government stands at four out of 23 (17%).

This percentage is relatively low and stands in contrast to the trend in many other democracies, where we see an increasing number of women in government. The current composition of 10 democratic governments based on gender can be seen below. US President Donald Trump's new cabinet stands out for its unusually low representation of women, only two out of 15. In contrast, Sweden's current government is comprised of a female majority. Meanwhile, gender equality has been reached in the governments of Canada and France. 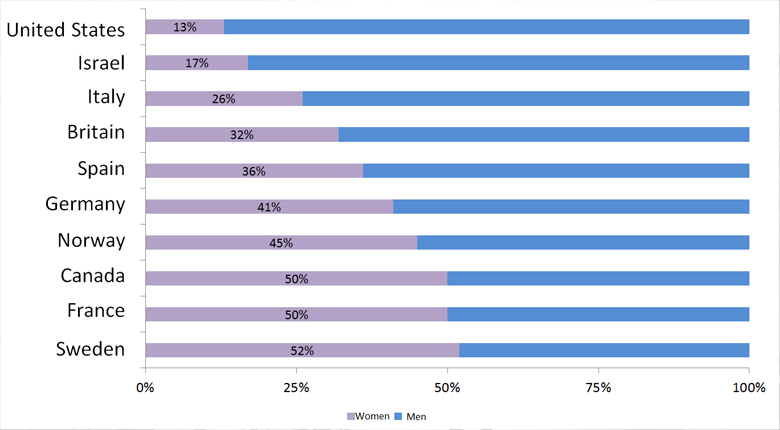 Regarding Israeli municipalities, there was no change (positive or negative) last year in the number of women representatives, and that number remains low.

Of Israel's 40 largest cities, only two women have been elected to serve as mayor since 1989. Both were elected for the first time in the elections of 1998. Since then, Miriam Feirberg has served continuously as Netanya's mayor. Meanwhile, Yael German served as Mayor of Herzliya until early 2013, when she resigned in order to run for the Knesset as a member of the Yesh Atid party.