With only a few days to the Elections, the February Israeli Voice Index finds that Jewish Israelis are Paying Less Attention, while a Majority of Arab Israelis are Following with the Same or Increased Interest. 30% of the Public Predicts a Fourth Election. 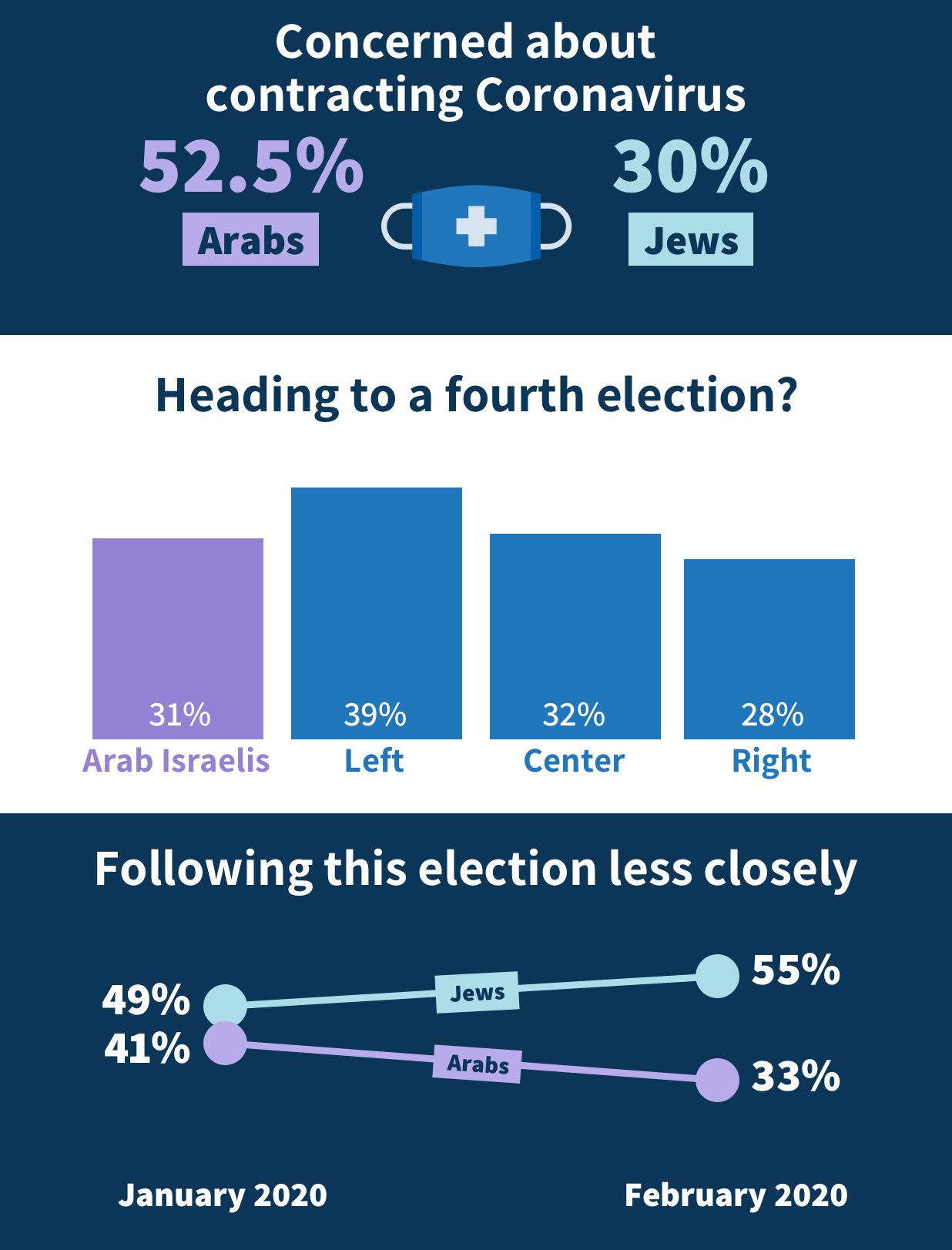 February 27, 2020 – The Israeli Voice Index for February 2020 published today (Thursday) found that 30% of the Israeli public thinks that following Monday’s elections a government will not be formed and the country will instead head to a fourth election. When asked about how the government is handling the coronavirus crisis, the majority of Israelis (60%) responded that the Ministry of Health is dealing with the threat properly.

The Israeli Voice Index is a monthly survey conducted by the Guttman Center for Public Opinion and Policy Research at the Israel Democracy Institute.

What government, in your opinion, has a higher chance of being formed after the elections to the Knesset? (%, entire public)

What do Israelis think will primarily affect the vote? In descending order: Netanyahu's legal troubles (26%), the security situation (20.5%), the cost of living and of housing (14%), the issue of religion and state (9%), the diplomatic process (8.5%), and, finally, Jewish-Arab relations in the country (4%). Notable here is the higher-than-usual rate of those who chose the “Don’t know” option (18%).

As expected, the gaps between the political camps on this issue are very large:

Coronavirus Crisis – the majority of Israelis (60%) thinks that the Ministry of Health is dealing properly with the coronavirus threat.

Probably because Health Minister Litzman is a member of the Haredi Torah Judaism party, the rate of those who think the Health Ministry is dealing properly with the coronavirus threat is highest among the Haredi interviewees (%):

Additionally majority of the public (62%) is not afraid that they themselves or their family members will catch the virus. Nevertheless the data show that in the Arab public the fear of catching the coronavirus is significantly higher than in the Jewish public (53% vs. 30%).

Are you now afraid or not afraid that you or someone in your family will catch the coronavirus? (%, Jews and Arabs)

The survey findings are available on the Israel Democracy Index website.

The Israeli Voice Index is a project of the Guttman Center for Public Opinion and Policy Research of the Israel Democracy Institute. In the survey, which was conducted on the internet and by telephone (to supplement the participation of groups that are not sufficiently represented on the network). The Jewish Israeli sample, which included 610 respondents between February 19-23, 2020, and the Arab-Israeli sample, which included 134 respondents, between February 24-25, 2020, constituting a representative national sample of Israel’s adult population aged 18 and older. The maximum sampling error for the entire sample was 3.7%± at a confidence level of 95%. The fieldwork was done by the Midgam Institute. For the full data file see: https://dataisrael.idi.org.il