Victory in today’s open-ended asymmetric wars is not obtained just on the military front, but must also take into account international legitimization, media perceptions and national resilience, say Ami Ayalon and Eli Bahar of IDI’s Center for National Security and Democracy. 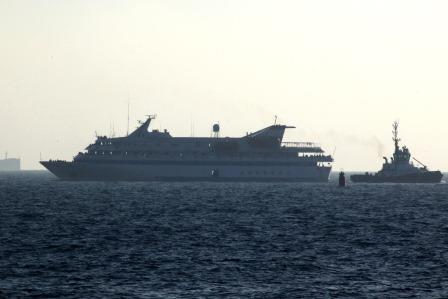 "Ask the chief of staff, 'What is the main restriction on the army today in execution of force?’ and he will tell you it’s this device,” says Admiral (res.) Amihay (Ami) Ayalon, holding up his smartphone.

War, in today’s transparent world, he continues, has become theater, and in many respects it is the viewer who decides who wins.

Ayalon, a former head of the Shin Bet (Israel Security Agency) and a commander-in-chief of the Navy, gives the example of the Mavi Marmara incident in 2010, when Israeli commandos raided a Gaza-bound flotilla and killed nine Turkish activists.

“The side sailing to Gaza knows it is all theater, that it’s not about humanitarian aid. Their biggest achievement is to get killed on the way, to become martyrs. That is the victory of the weak. For the defending side, victory is to stop the flotilla,” says Ayalon, setting the stage for a drama whose end is already known.

“They meet in the middle of the night and what do television audiences see? Civilians with knives and sticks up against commandos armed with the most advanced equipment. There is a clash and civilians are killed. So who wins?” asks Ayalon.

“The commandos say we won, they got nothing into Gaza, but it is the flotilla side that wins because it’s all a show and the viewer decides.”

Stopping the flotilla was a tactical victory, but a strategic defeat, he explains.
We are discussing what constitutes victory in today’s open-ended asymmetric wars, a question Ayalon is tackling as head of IDI’s Shahak Program on National Security and Democracy.The answer is evasive, like the terrorists Ayalon has spent his life fighting. Ayalon and his team, co-led by Prof. Mordechai Kremnitzer, are working on formulating answers to that question and other similar questions faced by liberal democracies in asymmetric combat against non-state actors and terrorist groups, or as the IDI scholars define it, “an ongoing hybrid struggle of variable intensity.”

The aim of the program is to see how a democracy protects its values while fighting a long-term battle against terrorism, explains Eli Bahar, a former Shin Bet (Israel Security Agency) legal adviser, now head of IDI’s Center for National Security and Democracy.

Military means alone cannot provide victory. The days of total war and complete surrender, with a foe cast on the ground awaiting the victor’s judgment and mercy, are long gone. As Bahar puts it, “Modern wars fought by liberal democracies are long struggles without an expiration date.”

Whereas in classical warfare one side would overcome the other and impose a diplomatic solution, today’s wars pit states against organizations, F-16s against suicide bombers and a strategy of victory versus a strategy of standing firm.

It is this open-endedness that poses the greatest challenges to democracy at war. In total war, says Ayalon, the entire state was concerned with one thing, victory. It recruited all its resources, and sacrificed its values for a limited period of time and when victorious would dictate the terms of a future peace.

In long-term conflict, however, a democracy cannot afford for its values to be eroded.

“We can kill the enemy, but if our values degenerate and our economy is left in ruins as a result of boycotts and sanctions, we lose,” says Ayalon.

Contemporary conflict, he explains, must take into account not only the military front, but also different overlapping fronts: the diplomatic front, including the battle for legitimization; the media or public perception front; and the battle over how laws apply, or “lawfare.”

Upholding democracy becomes a factor in ultimately winning a conflict. Speaking of the former Israeli Supreme Court president, Bahar says, “Aharon Barak said that democracies go to war with one hand tied behind their backs, but we win wars because we have one hand behind our back, or because democracy is the only way to maintain our national resilience.”

Resilience and democracy are terms both Bahar and Ayalon bring up repeatedly.

“The only thing that connects Jews and Arabs in Israel is our democratic strength,” says Bahar.

“What keeps the Arabs part of the state is the rules of democracy and their ability to advance themselves in the public arena.”

Ayalon describes democracy as “the most important component of our strength in the in fight against terrorism.”

He talks of three main factors at play: on the civilian front – resilience; on the international front – legitimization; on the military front – deterrence and leverage.

Israel’s resilience is incredible, says Ayalon, and Israeli society has prov¬en many times that it can function impressively for the duration of a long crisis, as it did in Kiryat Shmona under the barrage of Fatah Katyusha rockets and in Sderot under Hamas fire. However, he warns, that resilience is among the Jewish population and the wider national resilience is hanging in the balance.

“When we are fighting Hezbollah, then Israel’s resilience is firm,” he says, “but when it comes to the Palestinians, it is tearing us apart. Because as Jewish resilience strengthens, the Jewish-Arab divide deepens.

“If we do not understand the significance of national resilience in the long term, then in the next war we may find ourselves facing a military threat in the Negev, in Wadi Ara and in the Galilee.”

It is not just the conflict with the Palestinians that is endangering Israel’s national resilience, says Ayalon. It is also attempts to pass legislation that targets its minorities.

“If Israeli democracy continues to behave as it is, if it tries to pass laws that can dismiss Arab members of Knesset not through legal processes and not through the attorney general and the courts; if we exclude groups such as the Northern Branch of the Islamic Movement, which has not resorted to violence; if we harm their right to expression and their right to representation, which are the foundations of democracy, then we do not know when that could result in violence. The trends are deeply disturbing.”

Bahar says that anti-democratic laws not only harm Israel’s internal resilience, they also harm its international legitimization, a crucial component in the struggle for victory.

“On the international front, part of Israel’s strength is that it is still seen as a democracy,” says Bahar.

So when Israeli democracy is weakened by actions such as anti-democratic laws, this damages the way the world sees us and limits our freedom of action and the credit we get. If we erode democracy, we are hit twice: first, in the international legitimization we receive, and secondly, our internal resilience is damaged.

“Israel is fighting two wars at the same time,” he says.

“One is a just war for the establishment and survival of Israel as a Jewish and democratic state in the spirit of the Declaration of Independence, and most of the world accepts this as a just war. The other is a war to expand the eastern border of Israel to prevent the establishment of a Palestinian state. That is seen as an unjust war by the international community.”

Neither Ayalon nor Bahar feel that democracy holds back the military and both agree that paradoxically it is often the generals, inverse of the normal civil-military model, who understand the limits of power and the need to recognize that war is only one, limited, aspect of diplomacy.

“The army has a high degree of operational freedom,” says Bahar.

“I am unaware of real limitations. I would say that in a way we are in a role reversal where the army is more restrained than the politicians who are above it. The IDF’s National Security Analysis, to a point, tells the political echelons, ‘These are the limitations we have to work under.’

“This is the opposite of what you would expect where the army charges forward and the politicians restrain it. Here it is exactly the opposite, which shows us that the army understands the limitations of power for a country like Israel.”

“It is our generals who understand the situation best and they are the most moderate influence in Israeli public policy,” concurs Ayalon.

On the question of whether democracy is a hindrance to the military, Ayalon says, “It is often assumed that democracy is a hurdle on the way to victory, and that you have to abandon democracy to gain victory, but our reality is different. In order to win, we have to strengthen democracy and to use the military as little as possible.

“The army has to be the defense forces of Israel. It must not conquer territory because in the new world, in the new war, conquering territory is a liability, not an asset.”

Ayalon gives the example of the Cold War. The United States, he notes, won the Cold War without firing a single missile against the Soviet Union. It won, he says, by having the right balance between hard power and soft power. What brought down the Berlin Wall in the end weren’t ballistic missiles, but the hammer blows of East German citizens who had enough of the values of the Soviet state and wanted to adopt European values.

“The winning strategy,” says Ayalon, “necessitates understanding diplomatic reality, and thinking not just in terms of conquest and destroying the enemy, but in terms of our quality of life as a Western democracy.”

“You achieve victory when you win on all fronts,” concludes Bahar.

“You have to understand there are two dimensions: results and consequences. Less sophisticated thinking focuses just on the results. Deeper thought also looks at the consequences: What will the impact be? How will I look? How can I influence events?

“Deeper thinking is something that is lacking in Israel; I think we are very focused on results.”

Can the IDI influence public thinking on this matter, can it lead the Israeli public to adopt a broader and deeper set of considerations?

Bahar says that ultimately victory depends on a better public understanding of the way a country needs to fight terrorism, and of how it must maintain its internal cohesion, its international legitimization and its national resilience.

“The ability of a state to survive over time as a democracy with internal cohesion and international legitimization is the key,” he says, “because that is exactly what terrorism seeks to dismantle: the trust between citizens and their government.”