The Israel Democracy Institute and the Department of Zionist Enterprises in the World Zionist Organization held the second day of the annual conference on Zionism and Democracy of the marking the 25th anniversary of Rabin's assassination. The sessions were devoted to the issue of social cohesion in an age of division, incitement and radicalization of discourse. 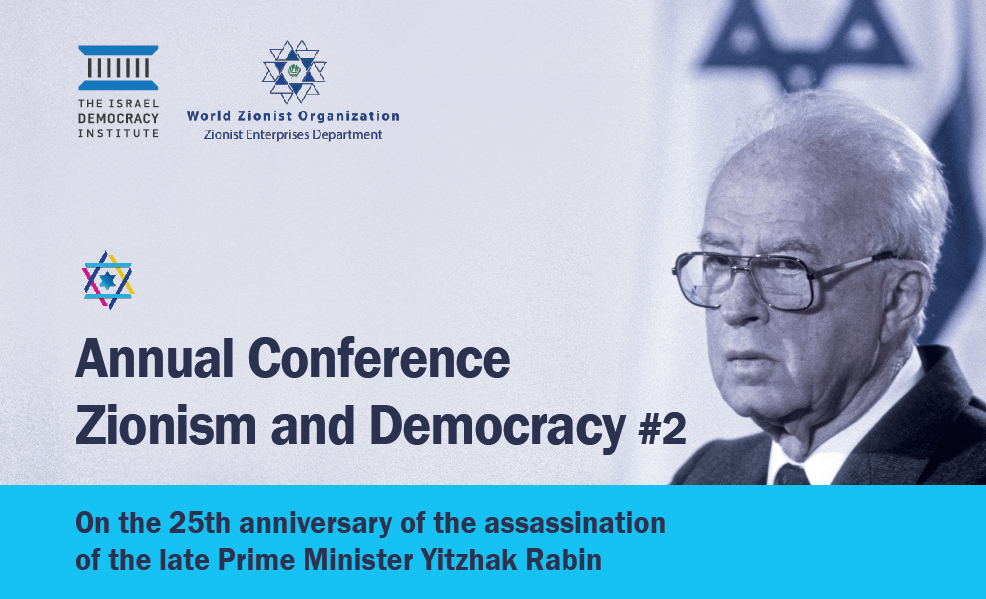 MK Avigdor Liberman, Chairman of Yisrael Beiteinu Party: "It is clear that polarity in Israeli society has never been worse than it is today. This is largely a consequence of the leadership, which instead of restraining public discourse, only stirs it up. This includes the prime minister himself, who provides legitimacy to this type of discourse."

On the ultra-Orthodox society's response to the Coronavirus crisis: "Those who do not respect the values and laws of the State during regular times, do not respect it in times of emergency. Those who do not study the core curriculum, who refuse to serve in the military or national service, those who do not mark Israel's Independence Day – for them it is only natural that even in an emergency, when everyone has to unite, they are not part of the national effort. We see a total weakness of the State in the face of this challenge, and the leaders of the Zionist parties, without exception, behave like rabbits when it comes to the ultra-Orthodox public. This is a country within a country in the full sense of the word.

Until we understand that we need to reach an agreement on, religion and state,' and to form a coalition without Shas and United Torah Judaism for at least two terms, we will not be able to implement fundamental changes. This only harms us as a society in the long run."

MK Tamar Zandberg, Meretz: "There are dozens of cases of physical attacks against protestors. These are not isolated incidents. These are professional officers who hear government ministers and even the Prime Minister, calling the civilian public in times of crisis 'anarchists', 'disease spreaders' and 'virus-infected'."

"The root of the incitement is that the senior leadership, the Prime Minister and ministers, are attacking the citizen. The discourse against Netanyahu is indeed problematic, but there isn’t symmetry between 'extremists on both sides.' Netanyahu provokes very strong opposition and sentiment among those who see his indictments, his cynical style, disparaging and divisive language. There is no parallel of incitement instigated by the leaders in the left camp."

Regarding the possibility of joining a government led by Bennett: "Meretz is a left-wing party and it will not sit in a right-wing government that will lead a right-wing policy on both on economic issues and matters related to corona. If it is an emergency government involving everyone, without disqualification, then Meretz has a role to play in reaching out to the Arab public. Why should it be acceptable that an emergency government focused on corona only includes Jewish parties? There are all kinds of models, and one of them can be an emergency government with all parties represented in the Knesset. The second option can include all parties except the Likud. The third can be a center-left government. The Likud is currently solidly behind Bibi and does not want to replace him."

Outgoing Minister of Tourism, MK Assaf Zamir, Blue and White: "I did not leave Blue and White. There was too much dissonance already, between the intensity of my protesting government policy and the fact that I was a member of the government making the decisions and I had to decide."

"Today we are paying a social and national price for many years of politicization, lack of enforcement and lack of governance - both in ultra-Orthodox and Arab sectors. What does it mean that in a democracy that has a central government, a rabbi announces when he will open religious schools? This is due to the fact that for many years, by turning a blind eye, by consent, for political reasons they let him be the one who calls the shots."

On his political future in the next election: "I am not busy with that now and do not think so far ahead. Elections are something that should always be on the table. We are after three successive elections without conclusive results. Therefore we must soften the lines to establish unity and pass a budget. I hope that in the end common sense will prevail and this government will either change its direction or cease to exist. There is a consensus among 90% of the population that the current situation cannot continue and the ones who pay the price are the citizens."

MK 'Adir Kamal Smells (Yesh Atid-Telem): "I am not waiting for another political assassination to wake us up from the coma we are in. The situation is not good now. The solution is to look for what we have in common. The coronavirus has taught us that plagues and wars do not pass over anyone. We are all equal."

MK Moshe Arbel (Shas): "Messages of social cohesion do not usually produce reactions from people. Incitement, fear and terror do. Recently, I drafted a treaty for mutual respect out of a request to reduce the discourse of hatred and 61 Knesset members have already signed. . It was a bit of a challenge for the Likud, but there were Knesset members who signed from that party as well."

MK Matan Kahana, (Yamina): "The discourse today is inciting hatred. Senior politicians on all sides are busy fanning the flames, encouraging the roots of anarchism and making speeches that are far from unifying. I wish that instead of broadcasting the discourse that takes place in the Knesset plenum, we could instead show the public what is taking place behind the scenes in the Knesset corridors, where we are all friends. The key is for all sides to accept the foundations of democracy and agree that this is the way in which disputes in our nation are decided. We need to encourage a different tone and genuine dialogue."