Israeli Democracy Index 2020 reveals the lowest point in a decade in the public's trust in all public institutions and government officials—particularly in the Knesset and the Supreme Court – as well as major erosion of the public’s sense of social solidarity.

Yohanan Plesner, President of the Israel Democracy Institute, and Prof. Tamar Hermann, Director of IDI's Viterbi Family Center for Public Opinion and Policy Research, today (Monday) presented President Reuven (Ruvi) Rivlin with the Israeli Democracy Index for 2020. The Democracy Index, which is published annually for the past 18 years, reveals a complex picture regarding the level of public confidence in the strength and resilience of Israeli democracy; the degree of trust in State institutions,, and in the Civil Service.

President Reuven Rivlin: “The past two years seem like one endless election campaign, and have dealt a severe blow to Israeli citizens' trust in State institutions and in the courts. There are those who choose to attack the police; there are those who choose to slam the judiciary; and there are those who are angry with me as president; but according to the survey you presented today on public trust in State institutions, the Knesset and political parties rank lowest on public trust. This is the fourth time in two years that the government has fallen and the Knesset has dispersed itself, calling on the people of Israel to go to the polls. It seems that in the war of attrition waged by elected officials against the public, there are no winners. There is only burnout and despair.

There is no doubt in my mind that all candidates running for the Knesset are motivated by the desire to serve the Israeli public. However, when time and time again, these same candidates try to convince us that our system of government is rotten to the core, that the supporters of the opposite parties are crooks, or even traitors-- God forbid-- an abominable accusation that must disappear from public discourse-- they erode our self-confidence and our belief in our ability to work together. This rhetoric is all the more destructive today, at the very time in which we are called upon to display the highest level of social solidarity, and an uncompromising trust in elected officials and the system of government.

I call on all our leadership-- Knesset members, party heads, mayors, and spiritual leaders: If we continue to behave like contentious factions in constant conflict, and perpetuate the rifts among us, we may find ourselves continuing to drag through the political mud that stymies Israeli society from moving forward. Restoring public confidence in the Knesset, in political parties, and in all state institutions, must be at the very top of the agenda of elected officials - not only after the Knesset elections this coming March, but starting tomorrow morning.”

Yohanan Plesner, President of the Israel Democracy Institute: "The findings of this year’s Israeli Democracy Index reflect the depth of our social crisis and the disturbing feelings among the public. These must serve as a wake-up call and a warning sign for decision-makers. The COVID crisis has uncovered, and even contributed to, the deepening splits in Israeli society. In times of security crises in the past, we have always rallied to ensure greater solidarity and mutual understanding among us. But the current crisis has succeeded in shattering our national cohesion. The longer the crisis continues and the more the public feels that it is not being handled properly, our commitment to rallying together and our trust in the institutions of government will be eroded more and more. We can expect this erosion of trust to remain with us even after the election campaigns are over. In the face of the difficult challenges with which all of us must deal, all players in the political arena must take responsibility and act towards uniting the various groups and sectors making up the mosaic of Israeli society. What is at stake is our very ability to move Israel from the low point we find ourselves today, filled with incitement and divisiveness to an era of economic growth, inclusion, rapprochement and accord." 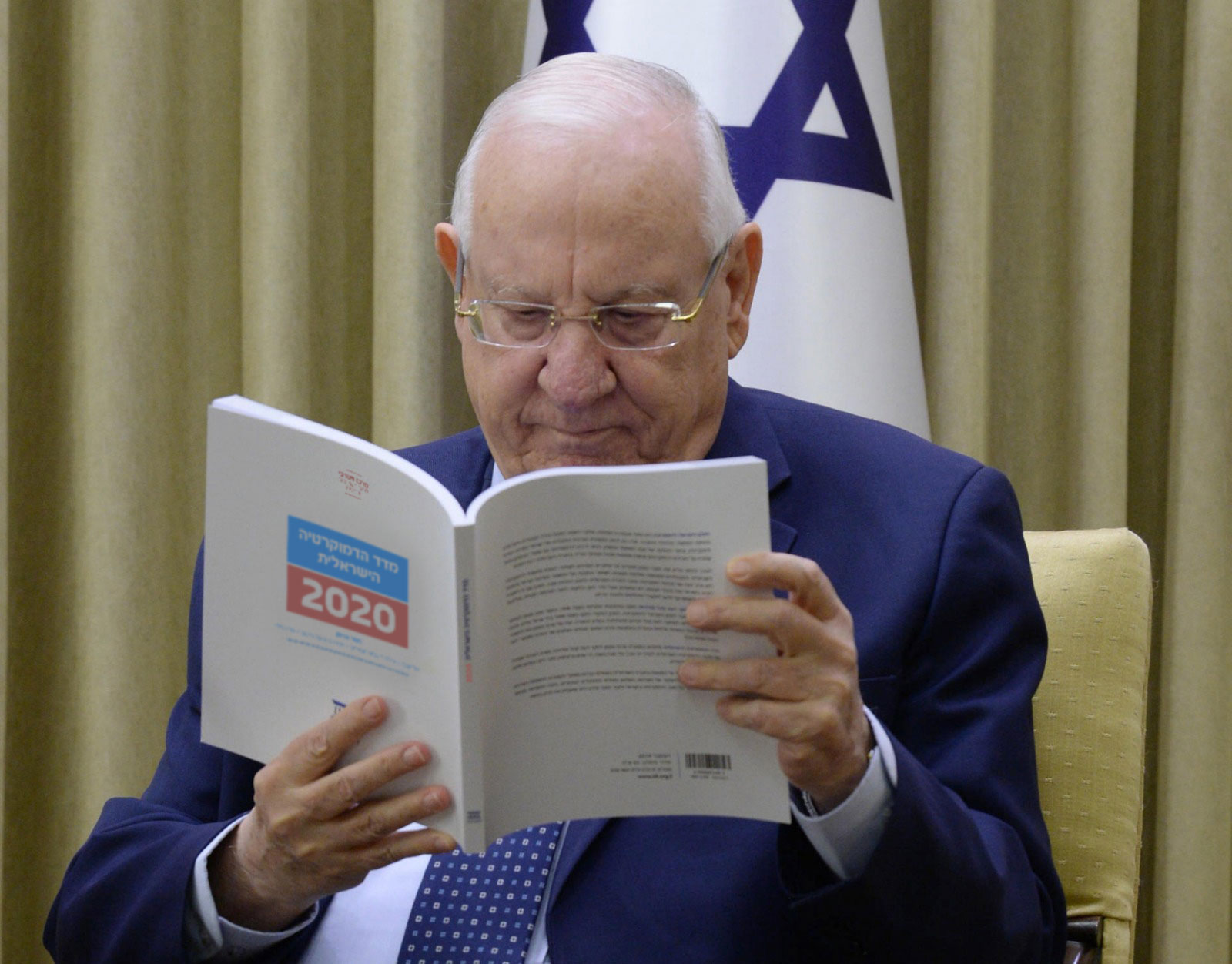 Prof. Tamar Hermann, Director of the Viterbi Family Center for Public Opinion and Policy Research at the Israel Democracy Institute: "We are witnessing a continuous decline in our functioning as a democracy. The erosion of trust in government institutions and in our leadership-- so desperately needed during a crisis-- has accelerated, bringing with it an erosion of the public's assessment of the quality of life in Israel. Against this backdrop, it is particularly noteworthy that in the midst of the most serious health crisis that Israel has ever known, the public expresses a high level of trust and confidence in the health system."

In light of the enormous impact of the coronavirus pandemic on Israeli society, the survey was conducted in June and again in October, to re-examine some of the survey questions and identify trends over time. For these questions, findings from both June and October are presented.

Comparison between June and October data:

Our findings show a sharp decline in trust in most State institutions, compared to in previous years. Public trust in several institutions declined even further between the months of June and October 2020.

Among the Jewish public, the IDF is once again the institution earning the highest level of public trust, though here too we are seeing a significant decline, from 90% in 2019 to 81% in October 2020-- the lowest figure since 2008. Next in line in terms of public trust, is the President of Israel though among Jewish Israelis, trust in the President has fallen steeply, from 71% last year to 63% in June this year, and then to 56% in October.

Among Arab Israelis, trust in state institutions is lower than among Jews, and has dropped significantly relative to previous years. Trust in the Supreme Court, which was shared by a majority of Arab respondents in June (60%), plummeted to 40% in October. Trust in political parties also took a severe blow; after rising to 30% in June from 20% in 2019, it collapsed to just 14% in October. 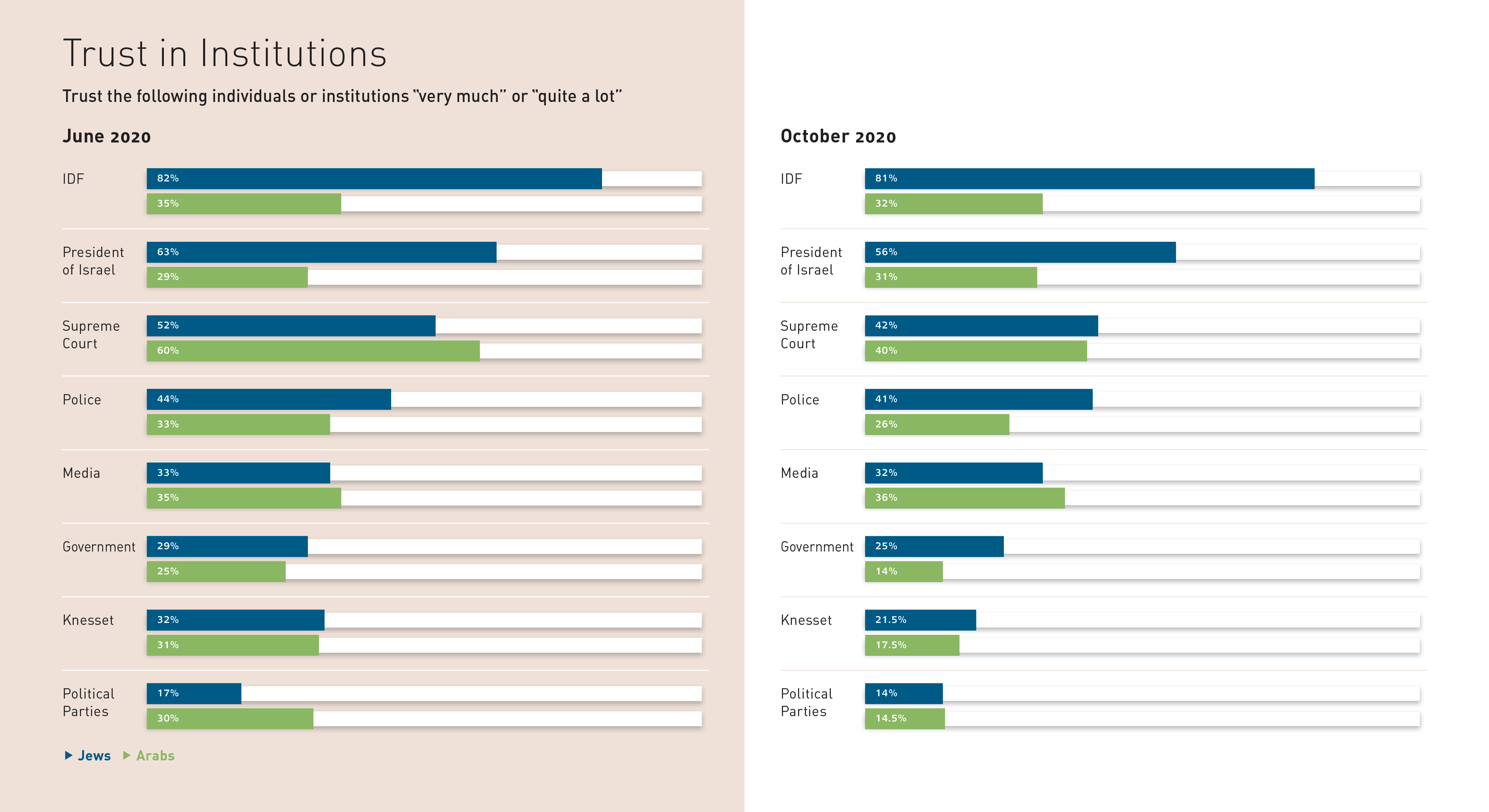 Effect of the pandemic on relations within Israeli society

We examined the impact of the coronavirus pandemic on relations between Haredim and other Jewish Israelis; between Jews and Arabs; the public and the government, and the public and the police. For all, the percentage responding that these relationships deteriorated as a result of the pandemic, was higher in October than in June.

Effect of the pandemic on relations within Israeli society (total sample, %)

By October, the percentage of respondents who felt that there is a significant level of social solidarity in Israel stood at just 17%, the lowest figure in the last decade. This represents a decline by around half, from the all-time high of 33%, recorded in June 2020.

There has been a steep decline in the public's assessment of Israel’s overall situation. While in 2019, around half rated Israel’s situation as "good" or "very good", this fell to 37% by June of this year, and to 32% by October. Nevertheless, in October, some two-thirds of Israelis (64%) reported that Israel is a good place to live (down from 76% in June); and most Israelis (61%) also defined their personal situation as good or very good in June, though this does represent a significant drop from the corresponding figure in 2018, which stood at 80%.

Concern about the Future of Democracy

When asked whether they feel part of the State of Israel and share in its problems, 84.5% of the Jewish sample responded in the affirmative, compared with just 44% of the Arab public.

As in previous years, the majority of the Israeli public believes that the country’s leadership is corrupt. Among Jews, this opinion is far more prevalent on the Left (87.5%) and in the Center (74%), than on the Right (43%).

The 2020 Israel Democracy Index is based on a survey conducted by the Israel Democracy Institute's Viterbi Family Center for Public Opinion and Policy Research. In the survey, which was conducted on the internet and by telephone (to supplement the representation of groups that are not sufficiently represented on the network) from June 5-17, 2020 & October 27-29, 2020.1000 men and women were interviewed in Hebrew and 180 in Arabic, constituting a representative national sample of the entire adult population of Israel aged 18 and older. The maximum sampling error for the entire sample was 2.9%± at a confidence level of 95%. The fieldwork was conducted for the June survey by the Midgam Institute (Jews) and the Stat-net Institute (Arabs) and for the October survey by the Midgam Institute. For the full data file see: Data Israel.