Israeli Democracy Index 2020 reveals sharp decline in assessment of relations between the police and the public since the outbreak of COVID-19. A majority of Israelis believe that the police does not take criticism seriously

Yohanan Plesner, President of the Israel Democracy Institute, and Prof. Tamar Hermann, Director of IDI's Viterbi Family Center for Public Opinion and Policy Research, today (Monday) presented President Reuven (Ruvi) Rivlin with the Israeli Democracy Index for 2020. The Index, which is published annually for the past 18 years, reveals a complex picture of the level of public trust in key State institutions, and of Israelis' confidence in the overall strength and resilience of Israeli democracy.

This year’s Index includes two special chapters, one on the public's assessment of the public health system in Israel and another – presented below – of the Israel Police.

Yohanan Plesner, President of the Israel Democracy Institute: "Among the most urgent tasks facing the next Police Commissioner is the need to repair the significant damage inflicted during the COVID crisis on the relationship between the police and the public. These findings only bring into sharp relief the challenges facing police: to enforce the stringent restrictions imposed by the government on the public in the face of a deepening crisis of confidence. In the absence of a permanently appointed Police Commissioner and in a reality that includes repeated attempts at intervention by the political echelon, improving public trust in the police has become an almost impossible task. The police, who are responsible for law enforcement in Israel, must prove to the public that it is acting in a professional, equitable and fair manner while preserving the appropriate distance between its officers and the political echelon."

Prof. Tamar Herman, Director of the Viterbi Center for the Study of Public Opinion and Policy at the Israel Democracy Institute: "Our findings show that the majority of the public believes that the police are not attentive to criticism, and gives them low grades for their performance on many issues. A conspicuous example of the public's criticism of the police, refers to what is perceived as over-policing, especially against Ethiopian-Israelis. It is time for the police to engage in serious soul-searching."

In light of the enormous impact of the coronavirus pandemic on Israeli society, the survey was conducted in June and again in October, to re-examine some of the survey questions and identify trends over time. On these questions, findings from both June and October are presented.

Comparison between June and October data:

Sharp decline in ratings of relations between the public and the police:

Between June and October there was a worrying surge in the percentage of Israelis who believe that the pandemic has harmed relations between the public and the police, from 47% in June to 84% in October.

How has the pandemic affected relations between the public and the police? (Jewish and Arab sample, %) 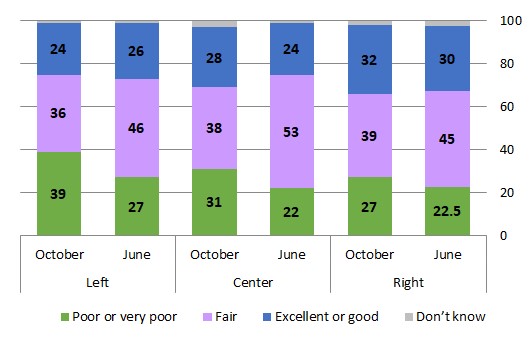 Decline in public trust in the police

Rate police performance in each area as poor or very poor (Jewish and Arab sample, %)

A large majority (69%) of the Israeli public believes that the police invest greater efforts to combat crime in Jewish localities than in Arab ones;. This opinion is held by 82% of Arab, and 67% of Jewish respondents.

Despite strong public criticism of the police, 70% of the survey respondents believe that the police either does not take this criticism seriously at all, or does so only marginally.

Strongly or somewhat agree that each of these groups is over-policed (Jewish and Arab sample, %)

The 2020 Israel Democracy Index is based on a survey conducted by the Israel Democracy Institute's Viterbi Family Center for Public Opinion and Policy Research. In the survey, which was conducted on the internet and by telephone (to supplement the representation of groups that are not sufficiently represented on the network) from June 5-17, 2020 & October 27-29, 2020.1000 men and women were interviewed in Hebrew and 180 in Arabic, constituting a representative national sample of the entire adult population of Israel aged 18 and older. The maximum sampling error for the entire sample was 2.9%± at a confidence level of 95%. The fieldwork was conducted for the June survey by the Midgam Institute (Jews) and the Stat-net Institute (Arabs) and for the October survey by the Midgam Institute. For the full data file see: Data Israel