How will Israelis react to a new tax on sugary drinks? A special IDI survey found that only a quarter of the public said that they would reduce their consumption of such drinks if they are taxed up to half a shekel, but a significant majority said they would limit their consumption if the tax exceeds two shekels. 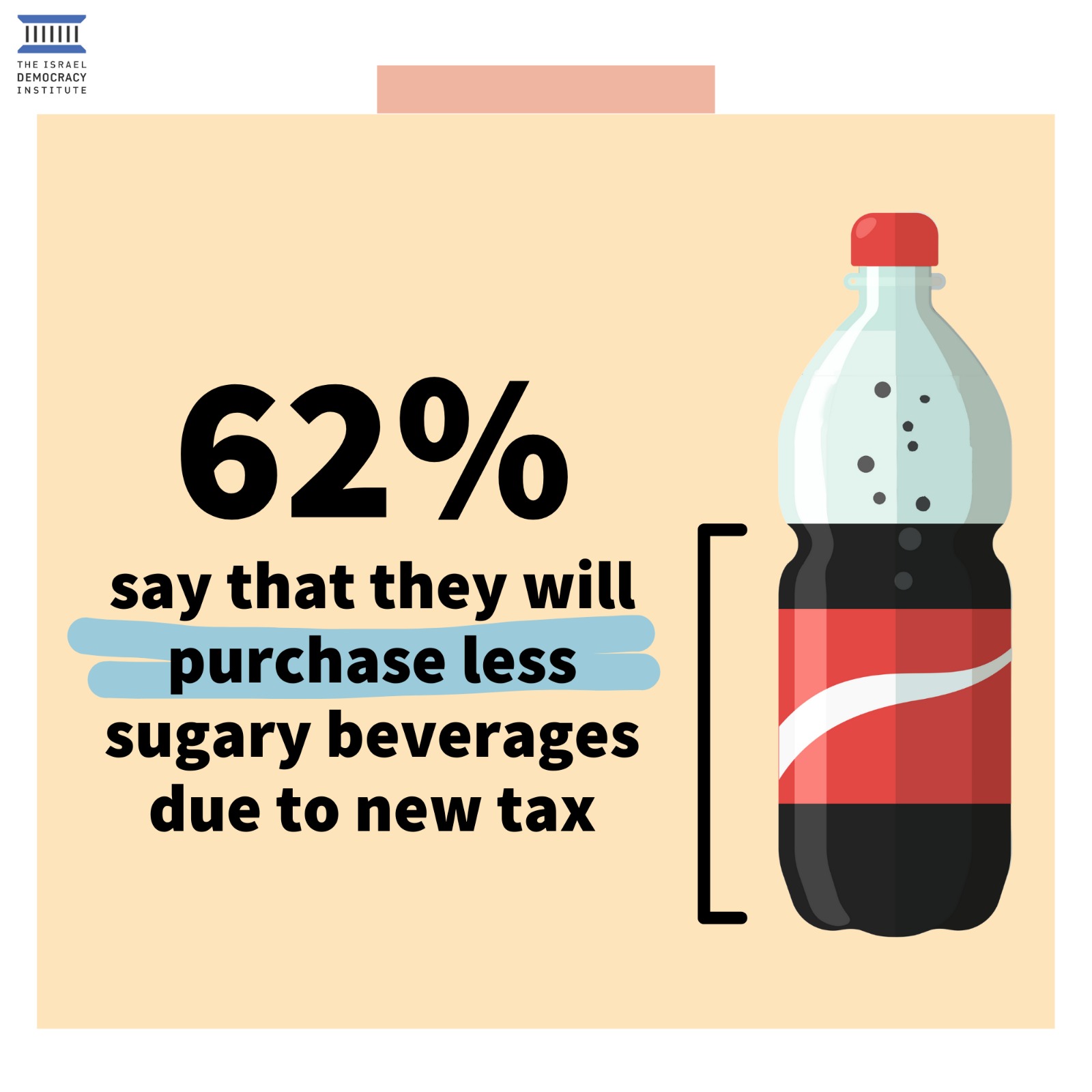 Would a tax on sweetened beverages affect Israeli consumers? More than half of the secular public supports the idea of imposing such a tax, but less than a quarter of the ultra-Orthodox and only a third of the Arabs do. A third of the entire sample would reduce their consumption of sweetened beverages if they were taxed by up to half a shekel, but a significant majority reported that the tax would have to be more than two shekels to affect their habits.

Regarding the tax on sweetened beverages, a new analysis by the Israel Democracy Institute, conducted by Rotem Spiegler and Prof. Yuval Feldman, sheds light on the expected reaction by consumers—which, of course, varies dramatically among different groups in the population.

According to Prof. Yuval Feldman, a senior fellow at the Israel Democracy Institute, an expert in behavioral analysis of the law, and a lecturer at the Bar-Ilan University law school, “Today, behavioral economists understand that in many cases regulation must be differential. In the case of the tax on sweetened beverages and disposable utensils, the policy is uniform, with no adjustments for various sectors and family size. Reducing harmful behaviors without complementary actions—whether education, information campaigns, or other alternatives—is liable merely to increase the cost of living for weaker population groups without producing the desired change in behavior. It is easier for those who are better off to find substitutes, but for them the tax is in any case a smaller bite out of their monthly expenses.”

He adds, “Absurdly enough, precisely what is healthier and better for the environment is more expensive. This is warped and we must change this.”

The Ultra-Orthodox are opposed to a tax on sweetened beverages.

About 40% of the respondents believe that sweetened beverages should be taxed in order to reduce the public’s consumption of sugar; but 54% disagree. Broken down by segments of the Jewish population, more than half of the secular (52%) are in favor of the tax, but less than a quarter (19%) of the ultra-Orthodox.

Households with a below-average income consume a larger quantity of sugary drinks: Among them 13% of Jews and 32% of Arabs consume more than five bottles a week; but only 11% of Jews and 24% of Arabs with a higher income do so. There are also consumption differences that can be attributed to the number of children in the household: the more children there are, the greater the consumption of sweetened beverages. Families that consume more than five bottles a week have an average of 2.9 children, while those that consume five bottles or less, average 2.4 children.

The tax’s impact on consumption. As a follow-up question, the respondents were asked how much they would reduce their consumption at various tax levels. If the tax was no more than half a shekel per bottle, a third of the respondents (32.5%) said they would reduce their consumption; for a tax of up to a shekel, 56% would cut back; and almost two thirds (65%) would do so if the tax went as high as two shekels. An even higher tax would lead almost three-quarters (74%) to drink fewer sweetened beverages.

A breakdown of the Jewish respondents by level of religious observance revealed no significant differences between the ultra-Orthodox and the secular for a tax of no more than half a shekel; not quite a third of these groups (29% and 30%, respectively) said that such a tax would cause them to cut back their consumption of sugary drinks. If the tax was two shekels is or more, similar percentages of the ultra-Orthodox (62%) and the secular (65%) said they would do so.

However, there were major differences between Jews and Arabs: Only 20% of Jews would cut back their consumption of sugary drinks in response to a tax of up to half a shekel; but 30% of Arabs would do the same. With regard to a tax of two shekels or more, figures for Jews and Arabs are very close (69% and 65%, respectively).

Does the tax miss the mark?

To judge by the survey findings, it is unlikely that larger families with lower incomes would reduce their consumption of sweetened beverages as a result of a tax, to the same extent that smaller and better-off families would.

The Israeli Voice Index for August 2021 was prepared by the Viterbi Center for Public Opinion and Policy Research of the Israel Democracy Institute. In the survey, which was conducted on the internet and by telephone (supplements of groups that are not sufficiently represented on the network) from August 23 to 26, 2021, 602 men and women were interviewed in Hebrew and 155 in Arabic, constituting a representative national sample of the entire adult population of Israel aged 18 and older. The maximum sampling error for the entire sample was 3.59%± at a confidence level of 95%. The fieldwork was done by the Midgam Institute. For the full data file see: Data Israel

Tags:
Economy and Governance,
public opinion,
Center for Governance and the Economy