In an article that originally appeared on Haaretz.com on the day of Prime Minister Yitzhak Rabin's yahrzeit, Prof. Yedidia Stern says the political assassination sought to change government policy and prevent the implementation of the Oslo Accords. The assassin used a gun barrel to change the results of the ballot box, seeking to overthrow Israel's decision-making bodies and take over its marketplace of ideas. 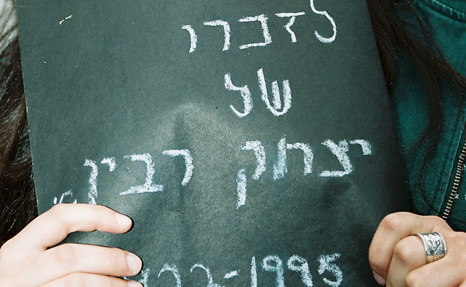 When Yigal Amir murdered Yitzhak Rabin, he did not target Yitzhak Rabin the man; he targeted the prime minister of Israel. This political assassination sought to change government policy and prevent the implementation of the Oslo Accords. The assassin used a gun barrel to change the results of the ballot box, seeking to overthrow Israel's decision-making bodies and take over its marketplace of ideas. The shots targeted the very essence of the sovereign Jewish state; the blood on the pavement was the blood of democracy itself.

The motive for this act was religious. At the time, the state's decision to concede territory as part of a peace agreement was in direct conflict with rabbinic decrees prohibiting territorial concessions. Armed with baseless religious arguments, the murderer sought to substitute the rule of the rabbis for the authority of the sovereign state. His treacherous deed was part of an ongoing religious-cultural war over identity, meaning, and the place of rationality in national decision-making in Israel.

The religious and cultural failure that led to the Rabin assassination continues to threaten Israeli sovereignty and democracy today. Traditional Judaism, which developed in the Diaspora, was not ready for the establishment of the State of Israel. After 70 generations with no political sovereignty, the Jewish people lacked the historical memory, normative solutions, and functioning institutions necessary for the public expression of Judaism in an independent territorial entity. This challenge was intensified when law and politics were combined. Since believers see Jewish law as an inviolable categorical imperative, it unleashes great force and unwavering commitment when invoked. The debate over Israel's borders therefore became radicalized when the possibility of territorial concessions was defined as a question of Jewish law and the subject of halakhic rulings.

Defining foreign policy and security matters as halakhic issues removes them from the realm of democratic decision-making, since some believers—not all of them—see religious commandments as above the here and now, outside of history, and blind to rational and moral considerations. Moreover, invoking the halakhic obligation of "be killed rather than transgress" in the context of foreign policy issues raises associations of historical periods when decrees demanded the violation of fundamental tenets of faith and the Jews were forced to use all means at their disposal to resist. This type of rhetoric moves extremists to take action.

The last twenty years have seen some positive changes. The religious community has cooled its Messianic fervor somewhat and the devastating combination of halakha and politics appears to have been reigned in to some degree. The bulk of the work, however, remains to be done, as Israel's religious leaders are not addressing the religious challenges presented by the fact of a Jewish state. This is evidenced by their attitude towards the Israeli judicial system (dubbed "courts of non-Jews"), their calls for military insubordination, and the fact that halakhic authorities have refrained from developing a body of "Zionist law."

Today's religious Zionist leadership must respond courageously—using sensitive and balanced halakhic language—to the most important development in Jewish life of the last 2,000 years: the Jewish state. As long as we exempt ourselves from this responsibility, as we did when in exile, a dark cloud will sully our sovereign skies and threaten to bring great storms in the future.

A version of this article was published on Haaretz.com on October 25 (the 12th of the Hebrew month of Chesvan), 2015.