Former IDF Chief of Staff Gadi Eisenkot’s decision to join Benny Gantz and Gideon Sa’ar’s new political framework is a part of a long-standing trend in which retired IDF chiefs of staff join the political system. 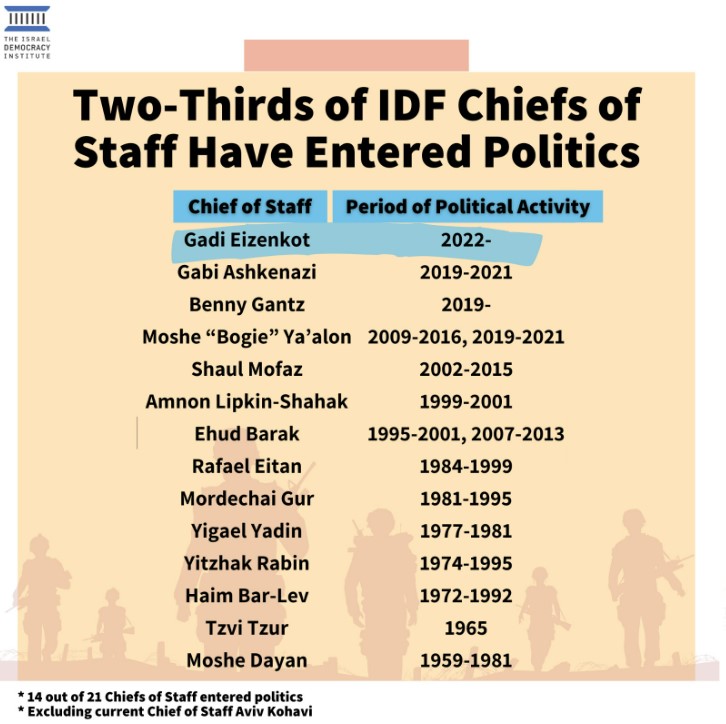 Eisenkot is the fourteenth chief of staff to enter politics – and joins a total of two thirds of the IDF’s former top officer who have to date entered national politics (excluding current Chief of Staff Aviv Kohavi). Two of these figures became prime ministers (Yithak Rabin and Ehud Barak), and six served as ministers of defense (Dayan, Rabin, Barak, Mofaz, Ya’alon and Gantz).

According to recent polls, the next Knesset will include five to six senior generals – Gantz and Eisenkot, alongside Yo’av Galant, Orna Barbivai, Yair Golan and Elazar Stern (if he does not retire from politics). This does not represent a particularly large presence of generals in the political arena compared to the 1980s when four former chiefs of staff served in the Knesset in addition to other former generals.

By contrast, the parliament sworn into office in 2015 had a significantly lower proportion of former senior officers with only one chief of staff and two generals elected to that Knesset. There are a number of possible explanations for the relative decrease in the presence of former senior officers in the political arena. One possibility is that today there are no more “glorified generals” who are idolized by the public. With the absence of large military campaigns, the glory that surrounded generals in the past has subsided and thus lowered their political “market value.” The relatively long cooling-off period (three years), mandated by law for retiring senior officer over the past decade, further disincentivized a quick move from the military to a political career.

A second possible explanation for the decrease in political presence of military officers could be due to the lack of attractiveness of the political system. The decline of the Knesset’s status in the eyes of the public, the shallowing and polarization of political debate, and the price politicians pay for the loss of privacy (which increased dramatically with the rise of social media) might explain why a growing number of former officers would prefer to turn to the private sector or work in civil society out of the belief that these will offer them more serious challenges.

Eisenkot chose to join a political platform positioned in the center of the political divide. This decision is not unusual: Eleven of the fourteen chiefs of staff who entered politics, chose to join either Center or Left-leaning parties. The exceptions were Rafael Eitan (Tzomet party), Shaul Mofaz and Moshe “Bogie” Ya’alon (they first joined the Likud party but moderated their political orientation over time). Other generals who decided to participate in electoral politics joined parties on the Center or Left parties as well. On the other hand, a number of former senior officers – such as Ariel Sharon, Rehavam Ze’evi, Ezer Weizman, Yitzhak Mordechai, Effie Eitam, Yossi Peled and Yo’av Galant – did choose to join more right-leaning parties over the years.

Tags:
Elections 2022,
Political Reform,
Center for Governance and the Economy