During the summer of 2010, Jews in both Israel and the Diaspora voiced their concern regarding the Rotem bill, the controversial conversion legislation approved by the Knesset’s Constitution, Law, and Justice Committee. In this op-ed article, originally published in The Jerusalem Post on September 6, 2010, IDI Vice President Prof. Yedidia Z. Stern issues an urgent plea for Jews of all denominations to come together to help solve Israel's conversion crisis in order to avoid the "social time bomb on our doorstep." 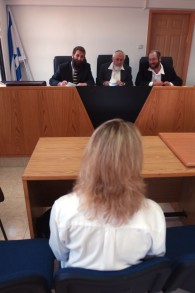 The question of who should perform conversions in Israel is critical, both symbolically and practically. Symbolically, conversion is the only way to join the Jewish people; accordingly, whoever is authorized to convert people serves as a gatekeeper, with a monopoly on determining membership in an exclusive club. Practically, the gatekeeper's decisions have a profound impact on the identity of potential converts, Israel-Diaspora relations, the relationship between religion and state, and the character of the Jewish collective.

Astonishingly, while most Jews in our generation do not regard religion as the substance of Judaism—instead understanding Judaism as a nation, people or civilization—there is almost complete agreement that a religious process is necessary for joining the Jewish collective. It is therefore no wonder that rabbis are considered the natural gatekeepers.

But which rabbis? The sad fact is that the Zionist majority here in Israel has forged an unholy alliance with the partially a-Zionist, Haredi minority. Under the terms of this alliance, the Haredim support the coalition on major public issues, and in return control matters of religion, including conversion. The keys for entrance into the Jewish people have thus been given to people who interpret Jewish law in a way that almost precludes opening the gates.

The current situation demands immediate change. More than 300,000 immigrants have become citizens of Israel under the Law of Return but are not Jews according to Jewish law. Locking the gates of conversion to them has planted a social time bomb on our doorstep.

First, since Israeli law does not allow non-Jews to marry Jews, non-Jewish immigrants are excluded from marrying some 75 percent of the population—a serious violation of their human rights.

Second, if immigrants bypass the marriage law and find ways to marry Jews, it will lead to mass assimilation. Although most Israelis vehemently oppose assimilation, unless there is a "friendly" conversion process, there is a very real possibility that the grandchildren of many Israelis—including Orthodox rabbis—will not be recognized as Jews according to halakha and Israeli law.

Third, assimilation in Israel may prompt Orthodox and traditional Jews to create family registries that will split the Jewish people into groups that will not marry each other. Existing tensions between religious and secular Jews will pale in comparison to those engendered by such a development.

Lastly, discrimination against non-Jewish immigrants may induce deep feelings of alienation, creating a national subgroup that is neither Jewish nor Arab, with unpredictable consequences.

What can be done? The Knesset has proposed the Rotem bill as a solution. This is a bad proposal because it gives the Chief Rabbinate exclusive authority over conversion. This will only exacerbate the problem, since the Chief Rabbinate is controlled by Haredim. This basic fact nullifies any merits of the Rotem bill, which has elicited outcries not only in the Diaspora, but also among Orthodox Jews—including rabbis—here in Israel.

The alternative—recognizing non-Orthodox conversions conducted in Israel—is not currently viable due to the country's demographics. While the Knesset has more than 25 Orthodox members, it has no significant representation of non-Orthodox denominations. Lacking political power, Reform and Conservative Jews have appealed to the courts, demanding that their conversions be recognized based on the principle of equality. Even if the court rules in their favor, however, the Knesset is likely to attempt to overturn the ruling.

It is no wonder that non-Orthodox Jews are angry and disappointed by their exclusion from responsibility for conversion. Nevertheless, as concerned Jews who care deeply about the State of Israel, they should understand that Israel must take immediate action to resolve the real, urgent, and acute need to convert immigrants from the former Soviet Union. While it is imperative to formulate a vision for the future that will resolve the major disputes—for example, by finding a common denominator for conversion that is approved by the three major Jewish denominations—we cannot delay defusing this social time bomb.

The Zionist majority, both here in Israel and in the Diaspora, must demand that authority for conversion be transferred from stringent, Haredi rabbis to moderate rabbis willing to implement a halakhic approach that embraces converts. A lenient policy is justified today because Jewish identity is guaranteed in Israel; Jews are the vast majority and the public domain is Jewish, eliminating concern that too many converts might endanger it. We are not a minority anymore, and halakhic policy should reflect this crucial change.

Moreover, potential converts are sociologically Jews even before converting. Already connected to Jewish life, they serve in the army, speak Hebrew and identify with the words of "Hatikva" when they sing it.

Lastly, the vast majority of candidates for conversion are "from the seed of Israel"; that is, they are of Jewish descent, even if their mothers are not Jewish. These considerations should motivate the adoption of a more open and welcoming conversion policy.

Struggling against Haredi gatekeeping is not easy. Without support from a Zionist coalition that includes secular, traditional, Reform, Conservative and religious Zionist Jews, this struggle cannot succeed. There is a need for restrained action—a solution that the Knesset can approve, but that will not damage the symbolic legitimacy and practical ability of non-Orthodox movements to promote their interests and viewpoints. Since the Rotem bill does not meet this criterion, it must be rejected.

Prof. Yedidia Z. Stern is Vice President of Research at the Israel Democracy Institute and a professor of law at Bar-Ilan University.

This article was first published in The Jerusalem Post on September 6, 2010 and has been reprinted with permission.