On January 20–21, 2014, IDI convened the "Assembly of 200" of its Israel Speaks: Human Dignity initiative. This unique meeting brought together 200 Israeli citizens from all walks of life to partner in a historic, nation-wide effort to draft a Declaration of Human Dignity.

The text below, which has been translated from the Hebrew, is based on a compilation of the ideas that emerged from the working groups during the two days of the meeting. During the next stage of the project, this draft will be refined through an interactive process of virtual debate that will be open to the public. The final version will be signed by tens of thousands of Israeli citizens. 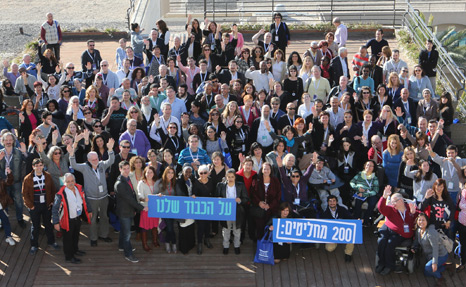 We, the citizens of the State of Israel—of every nationality, religion, race, sex, ethnicity, and other group affiliation—call for human dignity to be established as a foundation of Israeli society.

Based on our participation in a process of civic deliberation, we hereby proclaim that the following principles are essential for establishing human dignity as the foundational value of Israeli society.

The dignity of every human being will be respected in Israel.

The right to dignity must be permanent, absolute, and unconditional.

All human beings are entitled to dignity and must maintain the dignity of others.

The Citizens’ Role in Society and the State

Citizens are sovereign. It is incumbent upon them to take part in setting norms and values and to defend the right of every individual to express his or her personal opinions. At the same time, we must strive for organizations and citizens alike to fulfill their legal obligations fully, as prescribed by law and the relevant regulations.

Tolerance for Other People and Opinions

Israel is a Jewish and democratic state composed of different population groups that are distinguished by religion, politics, ethnicity, nationality, and gender. We must therefore recognize that all human beings have the right to be different. We must also defend their right to realize their unique identity, within the boundaries of the law and while preserving Israel’s unique character.

The Treatment of Different Groups in Society

The State of Israel, its institutions, and its citizens will treat all citizens equally and without discrimination, regardless of nationality, ethnicity, race, religion, sex, or affiliation with any other group.
Israeli society will be an inclusive society composed of different groups. The State and the groups within it will strive to achieve mutual recognition between all groups and to lessen the divisions between groups.

In Israeli society, the human dignity of each and every individual will be respected, regardless of his or her group affiliation.

Humiliation and degradation of any group or individual, no matter how different they may be, will be prohibited in Israeli society.
Special efforts must be made to respect the human dignity and rights of vulnerable individuals and groups, such as people with disabilities, the elderly, and children.

The dignity of non-citizens (including permanent residents and asylum seekers) must be respected as well.

Respect for human dignity is incumbent upon all Israeli institutions, including the security services.

Society assigns great importance and significance to the spiritual aspect of human life. Every person is free to choose and may live according to his or her own ideas and beliefs; every community has the right to maintain its traditions and to live according to its religion and customs. Members of different religions and faiths must conduct dialogue based on tolerance and mutual respect for the spiritual life, beliefs, and ideas of members of other creeds. Human rights will not be infringed in the name of the religious freedom of others.

The Relationship with the Establishment

Citizens will fulfill their obligations to the State of Israel and the State of Israel will grant rights to its citizens. The legislature will treat the entire population equally and respectfully; civil servants will not discriminate between different citizens and no preference will be given to officials or to influential individuals. Civil servants will be conscious of the need to accept different individuals and groups in society and will thus serve as an example for the entire population.

The Culture of Discourse

Israeli society will develop a culture of discourse that will be based on listening, self-control, compromise, and tolerance, which reflect the spirit of human dignity.

The diverse sectors of the population will conduct tolerant and accepting dialogue that is characterized by mutual respect and integrity.

Even in cases of disagreement, dialogue will always be respectful, fair, responsive, and moderate.

By virtue of their humanity, people must avoid the use of harsh and hurtful words, whether in interpersonal communications or in the dissemination of gossip or slander.

The media must be encouraged to present content that encourages a positive attitude towards different groups, towards cultural diversity, and towards the very existence of this diversity, and should stress its advantages. In addition, the various sectors of the population should be adequately represented in the media, which should strive to expose and disseminate information that will promote recognition and acceptance of the Other.

As individuals and as members of communities, citizens have a duty to shape the norms and values of political culture by means of open and tolerant dialogue with other individuals and communities, regardless of religion, race, or sex. Elected officials should be directly and actively involved in this process; their involvement will foster trust in government institutions.

The Economy and its Impact on Society

The State of Israel will create an economic policy that guarantees citizens a life of dignity, regardless of religion, race, or sex. This policy will pay special attention to disadvantaged groups in the labor market and will work to reduce wage gaps and to allocate national resources for social needs. The State and society will foster accessibility to employment for individuals with physical and mental disabilities and for the entire population.

The education system will endeavor to convey principles of human dignity at all levels and to all age groups, both to educators and to students, by means of exposing people to different groups and cultures, without passing judgment.

Any violation of human dignity is also a violation of the dignity of the offender. We strive for a society that internalizes and implements this principle and hope that the state will find active, innovative, and creative ways to foster fruitful and productive interpersonal discourse that promotes social integration.

State institutions will encourage personal encounters between members of the various sectors of society in order to promote respect for the Other.

Every person must accept the Other, who must be treated with respect and helped in times of need, without preconditions or judgment.

Every person in the State of Israel has a fundamental right to establish a family unit in keeping with his or her faith, culture, and personal preferences, provided that all the natural rights of the individual are upheld within the family. Israeli civil law will grant recognition to different types of family units.

The family is the basic framework for the education of the child. Parents must ensure the physical, emotional, economic, and cultural wellbeing of their children, and must request assistance from the authorities in times of need. Should parents fail to fulfill their obligations, the state must intervene to protect the welfare of the child within the family, always taking the family's religion and culture into account.

The State of Israel must facilitate an optimal combination of work and parenthood, regardless of the parent’s sex.