This event was conducted in conjunction with the Israel Prison Services

On Tuesday, January 13, 2015, IDI hosted a multidisciplinary symposium on the care for prison inmates who are HIV positive and prisoners who refuse to accept medical treatment. The initiative for the event came from the Inmate Division of the Israel Prison Service (IPS) and was warmly welcomed by IDI. The symposium was attended by Chief Commissioner Aharon Franco, the commander of the IPS, and IDI President Yohanan Plesner. Also present were the senior command echelons of the IPS, IDI researchers, and a multidisciplinary array of guest experts in medicine, public policy, law, medical ethics, and more. The discussion was moderated by Commissioner Ofra Klinger, head of the Inmate Division of the IPS, and IDI Vice President Prof. Mordechai Kremnitzer.

The Israel Prison Service is the official incarceration agency of the State of Israel and bears statutory responsibility for convicts, detainees, illegal aliens, and others held in custody by court order. It oversees over 30 incarceration facilities of various types and deals with tens of thousands of men and women who have been deprived of their freedom by the State.

IDI and the Israel Prison Service decided to establish a forum that will discuss various issues that arise in the course of the complex work of the Prison Service. This collaborative effort will enable IDI researchers and other scholars to learn about the work of the IPS from the inside, so to speak. As a result, they will be able to contribute to the debate within the IPS about respect for inmates’ dignity and the need to wield the authority and discretion that it has been given in accordance with constitutional principles and the balances that are derived from them, while bearing in mind the responsibilities of the Prison Service.

The first symposium of this joint effort began with the issue of caring for inmates who are HIV positive—an extremely small and powerless group. The discussions surveyed the developments and changes in this domain in recent years. One of the points made was that the risk of infection posed by inmates who are receiving medical treatment is extremely low. The discussion in this session focused on specific questions that relate to the way in which the Prison Service handles HIV-positive inmates, such as separating them from other prisoners at night for various reasons. It also focused on the need for the IPS to protect the dignity and privacy of HIV-positive inmates and deal with the stigma attached to carrier status in prison life, while at the same time bearing the responsibility for the safety of all those who enter Israeli prisons, including HIV carriers.

The second part of the symposium focused on how to deal with prisoners who refuse medical treatment, and presented medical, ethical, and legal dilemmas that arise in this situation.  Special attention was given to the fact that it is the inmate who is rejecting treatment and the prison bears responsibility for him or her. 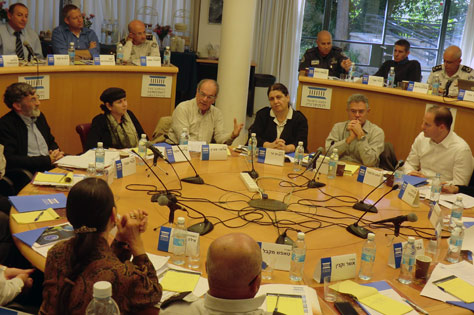