A highlight of the 2013 Eli Hurvitz Conference on Economy and Society was a Google Big Tent event sponsored in partnership with Google. The idea behind Google's Big Tent, which originated in London, is to bring together important people from the public, business, and private sectors to discuss hot topics about the Internet and its impact on society. The Big Tent provides an opportunity to take part in an inspirational meeting of leaders from diverse fields for a discussion of the question of how the State can boost technological innovation and how the principles of innovation from the world of the Internet can be adopted for the good of the whole of Israeli society.

The Google Big Tent at the 2013 conference brought together Doron Avni, Google's Senior Policy and Government Relations Manager for the Middle East; Meir Brand, head of Google Israel, and a panel of experts who discussed how the State of Israel can boost technological innovation and how principles of innovation from the world of the Internet can be adopted for the good of Israeli society. The panel discussion was followed by an interview with Vint Cerf, Chief Internet Evangelist and Vice President of Google, which was conducted in English, and a presentation by Noam Bardin, Google's Chief Wazer. The Google Big Tent was followed by a gala dinner

Video of the Google Big Tent can be found below. The interview with Vint Cerf is in English, while the other two videos have English audio translation. To watch the videos in Hebrew, visit the VOD Center. 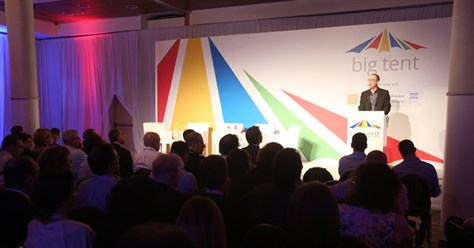 One on One with Mr. Vint Cerf, Chief Internet Evangelist and Vice President of Google