Israel Democracy Institute leaders responded Sunday with praise for an initiative to limit private legislation in the Knesset in exchange for increased oversight capabilities. Leaders said the proposal, presented by Knesset Speaker Yuli Edelstein and Ministers Ayelet Shaked and Yariv Levin as part of a framework to improve the Knesset, is a result of a current and untenable reality and that it aligns with previous recommendations by IDI, including a recent study on how to improve the work of the Knesset as a legislative and oversight body.

According to IDI’s most recent statistics, Israel holds the world record in private-member legislation, which harms the Knesset’s oversight work and the public’s trust in Knesset members. Moreover, MKs lack required tools to maintain proper oversight of the government’s work. Therefore, the recommendations presented are significant, but only part of a package that must be accepted in order to provide MKs with the resources they need.

According to IDI research, as of the beginning of February, some 3,800 private-member bills were submitted to the Knesset. This amount is much higher than the number submitted in the previous Knesset (2,921), and significantly more than in earlier Knessets, in which there were several hundred. In a comparative study of the amount of private legislation in 18 parliamentary democracies over the past 15 years, Israel leads by a huge margin – 23,000 over 15 years compared to a few thousand in other countries.

IDI scholars note the importance of bolstering the professional resources that are available to members of Knesset in order to oversee the government. As a part of such an "oversight package," more authority ought to be given to committees on issues of the budget of each ministry. The Knesset's Assembly could benefit by strengthening the queries and question and answer processes. Further, IDI recommends reducing the number of committees on which each MK serves, freeing them to do better work for the committees to which they are assigned. Currently, every member of the coalition is a member of an average of 3.5 committees that frequently meet at the same time.

Similarly, IDI recommends that the issue of holding hearings for appointments to top positions should be seriously evaluated before being implemented, as it could reduce professionalism and cause great harm to our political institutions if not handled correctly.

IDI President Yohanan Plesner said, “The initiative’s aim of strengthening Knesset oversight and minimizing private-member legislation is positive and even essential to Israeli democracy. The race to legislate should cease.

“However, the quality of these proposed changes can only really be judged after seeing their concrete details – and those details have not yet been published. This is especially true when it comes to whether the initiative will include holding hearings for appointments to top positions, which I think must be handled with extreme caution.”

Plesner added, “Since this proposal is designed to change the rules that govern the Knesset's ongoing conduct, opposition leaders should be included in the process with the goal of achieving a broad consensus over the proposed changes."

For a study on how to improve the work of Knesset as a legislative body, please click here (Hebrew).

For a comparative study of private-member bills in Israel to other countries, see chart below. 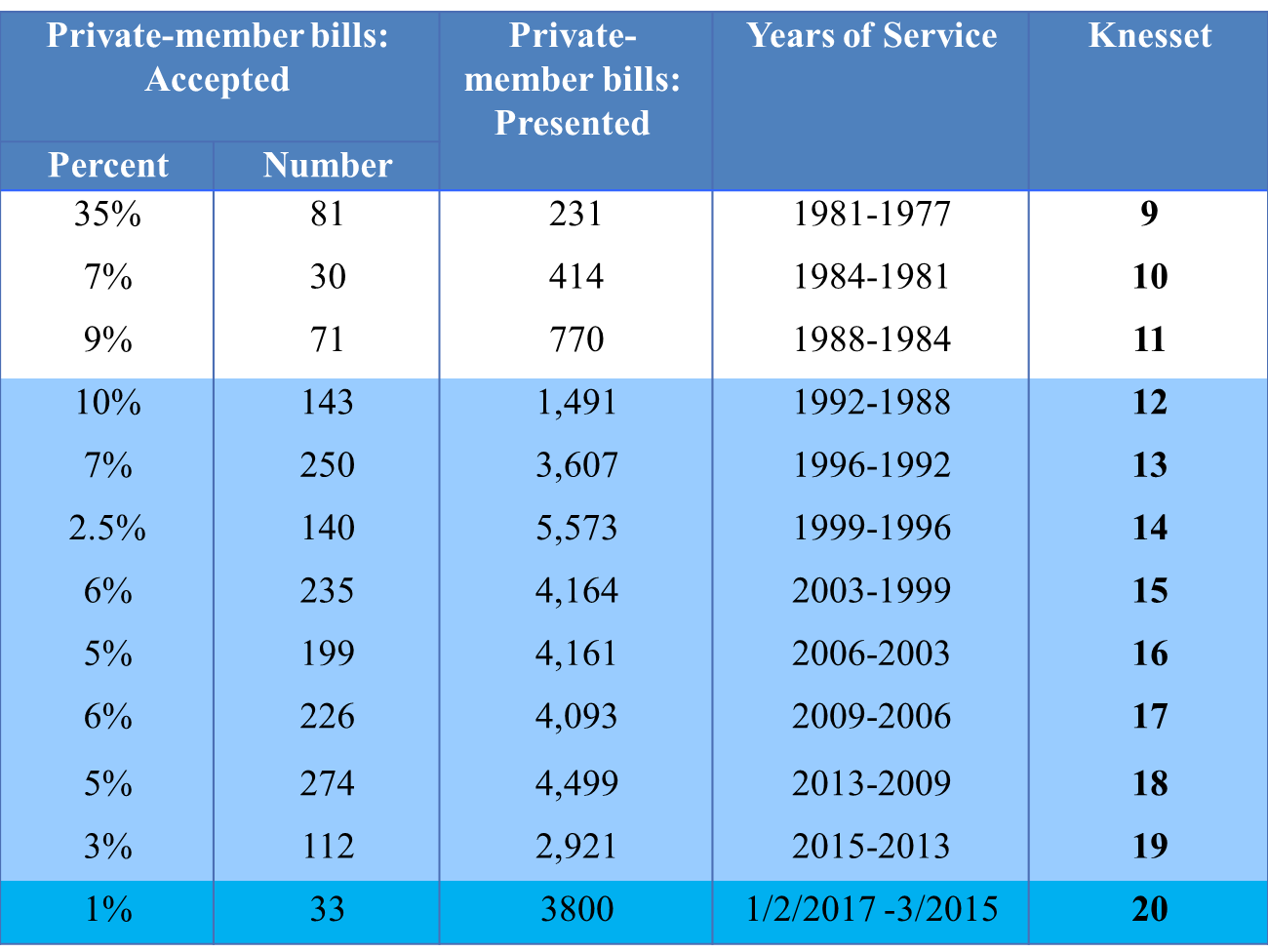 Private-member bills in the Knesset