The Israel Democracy Institute yesterday welcomed the recommendations of the Central Elections Committee to enable individuals to vote for the Knesset from polling stations not located in their neighborhoods, if they let the population registry know in advance. The proposal, which fits the recommendations of the IDI study, "Voter Turnout in Israeli General Elections," would lead to an increase in voter turnout and make it easier for many citizens who have had to choose between long trips and exercising their democratic right.

Dr. Ofer Kenig, head of IDI's political reform program, called upon the Central Elections Committee and the Knesset Law Committee to consider shortening the amount of time set for registering to vote in advance of an election; the proposal sets the amount of time at 71 days. Further, Kenig called for adopting additional recommendations that will help raise voter turnout and allow more people to exercise their basic democratic right to vote: enabling voting at the airport for those traveling abroad a number of days before an election and cautiously expanding absentee voting. A policy paper, "Reconsidering Israel's Overseas Absentee Voting Policy," was recently published following deliberations on the matter, which were led by Minister Yariv Levin.

Over the past decade, following a deep decrease in voter turnout, Israel has again seen voter turnout rise. However, in last year's election, the turnout was still almost 10 percent lower than it was in 1999.

See the chart below, which highlights voter turnout over the years. 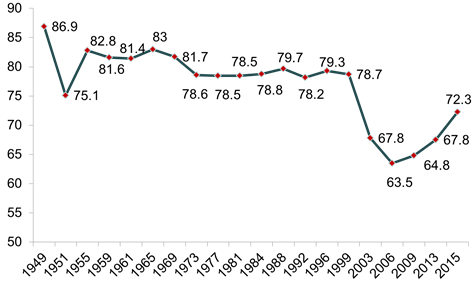