Ahead of today's meeting of the Ministerial Committee on Legislation, the Israel Democracy Institute (IDI) called for supporting a bill that will shorten the length of time allotted to form a governmnet after an election.

Ahead of today's meeting of the Ministerial Committee on Legislation, the Israel Democracy Institute (IDI) called for supporting a bill that will shorten the length of time alloted to form a governmnet after an election. The bill, which will be discussed at today's session, is in line with IDI's research on political and electoral reform.

IDI emphasizes this reform is only one in a list of changes that should be adopted to increase the ability to govern in Israel and bring about greater political stability. Other necessary reforms include adopting a bill that would atuomatically make the leader of the largest party the prime minister, cancelling the law that requires tenure of an incumbent Government to be dependent on Knesset approval of the State budget, and shortening the period between dispersing the Knesset and elections. IDI researchers have found that the period between dispersing the Knesset and forming the government after an election averages six months. This causes great damage to our country, because during this time there are no functioning ministers or budget and no foreign or security policy – the entire country is in a holding pattern.

In comparison to other countries, Israel is situated among the countries who have elections most often (an average of every 2.8 years since 1990). When you add campaigning time, the period it takes to form a government and to hand over ministries to new ministers, it is clear that implementing long-term policy planning would be very difficult. (IDI emphasized that shortening the period for forming a government would not increase the parties' capacity for extortion during coalition negotiations, because such talks usually only come to fruition in their final days.)

Plesner asked the ministers to support the bill and recommended they expand this first step to other areas of electoral reform.

"Shortening the time to form a government will save the economy three weeks of political spin and give the government back three weeks of worktime to focus on the public good," Plesner said. "However, making this change without other necessary reforms to the political system will not solve the central problem of political instability, which leads to a revolving door of ministers, governments that change too often, and unnecessary elections. Nevertheless, it is a step in the right direction that can be used as a basis for additional reforms to the electoral system that will strengthen stability and the ability of the government to function and implement its policies."

The following is a graph that shows the length of time it has taken from the decision to advance an election until the new government is sworn in (in 2001, the elections were only for prime minister). 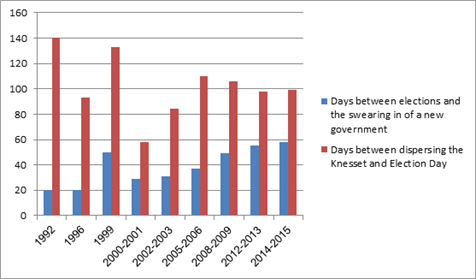