IDI responds to MK Aryeh Deri's resignation from the Economy Ministry, calls it, "a symptom of a governmental system that must undergo several structural changes in order to create long-term stability."

Responding to the resignation of Economy Minister Aryeh Deri and the expansion of his Ministry for the Development of the Negev and the Galilee into the Ministry for the Development of the Periphery, Negev and Galilee (referring to the areas outside the economic center of the country), the IDI said this is a step that emphasizes the unstable functioning of the Israeli government and its inability to carry out effective policies.

According to research compiled by Dr. Ofer Kenig, head of the political parties' research group of IDI's Forum for Political Reform in Israel, the Jewish state in comparison to any other country has the highest turnover among ministers and their portfolios in the first half of a government.

"It is acceptable to replace ministers in other democracies, but it is rare that these changes are made at the beginning of a term. This is because we expect a new government to work toward attaining the trust of its citizens and to provide stability to the country – at least the beginning of its tenure. We expect the members of the government who are granted important positions and portfolios to display responsibility for their new posts," said IDI President Yohanan Plesner. "There is no doubt that this rapid turnover is another symptom of a failed governmental system that must undergo several structural changes in order to create long-term stability."

In his research, Kenig explains that when comparisons are made between Israel and 19 other democracies, while in Israel there were six minister role changes made in the first six months of a new government, in most countries there were few or no changes at all during that same period. Although one cannot assume that the sole reason for these shifts is failure of the Israeli governmental system, it is not a coincidence. These changes impact the stability of the governmental framework, its ability to direct policy and the minimal contiguity needed for the proper functioning of a governmental system. 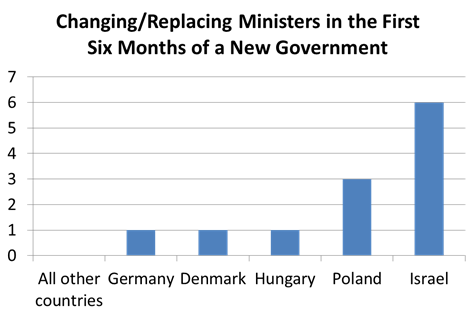