The majority (55%) of Jewish Israelis believe US President Donald Trump will allow the Israeli government to build new settlements, according to a poll released today by the Israel Democracy Institute and Tel Aviv University.

According to the latest Peace Index, the majority (61%) of the Jewish public also does not believe that Trump will try to impose a peace solution on Israel that goes against the government’s position.

When asked how they would describe the first meeting between Trump and Prime Minister Benjamin Netanyahu, the majority of Jewish Israelis (62%) and Arab Israelis (64%) described the meeting as successful.

This month’s index also focused on possible solutions to the Israeli-Palestinian conflict and how Israelis rank their top officials and other key aspects of their lives.

It was recently revealed in the media that in a summit last spring in Aqaba, Jordan, in which the leaders of Egypt, Jordan, and Israel participated, then-U.S. secretary of state John Kerry proposed an agreement to Netanyahu whereby Arab states would recognize Israel as a Jewish state in return for renewing the diplomatic negotiations on establishing a Palestinian state along the 1967 borders, with territorial swaps.

To the question “In your opinion, did Netanyahu act rightly or not rightly when he rejected this proposal?” a majority Jewish Israelis (57%) believe he acted rightly. However, there are large or even dramatic disparities between the political camps.
• On the right, 77% favored Netanyahu’s position of rejecting the proposal
• The center is divided, with a slightly higher rate for those who oppose rejecting the proposal (49% vs. 42% who supported the rejection)
• On the left, a huge majority says Netanyahu was not right to reject Kerry’s proposal (83%).
• Among the Arab interviewees, a majority (54%) thinks Netanyahu was not right to reject it.

Relatedly, some Israelis have been arguing that Israel should make a unilateral move toward peace, holding on to large settlement blocs in Judea and Samaria, the Jordan Valley and Jerusalem, while evacuating other parts of the West Bank.

The majority (54%) of Jewish Israelis oppose such a move.

THE RANK OF ISRAELI’S LIFE AND LEADERS

Two years after the 2015 elections, we asked interviewees to evaluate the performance of certain officials in the security domain. The top ranked security official by Jewish Israelis is Chief of Staff Gadi Eizenkot; 64% of Jewish Israelis ranked him “good” or “moderately good.”
(Note: Part of the survey was conducted on the day before the state comptroller’s report on Operation Protective Edge was published, and part of it on the evening after it was published.)

The Jewish public’s rank of all other security officials is medium or lower.

The majority of Israelis (52%) rank Netanyahu’s performance as “not very good” or “not good at all.”

We also gauged the public’s evaluation of Israel’s situation in six key areas:

The Peace Index is a project of the Evens Program for Mediation and Conflict Resolution at Tel Aviv University and the Guttman Center for Public Opinion and Policy Research of the Israel Democracy Institute. This month's survey was conducted by telephone and on the internet on February 26-27, 2017, by the Midgam Research Institute. The survey included 600 respondents, who constitute a representative national sample of the adult population aged 18 and over. The maximum measurement error for the entire sample is ±4.1% at a confidence level of 95%.

To view the full survey questionnaire and commentary, visit www.peaceindex.org/english.

Diagram of the month: And how would you define Israel’s situation at present in these domains: security, economy, foreign relations, education, health, social responsibility (Jewish public, %, moderately good or very good, by political camps) 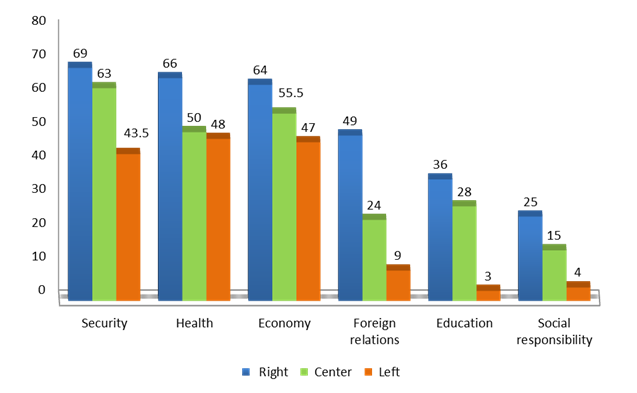