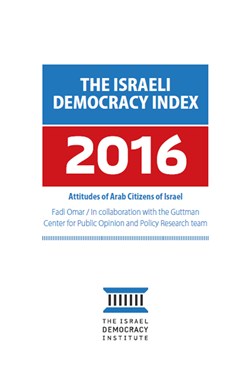 Based on the findings of the 2016 Israeli Democracy Index, this tract provides insights into the attitudes of Arab citizens of Israel, specifically with regards to major political and social issues

This booklet is a detailed supplement to the 2016 Israeli Democracy Index and a stand-alone work. Based on the findings of the 2016 survey, this tract provides insights into the attitudes of Arab citizens of Israel, specifically with regards to major political and social issues.

The Arab public is the largest national and religious minority in Israel, comprising approximately 15 percent of the country's total population – ages 18 and over. In order to conduct an in depth analysis of this community's various opinions and more accurately connect the items on the survey's questionnaire to respondents' background variables, we expanded the sample size in the 2016 survey. Whereas in the past, we conducted around 157 interviews with Arabs (approximately 15 percent of the general sample), we included surveys of 362 Arab respondents in 2016 (approximately 29 percent of the general sample).

This change, implemented in parallel to the surveying of the wider Israeli society, is part of an ongoing research effort by the Guttman Center to reliably track the attitudes of the country's various sub-groups. As such, this booklet shows what insights could be gleaned from the detailed analysis of one particular community, specifically the Arab public in Israel, in 2016.

The brochure presents a comprehensive deconstruction of the answers given to some of the questions asked in the 2016 Israeli Democracy Index survey, revealing a variety of responses, based on such variables as respondents' income, education and residence.