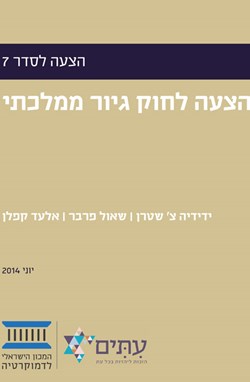 A Proposal for a State Conversion Bill

Legislation drafted by the Israel Democracy Institute and ITIM that is designed to serve as the legal framework for state conversions and to address the crisis of conversion in Israel.

The conversion system that exists in Israel today is not anchored in Israeli law. For this reason, the Israel Democracy Institute and ITIM: Resources and Advocacy for Jewish Life have drafted new legislation that will serve as the legal framework for conversions in Israel. A summary of the main points of the proposed legislation can be found below.

Between 1989 and 2004, nearly one million immigrants from the former Soviet Union became citizens of the State Israel. Roughly a third of these citizens are not recognized as Jews by the Israeli Rabbinate. The issue of converting these immigrants—as well as other non-Jews in Israel—is one of the most pressing issues on the agenda of Jewish society today, both in Israel and abroad.

Because of the complexity of this controversial issue and its national, personal, and societal dimensions, it is critical that conversions be recognized by the state and universally accepted. Converts must know that there are no doubts about the validity of their conversions and they must be accepted as full Jews by both the State of Israel and members of Israeli society.

The conversion system that exists in Israel today, which consists of several conversion courts supervised by the Ministry of Religious Services, was established by means of a Government resolution passed in 1998 but is not anchored in Israeli law. For this reason, the Israel Democracy Institute and ITIM have drafted new legislation that will serve as the legal framework for conversions in Israel: The State Conversion Law.

The Goals of the State Conversion Law

Key Points of the Legislation

The proposed State Conversion Bill does not address the religious aspects of conversion: It does not favor one halakhic interpretation over another and does not affect the State of Israel's current recognition of non-Orthodox conversions that are performed abroad or in Israel. According to this proposal, rabbis serving in public positions will head the conversion courts, and these rabbis will represent a range of halakhic voices. The bill will achieve its objectives because it stipulates that the State will automatically issue a valid conversion certificate, but will do so only in cases of people who convert in a rabbinical court headed by a senior rabbi appointed by the Chief Rabbinate of Israel.

The bill creates a mechanism that protects converts from nullification of their conversion (except in extreme cases) and from refusal to register them for marriage. It seeks to make conversion a national priority that will be addressed seriously and responsibly in Israeli society. This is our obligation to future generations in Israel.

This proposal was written by the Israel Democracy Institute and ITIM: Resources and Advocacy for Jewish Life under the auspices of IDI's Religion and State project, directed by Prof. Yedidia Z. Stern.

Find out about IDI's participation in the Tzav Giyur Coalition.

Tags:
Conversion to Judaism,
Who is a Jew?,
religion and state,
Religion and State