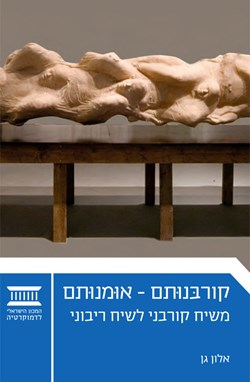 From Victimhood to Sovereignty

An Analysis of the Victimization Discourse in Israel

An attempt to discover the allure of victimhood, explore the price that Israeli society pays for the role that the discourse of victimization plays in shaping Israeli identity, and propose a discourse of sovereignty as an alternative medium for cultivating personal, social, and national identity.

In recent years, victimhood has been all the rage. Philosophers, writers, artists, academics, filmmakers, and playwrights have turned their victimhood into a tool of their trade portray themselves as victims. Everyone adds his or her own persecution to the bonfire of victimization and fans the flames.

Written by Dr. Alon Gan, this book is an attempt to discover the allure of victimhood and highlight the price that Israeli society pays for the increasingly prominent role of the discourse of victimization in the shaping of Israeli identity.

The second part of the book contemplates the ideal situation and proposes a discourse of sovereignty as an alternative to the discourse of victimization. According to the author, it is worth cultivating, developing, and assimilating a discourse of sovereignty into Israeli public discourse because its liberating potential can only be realized if it is incorporated into diverse fields, including psychology, literature, education, politics, philosophy, and sovereign identity.

The approach presented in this book calls for developing a sovereign road map for cultivating personal, social, and national identity through the prism of sovereignty rather than the prism of victimization.

This publication was was made possible by the generous support of the Goldhirsh Foundation.

In recent years, victimhood has been all the rage. Philosophers, writers, artists, academics, filmmakers, and playwrights have turned their victimhood into a tool of their trade and offered society profuse accounts of their lives as victims. Everyone seeks admission to the Israeli shrine of victimization, which keeps growing and expanding until it has attained the dimensions of the Tower of Babel, full of survivors who compete about who suffered more at the heavy hand of the repressive and obliterating enterprise of the Zionist/ male/ European/ colonialist/ Ashkenazi establishment, and so on. Phrases like “steamroller of oppression,” “control mechanisms,” “obliteration,” “product,” “victimhood,” “exclusion,” “alienation,” “the Other,” and “the establishment” recur time and again in the discourse of victimization, like a mantra. Everyone adds the twig of his or her own persecution to the bonfire of victimization until the flames leap halfway to heaven.

The present volume is an attempt to discover the secret charm of victimhood and highlight the price that Israeli society pays for the increasingly prominent role of the discourse of victimization in the shaping of Israeli identity. The age of the “end of ideology,” followed by the Postmodern Era, made a major contribution to the ascendance of welcome and worthy processes. The inclusion in the public discourse of an echo and expression of the voice of the Other; the shining of the spotlight on all those who are excluded, silenced, and disempowered; the identification of the diverse modes of control, repression, and alienation practiced by the hegemons and ruling elites: all these have been a godsend for those who want to make the world a better place.

But it seems that the monster has turned against its creator. In recent years, we have witnessed the paralytic power of the catharsis of self-pity. A ritual of purifying confession has emerged and caused many victims, along with many of their learned advocates, to channel their energies into impressive descriptions of the maladies that beset the world instead of directing them towards accepting responsibility for changing the situation. It’s like the eleven-year-old boy who was sent to a psychologist because he was still wetting his bed. After a year in therapy, when asked how he was, he answered, “wonderful!” “You mean you’ve stopped wetting your bed?” “No,” he replied, “but I don’t feel guilty about it any more.”

The syndrome of therapeutic victimhood has transmuted the discourse of victimization from one that heals to one that perpetuates. The welcome and unavoidable need to give substance to the voices of the excluded, the silenced, and the victims, so that they can be heard, has changed its goal: instead of creating a consciousness of victimization as a means to escape the situation, we now have a victim mentality that aims to enjoy the fruits of the situation and entrench itself in the status of victim—as a means of perpetuating it, as a way to avoid accepting individual and social responsibility for amending the situation, and as a badge of honor that confers economic, psychological, and political benefits.

When does the protest against exploitation and the emphasis on the mechanisms of injustice and repression turn from being a means to improve society to a goal in its own right, such that one could almost say that it depends on the continued existence of injustice so that it can describe it?

What is more likely to improve society—a description of the intensity of the injustices wreaked by the victimizer, or an attempt to trace the victim’s ability to endow his/her life with a rationale and meaning and thereby escape victimhood? Although it is clear that the two approaches are complementary, the victimization current produced by Postmodernism seems to have intensified the first element and almost totally abandoned the second element.

The Postmodern enterprise of deconstruction disassembled the individual and turned her into a victim—a passive product of circumstances, a submissive object that can be manipulated and controlled by the hegemons. This enterprise has forgotten or hidden away the humanist tradition that rests on the sovereign human being who is his own lawgiver—the tradition that begins in the Bible (“choose life”), proceeds through Aristotle (man as a political animal) and the Talmud (“man and the world hang in the balance”), was taken up in the Renaissance by Pico della Mirandola in his Oration on the Dignity of Man (“you may, as the free and proud shaper of your own being, fashion yourself in the form you may prefer”), and finally reached the young Karl Marx, who reminded all of us (in his Theses on Feuerbach) that man is not merely the product of his circumstances, but also their producer.

The discourse of victimization casts the full weight of responsibility for the condition on the Other—in this case the controlling, hegemonic, occupying, and repressive Other—and creates a problematic and dangerous equation: “they”—the “victimizers”—are perceived as constantly active, producing, and manipulating, whereas “we”—the “victims”—are held to be always passive, produced, and manipulated. A linguistic analysis of the lexicon of the discourse of victimization reveals that the victimizers always appear as the subjects of verbs such as “conquered,” “crushed,” “obliterated,” “invaded,” “liquidated,” or “conducted an experiment”; whereas the victimized are always described as objects, as “refugees,” “products,” “disabled,” “stifled,” “obliterated”—and, of course, “victims.”

In other words, the same humanist tradition that sees man as sovereign, the shaper of his own image, and lawgiver for himself, applies only to the victimizers and never to the victims.

The first part of this book analyzes the fundamental components of the discourse of victimization:

The discussion focuses on four Israeli cases of the discourse of victimization:

An analysis of these cases allows us to discern the similarities between the different groups in their adoption of the victimhood discourse and its erection into a central pillar of their identity.

After the analysis of these four cases and presentation of the Israeli victimhood discourse as another link in the ever-stronger “culture of complaint” throughout the world, we turn to examine the language of victimization and the added value obtained from adoption of the victim mentality. Where does the charm of victimhood draw its power from? Why do individuals and groups want to take on the victim identity?

The second part of the book moves from analyzing what exists to contemplating the ideal situation and proposes a discourse of sovereignty as an alternative to the discourse of victimization. The sovereignty alternative deserves to be cultivated, developed, and assimilated into the Israeli public discourse in order to realize the liberating potential inherent in highlighting the element of sovereignty in diverse fields of discourse, including psychology, history, literature, education, politics, philosophy, and sovereign identity.

This approach can provide instructions for drawing a sovereign road map to constitute the individual, social, and national identities by replacing the victimization spectacles with those of sovereignty.

The volume focuses on seven types of sovereignty.

In his fierce criticism of the obscurantism of the ghetto and Diaspora life in general, Micha Josef Berdyczewski begged, “Give us back the lovely trees and fields! Give us back the world!” It seems that the time has come for us to say: We must bring back the sovereign human being! We must restore responsibility and free choice to the public discourse! Give up the discourse of victimization and the cult of cathartic self-pity and make room for the effort to improve human beings, improve society, and improve the world by those who would be masters of their own fate! Let the victims be shapers rather than shaped, subjects rather than objects, those who give substance to man’s preeminence rather than wallow as suicidal victims!

Dr. Alon Gan is involved in research on the development of Israeli identity over time. He is a lecturer at the Kibbutzim College of Education, Technology and the Arts and was a researcher at the Israel Democracy Institute when he wrote this book.

This book was published under the auspices of IDI's Nation State project, which was headed by Prof. Anita Shapira.