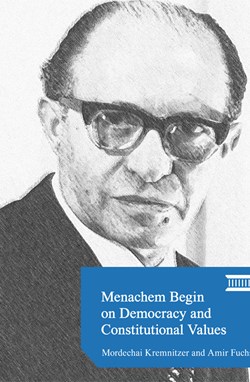 Although some in Israel hold nationalism and liberalism to be mutually exclusive, former Israeli Prime Minister Menachem Begin was both a proud nationalist and an unwavering guardian of liberal principles. As the Jewish world commemorates the 20th anniversary of Begin's death, IDI is pleased to present "Menachem Begin on Democracy and Constitutional Values," a booklet by IDI Vice President Prof. Mordechai Kremnitzer and Attorney Amir Fuchs, which was originally published in Hebrew on the eve of Yom Kippur, 2011.

Many people in Israel today think there is a contradiction between a nationalistic worldview and a liberal-democratic worldview; as they see it, the more nationalistic people are, the less committed they are to democracy, and vice versa. In addition, many people think that concern for national security and support for human rights are mutually exclusive; as they see it, the more people are concerned for security, the more they are prepared to forgo human rights when those two sets of values come into conflict, and vice versa.

This booklet, which was originally published in Hebrew and distributed with the Israel Hayom newspaper on the eve of Yom Kippur, disproves the two misconceptions  mentioned above by exploring the philosophy and actions of the late Prime Minister Menachem Begin—an uncontested nationalist with an unwavering commitment to Israel's security. As will be seen from the quotations that the booklet cites and the vignettes that it presents, Menachem Begin was a democrat and liberal par excellence, and consistently upheld human rights even when he felt they conflicted with national security.